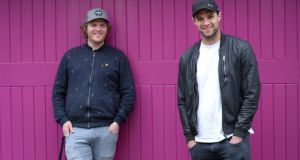 Niall Breslin (Bressie) and Dec Murphy of the Blizzards, who will perform on New Year’s Eve. Photograph: Dara Mac Dónaill

The countdown to the new year starts on Friday in Dublin with a three-day programme of events including concerts, acrobatics, a “light projection display” – but no fireworks.

Luminosity, a free event at the Custom House, involves a 3D light projection display running from 5pm to 10pm on Friday, and 5pm to midnight on New Year’s Eve and New Year’s Day, with animation and live performances at the riverside each evening.

On the other side of the city at St Stephen’s Green South, a New Year’s Eve countdown concert has a line-up featuring Walking On Cars, The Blizzards, Brian Deady and Little Hours. Tickets cost €27.90.

Also on Friday Colm O’Regan will host a poetry “slam” at Magistorium on South Anne Street where poets compete for the “slam champ” title.

On New Year’s Day a free concert will be held at St Stephen’s Green South from 2pm involving the Dublin Gospel Choir and the Garda Band.

A number of other free events will be held over the weekend on streets including St Stephen’s Green, Meeting House Square, O’Connell Street, Henry Street, Grafton Street, Custom House, with artists including fire performance artists Those Fire Guys and acrobats Dublin Circus Project.

Event and ticket information is available at nyfdublin.com.