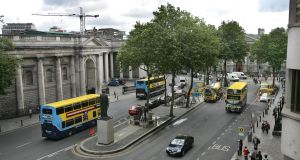 Dublin Bus drivers do not issue change on buses. If a passenger does not have the correct change to pay their fare, a bus driver will issue the passenger with a refund ticket or slip. File photograph: Matt Kavanagh

Over €800,000 worth of Dublin Bus receipts remain unclaimed by passengers this year.

The unclaimed refunds relate to Dublin Bus asking for exact change for their fares when a passenger uses a bus.

Dublin Bus drivers do not issue change on buses. If a passenger does not have the correct change to pay their fare, a bus driver will issue the passenger with a refund ticket or slip.

A Dublin Bus spokeswoman said the average annual unclaimed receipts value is €1 million, and that the percentage of the total passenger change fund which has been reclaimed to date this year is about 17 per cent.

The numbers claiming the receipts back has fallen since the height of the recession.

The spokeswoman said the money is held in the unclaimed Passengers Change Fund and a rolling fund is retained in order for customers to reclaim their change at any time, so there is no expiry date on the change tickets being issued to customers.

Customers can reclaim their change by submitting their receipts at Dublin Bus Head Office on O’Connell Street. They cannot be posted in or emailed, and the refund can only be issued in person.

Since 2003, Dublin Bus has been returning a percentage of the unclaimed money to local communities through the Community Support Programme.

Each year, grants are awarded to Dublin charities and voluntary groups as part of the programme. To date, over 1,800 groups across the GDA have benefited from the programme.