Mortgage code will not force borrowers off trackers 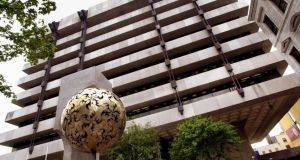 Banks will not be able to force distressed borrowers off tracker mortgages unless they engage in meaningful write downs. or provide alternative arrangements of real benefit to those in arrears, under a new code of conduct.

The code, published this morning, will not allow the State’s lenders to fast-track home repossessions, the Central Bank has said.

Critics of the new code have accused the regulator of “rolling over” under pressure from the State’s banks but the Central Bank insisted last night that its new proposals would allow borrowers and lenders to reach more sustainable solutions.

The bank said it hoped that a significant number of new deal would be being done on mortgage arrears before the end of the year.

Figures published last week by the Central Bank highlighted the scale of the mortgage arrears crisis. They showed that 12.3 per cent or nearly 100,000 mortgages had fallen behind in payments for more than 90 days by the end of March.

Moratorium
A 12-month moratorium on legal action against people in arrears contained in the old code, published in 2010, has been removed and instead homeowners who have exited the Mortgage Arrears Resolution Process without reaching a deal with their bank, will have between three and eight months before legal action can be taken against them.

This is a significant change from draft proposals published last week which gave all homeowners not part of Marp a window of just two months before legal proceedings could begin. The limit on the number of unsolicited contacts a bank can have with a borrower in arrears has been lifted. Instead they are to be permitted a “proportionate” level of contact.

The Central Bank’s director of consumer protection Bernard Sheridan admitted that this definition was open to interpretation and accepted that the lack of clarity in the clause was “a concern”.

Contact ceiling
However, he said the contact ceiling had been removed because there was “an issue of non-co-operation and lenders need to be able to make every effort to get borrowers in arrears into the system otherwise they face repossession”.

Another change will see banks given the go-ahead to make unsolicited calls to the homes of people in arrears if they do not engage with their banks, and while Mr Sheridan said he understood this could put already distressed borrowers under real pressure, the “alternative is not to make contact and instigate legal proceedings”.

Under the new code, lenders will be able to take borrowers off tracker mortgages in certain circumstances. However, the Central Bank insisted this could only be as a last resort and when it will be of benefit to borrowers.

“No doubt the lenders would prefer more options to move people off trackers but to do so they have to offer a lender an alternative which is affordable and sustainable,” Mr Sheridan said.

“It is only to be used as a last resort when the alternative is repossession and the only way such a mortgage can be made sustainable is by reducing the loan amount,” he said.

David Hall of the Irish Mortgage Holders Association reacted angrily to the code and said it was “reprehensible that the Central Bank was rolling over and giving the banks everything they want”.