The Irish Times Data Blog digs deep into complex data and statistics to generate illuminating information on a wide variety of topics, from baby names to NCT fail rates. 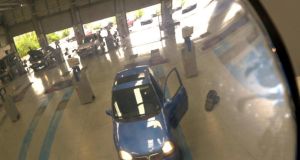 The ageing national fleet – now 8.5 years, on average – and the cost of maintenance are likely to be key factors behind the increase, according to experts.

The NCT test is mandatory for cars more than three years old.

Levies from the test have risen sharply over recent years, with motorists paying more than €19 million in testing fees during 2013. The fee for a full test is €55 and a re-test costs €28.

Latest figures show a variation of almost 30 per cent in pass and fail rates across the 47 test centres nationally.

The average pass rate per centre was 48 per cent. One of the highest pass rates was recorded in Cahirciveen, Co Kerry (67 per cent), while one of the lowest was in Carrick-on-Shannon, Co Leitrim (39 per cent).

The full results are available at Irish Times Data, a new data journalism blog at irishtimes.com.

The private operators of the NCT, Applus+, did not respond to numerous requests for a comment on the reasons behind the gap in outcomes.

The Road Safety Authority, which oversees the testing regime, points to a range of factors such as the average age of vehicles tested at individual centres, their mileage, maintenance and the condition of local roads which can lead to a variation in the figures.

In addition, it said the testing system and vehicle inspectors are subject to independent audits carried out by the AA.

“All test centres receive frequent unannounced visits, during which independent re-inspections of vehicles are carried out and vehicles inspectors are observed undertaking tests. These show that over 98 per cent of tests are correctly assessed,” it said in a statement.

An Irish Times analysis of the 1.2 million cars tests in 2013 also show significant variations in outcome among different vehicle makes and models.

Among the 20 most-tested car brands, Toyota had the highest pass rate (51 per cent), while Renault has the lowest (39 per cent).

The study also examined the performance of the top 10 selling car models in 2009, which were due for their first tests in 2013.

When 10-year-old versions of the same models were tested, the Toyota Yaris came out on top again (64 per cent), followed by the Corolla and Mondeo (both 63 per cent).