Rising rents, in particular in Dublin, are main driver of increase over 2014 rate 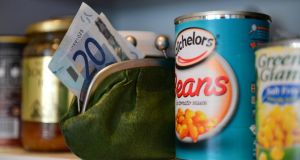 The minimum hourly living wage a person needs has been put at €11.50 an hour by the Living Wage Technical Group, an increase of 5 cents on the 2014 rate. File photograph: Bryan O’Brien/The Irish Times

People in Ireland need to earn almost €450 a week to be able to afford an acceptable standard of living, according to new research to be published this morning.

The minimum hourly living wage a person needs has been put at €11.50 an hour by the Living Wage Technical Group, an increase of 5 cents on the 2014 rate. The rise has been driven by changes in the cost of living and changes in the taxation system over the past year.

The Republic of Ireland Living Wage was established in 2014 and is part of a growing international set of similar figures which reflect a belief across societies that individuals working full-time should be able to earn enough income to enjoy a decent standard of living.

The living wage has been calculated by a Living Wage Technical Group with experts from the Vincentian Partnership for Social Justice, trade unions and other groups.

It is calculated based on the cost of 2,000 expenses typically faced by households including accommodation costs, food, energy, transport, clothes and other services.

The rate of €11.50 means a living wage is one-third higher than the minimum wage in the Republic, which is set at €8.65 an hour for an adult.

An 18-year-old in their first year of employment can be paid just €6.92 an hour.

Over the past 12 months, there have been reductions in the cost of health insurance and the cost of transportation, and energy costs and food prices have also fallen, the research shows.

These reductions combined put downward pressure on the living wage. The reduction in the Universal Social Charge in the last budget had a similar effect.

However, these effects were overshadowed by increases in housing costs, more expensive household goods and services and higher car insurance. Rising rents, in particular in Dublin, were the main driver of the hourly increase.

School kids get the measure of trees and their benefits 13:56
Varadkar says Sinn Féin rallies a ‘campaign of intimidation and bullying’ 13:38
Coronavirus: Irish citizens advised not to travel to Italy’s affected areas 13:34
Boy injured after collision with school window settles action for €45,000 13:30
Couple charged with murder of man in his Cork city home 13:16