Has your home insurance gone through the roof? Then switch

You can make savings of more than €400 by taking a few minutes to change insurance providers, but surprisingly few people are shopping around 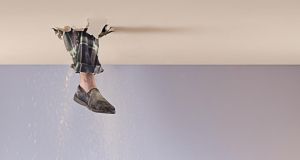 ‘Many consumers may be needlessly paying more for their cover.’ Photograph: Getty Images

What would you do for 400 quid? How many hours would you spend hanging on the telephone or sifting through paperwork for that kind of cash?

Unless you are among the super-rich or the super-lazy, chances are you would be happy enough to do 30 minutes of not very taxing work if someone told you you’d get €400 at the end of it, right?

Wrong. Last week, the National Consumer Agency published its annual survey on home insurance. It found that shrewd consumers who shopped around could save more than €440 on such policies.

The consumer body rang eight different companies armed with information on a range of property types throughout the country. Based on companies willing to provide a quote, the average saving to be made came in at a not too shabby €264.

The biggest saving of €421 was found on an insurance policy for a fictional three-bedroom bungalow in Midleton, Co Cork. In this instance the cheapest quote was €279, while the most expensive was €700. The average quote for the Midleton house was €403.

The largest percentage difference in quotes was 162 per cent on a three-bedroom semi in Newbridge, Co Kildare. In that case the cheapest quote was €237, while the most expensive was €622. The average quote in that area for that property was €330.

The numbers themselves are striking, but even more remarkable is the reluctance many people still have when it comes to shopping around for better value on this most basic of financial products.

According to the National Consumer Agency, only 37 per cent of consumers had bothered to check if there was a better deal available for their home insurance over the previous 12 months. And just over one in 10 actually switched home-insurance provider last year. With 1.5 million homes in the Republic of Ireland, that means more than 1.2 million people turned their noses up at substantial savings last year and collectively wasted hundreds of millions of euro.

The benefits of switching

Ciarán McHugh is not one of them. He discovered the benefits of switching two years ago when he managed to knock about €700 off the annual cost of health insurance for his family by moving from a long-established provider to newcomer Glohealth. Then, last year, a home- insurance policy he had on a second property came up for renewal.

“It used to be our family home, but when we wanted to move it was so deep in negative equity there was no chance we could sell it, so we were forced to hang on to it,” he says. “We had to rent it out, and, while it is not exactly washing its face, we are not as badly off as some people.”

Making savings where he can is important, so, when the time came to renew his house-insurance policy, he rang the bank he had his mortgage with. Months earlier, when he had rung to tell them of the change in status of the property from owner-occupier to rental, they had mentioned something about offering house insurance.

“I had a long-standing policy which I had taken out with 123.ie, and they were quoting me €400. I rang KBC, and straight away they knocked €50 off the premium and then another €50 because I had my mortgage with them. It is not a huge amount of money, I know, but it’s better off in my pocket than anyone else’s.”

Switching in the home-insurance market is very easy, much more so than in other sectors. Despite what companies say, moving from one bank to another is a hassle, and there are often fears associated with changing health-insurance provider, even if they are misplaced. But when it comes to home insurance, the fear and grief should subside faster than a house in a flood plain.

The National Consumer Agency’s Fergal O’Leary said as much at the launch of the body’s price comparison. He pointed out that 83 per cent of those who switched home insurance told the agency they found the process easy.

“This survey clearly shows that consumers can make significant savings on the cost of their home insurance if they take time to see what options are available in the market,” he said. “Combining these findings with the results of our insurance comparison indicates that many consumers may be needlessly paying more for their cover.”

When it comes to shopping around, the most important thing is to understand the policies you have and to ask if they are doing what you need them to do and represent value for money (see panel).

“It is very important when comparing home-insurance quotes to not just compare prices but also excesses, benefits and key terms and conditions,” says O’Leary.

“Consumers rarely think about making a claim when buying insurance, but if we take a little time to make sure we understand the key details of our cover when taking out a policy, any problems can be avoided if the worst does happen.”

Companies such as Getcover.ie make shopping around fairly simple. It can point people to quite substantial savings, although you need to be sure you are paying for what you need.

And shopping around might not even be necessary: sometimes the easiest way to get cheaper insurance is to chance your arm. A study of home-insurance published last year by the National Consumer Agency found that more than three- quarters of all companies are willing to negotiate with existing consumers on their renewal quote if they secure a cheaper quote elsewhere.

So what is to stop you ringing your insurance company and telling it that a rival company is willing to undercut it by 20 per cent? If they say no, then you can start shopping around.

The National Consumer Agency found that the terms and conditions, benefits and excess amounts varied significantly across the main home-insurance firms.

The standard excess varied €250-€500, while all eight providers had higher excesses for water damage and subsidence claims.

In all instances, the excess for water damage was at least twice that of the standard excess and ranged from €500 to €1,000.

More often than not, insurers operate on a “new for old” basis, but not always, and when it comes to floor coverings, clothing, and fabrics, they can sometimes apply a deduction for wear-and-tear or depreciation.

Most companies apply the “average clause” in the case of underinsurance; for example, if the contents of a property are worth €40,000 but they are insured for just €20,000, then the consumer is underinsured by 50 per cent.

In this case, if contents are damaged, destroyed or stolen, the most the consumer will get from the insurance company is 50 per cent of the total damage.