Too much hassle or laziness? No matter how badly banks treat us, we won’t leave them 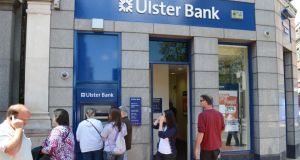 Greedy or stupid bankers (or both) brought this country to its knees and the institutions continue to make fools of us by harassing distressed borrowers with impunity, reducing the level of customer service they offer and imposing ever higher charges on people who have already dug very, very deep to bail them out.

Yet no matter how badly they treat us, we won’t leave them.

Research by Amarach Consulting last year shows that Irish consumers are four times more likely to switch car insurance provider or utility company than their main current bank account and, according to a study by the National Consumer Agency (NCA) this month, just 4 per cent of Irish consumers switched banks last year.

So 96 per cent of us stayed loyal to our bank despite the fact that they did absolutely nothing to deserve that loyalty? That’s mad, Ted. The most striking recent example of this misplaced loyalty centres on Ulster Bank. In June last year the State’s third largest bank effectively stopped working. Hundreds of thousands of its customers were frozen out of their accounts for weeks while it made a pig’s ear of dealing with what it claimed was “a technical glitch”.

Promises about a solution were made and repeatedly broken, direct debits went unpaid, salaries never landed in accounts and online access disappeared.

Short of calling around to each customer’s house and spitting in their face the bank could not have shown more disrespect to the people who trusted it.

Yet in spite of this catastrophic failure when payback time came the vast majority of its customers stayed put.

“We anticipated a mass exodus from that bank last summer,” says Mark Nolan, managing director of Amarach. “But it never happened. What happened instead was post-rationalisation kicked in and people started telling themselves that all banks were the same and it could have happened to any of them.”

If we won’t switch in those circumstances when will we switch?

“Put simply, people don’t care enough to make the switch and they don’t think there is a blind bit of difference between banks,” says Nolan. “We are, ultimately, impatient and lazy – even waiting a half a second for a webpage to load is too much for some people, even having to read a form is seen as too much effort. It is the human condition.

“We all know what we should do but we don’t do it. When it comes to switching banks there is always going to be paperwork, and if many consumers have to do anything more than push a button or sign a form they don’t want to know – the mental bandwidth needed to make the change is just not there.”

The inertia is also partially down to fear, according to David Kerr of comparison website bonkers.ie “There is a huge fear of important things being overlooked. People are afraid that if they make a switch direct debit payments will get missed or wages won’t get lodged into their accounts.”

He says the fear, while understandable, is misplaced. “In every circumstance people should take care of their bills and make sure they are not paying more than they have to. If we don’t do that then the banks will continue to extract money from us and they will never be incentivised to give us better value for money.”

And can money be saved by switching?

Yes, as it happens. In April, Permanent TSB introduced a current account that is effectively free to anyone who earns more than €1,500 a month once their wages go in. Someone switching from one of the pillar banks to this account will save anywhere between €100 and €150 a year – it is not a huge amount but better off in your pocket than a bank’s, no?

With 30,000 people moving to his bank in the first half of the year, PTSB spokesman Niall O’Grady is delighted with himself, although he accepts even greater numbers could be moving.

“There are a couple of barriers. People think it is too much hassle and they are afraid they will leave their credit record behind. Neither of these things is true.”

About half of the people who have made the switch so far have used the switching code which obliges the closing bank to transfer all direct debits and standing order to the new bank. “We knew that some customers would think it was too much hassle even with the code so we created switching buddies,” he says. These buddies are a dedicated team based in Dublin whose sole job is to hold people’s hands as the move through the process.

He also dispels the notion that leaving a bank you have been a customer with for many years will somehow cost you your credit rating. “If someone has a good record we will be able to access it from the Irish Credit Bureau” and it is not like there are any real relationships between branches at local level and their customers any more.

Of course the PTSB move begs a big question. If it can make a business case for free banking why can’t the other banks do the same thing? Why are Bank of Ireland, AIB and Ulster Bank hitting their customers hard with new charges?

“The difficulty for our competitors is they have a massive revenue stream from their existing customers so it is not in their interest to take the charges away. We can afford to be more aggressive.”

The 30,000 people who have switched will collectively save nearly €4 million over the next year but why aren’t more making the same savings? Nolan has a theory.

“You are avoiding a loss rather than tangibly making a gain and that is not such a compelling prospect for most consumers even though the outcome is identical. You work hard at making the switch but then you don’t get anything back; you just don’t lose something.”

Irish people are not alone. Last month a survey from Which? Money in the UK highlighted similar levels of consumer inertia when it comes to switching bank accounts, with just 2 per cent of adults switching current accounts in the past 12 months.

Today a campaign is being launched there aimed at encouraging consumers to look around for better value banking. The Payments Council is behind it, and it is also pushing a new seven-day system of switching in response to government pressure to make the market more competitive.

Such a government-backed campaign would be welcome here too.

1 Bus Éireann to shut many inter-city routes due to financial pressures
2 Coronavirus cases rise in most counties but rate of increase is slowing
3 Hello Eir, is anybody there? Four unhappy customers complain
4 Donald Trump's taxes: US president paid $750 federal income tax the year he won the election
5 More than 30 people queue overnight to secure property in Carlow
Real news has value SUBSCRIBE

Bus Éireann to shut many inter-city routes due to financial pressures 16:00
Northern Ireland reports 220 new cases of Covid-19 14:54
Gardaí want to talk to three males over alleged rape in Mayo 13:58
Substantial increase in overseas travel last month 13:48
Coronavirus cases rise in most counties but rate of increase is slowing 13:39