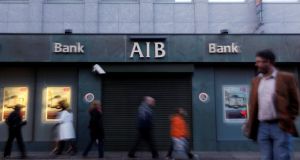 Tánaiste Éamon Gilmore has rejected opposition calls for the Government to intervene in AIB’s decision to raise mortgage interest rates.

“The announcement by AIB that it is increasing the standard variable mortgage rate and a similar announcement by EBS is of course bad news for mortgageholders, there is no doubt but…that is a commercial decision that is made by those two institutions,” he told the Dáil under questioning from Opposition.

There has been sharp criticism of AIB’s move which will see some 70,000 AIB mortgage-holders face an average extra annual bill of close to €300 after the bank raised its interest rates from the start of June.

Homeowner advocacy group New Beginning raised concern the move could damage the economy. “On the one hand they say they are committed to solving the mortgage crisis and then they go and do the very opposite. The Bank needs to realise the simple reality: By increasing the amount people who can’t pay must pay, they are just making the problem worse,” co-founder Ross Maguire said

Fianna Fáil finance spokesperson Michael McGrath said the move was “deeply depressing” for thousands “already struggling to pay their mortgages”. It would damage the economy and “push more borrowers into the spiral of mortgage arrears”.

It was “remarkable that the Government is unwilling to even express a view on the matter given the impact of rate increases on mortgage arrears and the wider economy” he said.

He described the growing difference between tracker and variable rates as “completely unsustainable” and something the Government “cannot continue to ignore”.

After his refusal “to say no to Richie Boucher’s huge pay, he must now step up and stop AIB and EBS increasing their variable interest rates,” Mr Dohertysaid.

“The ECB are generally considered to be moving towards lowering their interest rates yet in Ireland a state-owned bank is hiking-up its rates,” he added.

AIB yesterday said it did not expect to introduce further increases in its variable rates this year, but noted that this was based on current funding costs.

It said the latest hikes would bring its rates “in line” with other pricing in the market. AIB’s standard variable rate was the lowest in the market before this increase but, at 4.4 per cent,it will stand around the average.

It is thought the bank has roughly 70,000 customers holding standard variable rate loans, while several thousand more are due to be affected by the EBS and Haven increases.

AIB standard variable customers absorbed a total increase of one percentage point in their mortgage rates in 2012.

“The decision to raise variable rates is driven by the need to ensure the bank is lending at long-term sustainable pricing levels,” AIB said in a statement. It added that the bank’s variable rates had been at “unsustainable levels relative to the cost of funding” for a number of years, while EBS has not announced an increase in almost two years.

It also said that the group’s cost of funding was driven in part by deposit pricing, which has been “decoupled” from the ECB base rate. This ECB rate is expected by some to be cut next week, leading to savings for holders of tracker loans.

The move will not affect customers holding fixed or tracker rates but it will hit buy-to-let investors.

The AIB rate hike will kick in from June 5th, while the EBS and Haven increases will take effect on June 1st.