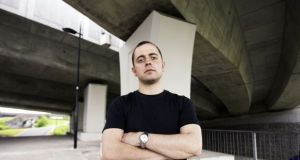 Sunil Sharpe, DJ and spokesman for the Give Us The Night campaign.

The Irish nightlife industry has accused the Government of “short-sighted ignorance” in failing to allow it resume some form of activity under the new Covid-19 plan.

While most pubs and restaurants in Ireland have been given the go ahead to resume trading on some limited basis, nightclubs, discos, casinos and music venues have been told they must remain shut indefinitely.

Under the Government’s five-level Living with Covid-19 plan, the sector has been told it will remain closed even under Level 1, the lowest of five alert categories.

“Even in the best scenario there is no door open for the night-time industry to return,” said Sunil Sharpe, a DJ and spokesman for the Give Us The Night campaign.

Mr Sharpe said there were about 450 nightclubs and other music-related venues in Ireland, employing thousands of people. Many of those remain without work, he said, and the issue of rent and closures is becoming ever more urgent.

“We aren’t talking about going back to the old way of doing things. We are talking about severely restricting venues, but even at that there is no provision [in the roadmap],” he said. “It’s particularly shortsighted and in my view it’s a very ignorant response to our industry.”

He said other countries have looked at solutions, including segregated audiences and table service. “I don’t see why that can’t be applied [here].”

However, he accepted “the idea of people coming together on a sweaty dance floor” is not an option. “That’s not living with Covid-19, we absolutely can’t do that.”

Neil Kelly, director of the Factory night club in Waterford, said half of all venues could shut permanently within the next 12 months without a State subsidy.

“Even if you are closed, there are still bills,” he said. “Eventually [the industry] is going to crack and it will collapse.”

Meanwhile, three of the largest drinks suppliers in Ireland have described the Government’s decision to keep Dublin’s wet pubs shut as “unfair and disproportionate”.

Heineken, Diageo and Molson Coors issued a joint appeal to allow Dublin pubs that do not serve food to reopen, as originally planned, on September 21st.

That move was delayed this week due to the rising rate of Covid-19 infections in the capital. Pubs in the rest of the country will be allowed to reopen next Monday.

“Dublin pubs must be given the same opportunity as the rest of the Irish and European hospitality sector to demonstrate that they too can open in a safe and responsible manner,” said Maarten Schuurman, managing director of Heineken Ireland. “[It] is hugely damaging for pubs, drinks suppliers and the wider economy of the city and country.”

Oliver Loomes, managing director of Diageo Ireland, said the “ongoing approach of discriminating against wet pubs is unfair and inconsistent with the public health approach in the rest of Europe”; while Ryan McFarland, regional business director at Molson Coors, said Government support was required “to avoid many of these treasured pubs disappearing forever”.

Man using electric scooter found dead on road in Harmanstown, Co Meath 09:12
Coronavirus: State at ‘tipping point’ in Covid-19 struggle, says expert medic 04:00
‘The top of my finger was gone’: Fireworks a clear and present danger in Halloween run-up 03:45
Eamon Ryan interview: ‘Climate action is where the jobs are going to come’ 02:30
Covid-19: Contact tracers to start looking into where people are infected 01:16