Do the clothes on our backs leave blood on our hands? 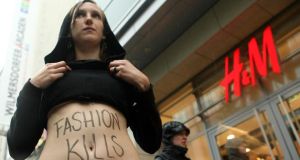 It is not hard to find cheap clothes but, last month, the death of more than 1000 workers in a Bangladesh factory collapse highlighted the true price of inexpensive clobber we buy.

Documents found in the rubble of the Rana Plaza building suggest that Zara, Mango, C&A, Benetton and Primark (Penney’s) were among the many companies that had, at some stage, placed orders with the factory. Costs had been cut by the factory owners to keep prices down for the clothes companies and the Western consumers who buy from them. Most of the workers earned barely €30 a month.

The collapse followed a fire at another Bangladeshi clothes factory last November, which claimed more than 100 lives.

The disaster has focused attention firmly on the sweatshop industry. Do the cheap clothes on our backs also mean we have blood on our hands?

Gareth Price-Jones, country director for Oxfam in Bangladesh, rejects the idea that we have to pay more for ethically produced clothes.

“Cost is one of the big arguments often given against ethical trading, but there’s no reason that treating workers well should necessarily cause price rises,” he says. “When you consider the massive profits – in the tens of billions, in some instances – that are made by many retailers, there is leeway for them to trim them down slightly.”

Of course, when asked, consumers almost invariably say they would be willing to pay that little bit more for an ethically produced product. But do we actually care about how our clothes are made?

Pricewatch conducted an unscientific Twitter poll, asking if people would shell out an extra 50 cents on a pair of five socks, if they knew they were ethically produced. Most said yes, but several pointed out that ethically produced clothes need to be clearly labelled as such – and with a recognised label – in order to force people to make a conscious choice.

Fortunately, there is more reliable data on this issue. In the US, researchers at he University of Michigan conducted an experiment in a Detroit shopping centre, placing identical socks side by side.

One set was labelled as coming from a factory with good working conditions and half of the customers bought them. When the price on the ethical socks rose by just 5 per cent, only about 33 per cent of consumers shelled out.

Amid an online chorus of boycott calls, Price-Jones points out that the garment industry has changed many lives for the better. “It is a huge business and it offers great potential to lift millions of people out of poverty,” he says. “If customers boycott, they are merely disengaging and condemning some of the world’s poorest people to a worse life.”

There are more effective steps that consumers can take. Advocates such as Oxfam and the Clean Clothes Campaign have often suggested that customers in clothes shops should seek out managers and ask about how workers are treated.

In an Irish context, at least, this seems like a slightly idealistic and unrealistic proposition: we are notoriously slow to complain if restaurants serve us slop with a slap in the face; it is unlikely that we would go so far as to interrogate shop staff.

Kate Nolan of the Clean Clothes Campaign says that it is surprisingly easy for customers to make a difference.

“Sign an online petition with Avaaz. Tweet the companies and ask them what they are doing. Follow Facebook campaigns. Email them. Look at the labels, ask in shops. Each voice can make a difference. If you see a more ethical option, and can afford a few extra cents, buy it – your purchase is a clear vote.”

Supply chains can be long and complicated, with retailers often claiming they are unaware of abuses by subcontractors, but consumer pressure can persuade them to implement changes: last year, the makers of Tommy Hilfiger and Calvin Klein signed a ground-breaking agreement to protect Bangladeshi garment workers from dangerous working conditions.

Among major clothing companies, M&S has a particularly good record, with its Plan A Programme widely praised for improving workers’ rights and conditions in the developing world; the retailer also offers a reasonably good value proposition for shoppers.

M&S has absorbed the cost of implementing these changes, but is still making large profits – in fact, the company has saved more than €100 million by becoming more sustainable.

Customers could also consider buying from online retailers, smaller boutiques and independent shops, where it may be easier to ask questions. Some companies make ethics a unique selling point.

In 2009, Dubliner Eva Power set up The Ethical Silk Company, which makes silk pillowcases and cot sheets. Initially, she focused on bringing an ecologically friendly product to market, but she quickly realised that she also wanted an ethically made product. Working with the Presentation Sisters, she found a small women’s federation in India with a tailoring unit.

In a rather unorthodox move, Power asked the women to set their own wages based on what was fair.

“The silk we use is expensive,” she explains. “If the wages were too low, I couldn’t expect them to care about their work. By paying that bit extra, I get a better product.”

Power has managed to keep prices low by only selling online and at trade fairs. “I get to meet my customers at the trade fair. The quality of the product is the main incentive for them to buy. They mainly see the ethics as a bonus,” she says.

Deirdre Hynds is a public relations specialist with Sound PR, which specialises in public relations for ethical, sustainable, and organic companies and projects. “Irish people, if given a choice to spend marginally more for a brand that they know is not exploiting people, will do so,” she says. “There are lots of opportunities for business to build relationships with consumers based on a currency of transparency and trust.”