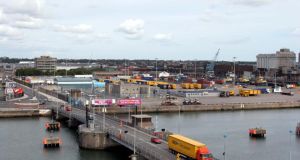 The East Link bridge. City engineer Michael Phillips will next week recommend that councillors choose to retain the €4.2 million in annual toll revenue.

private contract comes to an end.

Councillors will be asked to decide whether to end tolls on the bridge, in place since 1984, or keep the cash for the council when the contract ends next year.

City engineer Michael Phillips will next week recommend that councillors choose to retain the €4.2 million in annual toll revenue. The bridge, which was opened in 1984 by the then taoiseach Dr Garret FitzGerald, was Ireland’s first toll bridge under a public private partnership.

Last year the toll generated a net profit of €4.2 million, 58.34 per cent of which went to DIF, 25 per cent to the Dublin Port Company and 16.66 per cent to the council. Out of the council’s share it had to pay out €600,000 in rebates to hauliers who have no option but to use the bridge because of the ban on five-axle lorries on city streets.

Once the public-private partnership contract ends, the council would get to keep all the profits, Mr Phillips said.

“100 per cent of the profits from the toll facility would now accrue to DCC as the other two parties to the current arrangement, Dublin Port Company and DIF, would no longer have any involvement.”