Brown Thomas prepares for Christmas – with 127 days to go 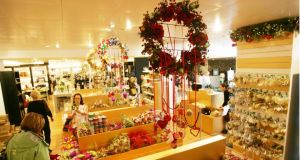 The Christmas shop in Brown Thomas in Dublin in 2011. Photograph: Bryan O’Brien.

It’s beginning to look a lot like Christmas – for customers of Brown Thomas.

Staff at the store were yesterday decking the halls of their outlets ahead of the launch of their annual Christmas market on Thursday – with a mere 127 shopping days to go. Outside, mid-August temperatures nudged towards 20 degrees.

A spokeswoman for the shop confirmed that it plans to transform areas of its stores in Dublin, Cork and Limerick into markets filled with trees, baubles and crackers from this Thursday onwards.

The themes for the markets include “I Love Candy”, “Santa’s Journey”, “Ice Palace” and “Venetian Winter”.

Brown Thomas says the decision to open the themed areas is in response to consumer demand. It has found that many people, apparently, like buying Christmas decorations at this time of year.

The store has previously reported that many of its decorations on display end up being sold out long before Hallowe’en.

If social media was anything to go by, word of an early Christmas met with a mixed reaction.

“Yes! As a dedicated Christmas-ophile I’m all for it,” tweeted one supporter.

Not everyone was as enthusiastic. “Ah stop, the thought of Christmas has given me the fear . . . for many reasons!” another tweeted.

Santa, at least, doesn’t need to worry about getting to work early. Its grotto will not open until later in the year.