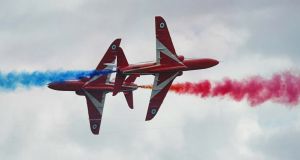 Close shave: The Red Arrows display team during a performance at the Salthill Air Show in Galway. Photograph: Joe O’Shaughnessy

Famed aeronautical acrobats The Red Arrows have been confirmed as the centrepiece to this summer’s Bray Air Display.

The Royal Air Force pilot team have made their names with close formation precision flying techniques and are held to be among the best in the world.

Comprising more than 120 people, the team includes pilots, engineers and support staff and have flown thousands of times in 56 countries since their formation in 1965.

The popular air display in Co Wicklow is due to take place on July 23rd and 24th, with the Red Arrows performing on the second day. Other acts have yet to be announced by organisers.

“We hope the large audiences, which I know number in their tens of thousands, will enjoy watching the team’s 2016 show. It’s always a huge honour for The Red Arrows to visit a new location,” said squadron leader Mike Ling.

They will join a packed schedule of aerobatic display outfits from across Ireland, the United Kingdom and Europe led by the Irish Air Corp.

The Bray Air Display attracts up to 90,000 spectators to the seaside town each year.