Berlin’s sharing economy: a glimpse of the future?

Public fridges with free food, community-supported agriculture, borrowing shops and knowledge-sharing: the German capital is at the forefront of a whole new system of trade 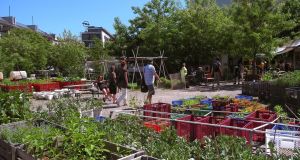 Prinzessinnengarten in Berlin, a community garden run by a committee of 10 or 12 people who offer workshops on growing and spaces for tool and bike repair. Photograph: Ullstein Bild/Getty Images

The chrome and neon of the chain stores and multiples make it a generic European high street, a typical shrine to consumerism. The freezing weather and the U-Bahn station in the middle of the road make it Berlin.

My Airbnb host, Marko, directs me to the stop that will take me to Prenzlauer Berg, an elegant and leafy district in the east, where many locals are forgoing capitalism and embracing the “sharing economy”.

The term is attributed to Harvard economics professor Martin Weitzman, who wrote The Share Economy in 1985 as a response to unemployment and stagflation. It seems that now, following a global recession, the ideas are gaining currency, with a strong culture of collaboration and peer-to-peer sharing in Berlin.

My guide for the afternoon is Maike Majewski, a translator and English teacher. Her freelance work allows her to dedicate her time to many sharing projects. “I would say sharing and sustainability is a lifestyle,” she says as we head towards our first stop: a public fridge.

Food sharing is something Majewski strongly believes in, and she gives up five to six hours a week to work on collection and distribution. The public fridges are linked through a website (foodsharing.de), and there is a network of volunteers on hand for maintenance.

And there, in the middle of the street, is a clean, open fridge, a bit like a vending machine with free food inside.

Majewski does about four pick-ups a week, “which means, by now, I’ve rescued 800kg of food this week”. The food comes from organic shops and supermarkets. What started out a few years ago as far less palatable dumpster-diving is now a streamlined system for limiting food waste. The idea is not altruistic, or even necessarily environmental.

The fridges are governed by rules and a system of trust: you swap food you have too much of for something you need. It’s a bit like asking your neighbours for two carrots to finish off your casserole.

Majewski also runs a Berlin co-operative where neighbours buy in bulk directly from an organic market, and she has a share in an organic farm. Community- supported agriculture is a relatively new idea, where you can pay a farmer up front, for a weekly share in the yield. There are 80 people in her agriculture scheme, who work directly with a farmer outside Berlin.

“You agree a deal with a farmer upfront so that he has a steady income every month, and for that you get a share of whatever he’s harvested.” She saves €20-€30 per week on her food bill (about €1,500 per year).

“To me, Airbnb is not really part of a share economy but rather a platform for people to rent out their spare room or, even worse, for investors to make a lot of money by renting out their apartment as holiday homes.” She recommends instead couch surfing or bewelcome.org, which guarantees you’re cutting out landlords and business owners.

Majewski was one of the founders of the Leila three years ago. It’s effectively a library of things, and is to be found on a side street, away from the designer cafes and boutiques of Prenzlauer Berg. It’s crammed from wall to ceiling with tools, clothes and kitchenware.

A statistician has worked out that the average household drill gets used for about 12 minutes in its lifetime. The borrowing shop liberates the device from its uselessness. There are now tool libraries in New York and Canada, and a library of things is about to open in London.

Majewski has recently moved away from the Leila, and is now interested in knowledge sharing and the open-source circular economy. These are two concepts in their infancy that have been welded together but could be the most sustainable economic model for the future.

Sam Muirhead, from New Zealand, is one of the founders of Open Source Circular Economy. He previously worked in video production but is now full time with Open Source.

This concept is about taking sharing to a whole new level; it’s about data and knowledge sharing, but specifically applied to a circular model for the economy. A circular economy is one where manufacturing by-products and all elements of products at the end of life are reappropriated into the system to start off other cycles. An example of this is Renault recalling old cars and making dashboards for new models.

Muirhead says for it to work, the entire process needs to be opened up. “Open source is more than just transparency. It’s a collaboration method where basically you can say anyone can put their ideas in to create a solution, but can also benefit.”

Open source differs from crowd sourcing, where a company looks for a solution outside of itself but then solely benefits from that solution. It comes from the world of coding, specifically the Linux Kernal. This is an essential component in all computers and smartphones and an example of competitors working together in an effort to benefit all.

The big players, such as Google, Samsung, IBM and Intel put in billions, and hackers, activists and coders contributed to aspects of the system. It is run by a not-for-profit foundation.

Ultimately this is moving away from individual ownership and into access for all. The concept is gaining a foothold outside coding and moving into manufacturing, with the rise of fab labs all over the world, including the University of Limerick.

These initiatives could ultimately remove hierarchies and put production back in the hands of the individual. The democratisation of the internet and open knowledge are a modern way of opening up traditional cottage industries.