All over the shop: an A to Z of supermarkets

Grab your trolley and let’s take a whistle-stop tour of the aisles, from the growth of Aldi to, well, Z 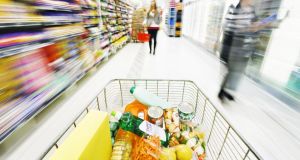 Value It is what all stores promise us. Whether they deliver depends on how loyal (or gullible) you are. Photograph: Thinkstock

Aldi
When it entered the Irish market a decade ago it was considered an oddball outsider with unfamiliar brands and a random assortment of jackhammers and blow torches. Times have changed and the German discounter is now the fastest-growing supermarket in Ireland and has the highest loyalty rates among Irish shoppers. A recent survey found 43 per cent of its customers said there was “nowhere else they would prefer to shop” for food and grocery items.

Booze
When it comes to the demon drink, we have never had it so cheap. Before the euro changeover in 2002, a can of Budweiser in an off-licence cost about £1.55 (€1.97). Today seven cans cost just €10 – or €1.42 each. When alcopops were launched a decade ago they sold for about €3 each. Today they cost less than €1.50. Just five retailers – Tesco, Dunnes Stores, Centra, Spar and Costcutter – control 95 per cent of all carry-out trade. Tesco accounts for more than 50 per cent of it.

Cross-Border
In 2009 hundreds of thousands of us routinely crossed the Border in search of better value, ignoring our politicians, who exhorted us to do our civic duty and turn our backs on the bargains. Today, however, with sterling weaker, and prices in the Republic becoming more competitive, fewer make the trip.

Dine in for two
Marks & Spencer isn’t cheap but it can sometimes offer amazing value for money. Years on from its introduction, we still love its dine-in-for-two offers. Typically these include a main course, a side, a dessert and a bottle of wine for €13.50. It used to be €12.50, but we have to pay more now because the Government added €1 on to the price of a bottle of wine in the last budget. Thanks for that, Michael.

Every little helps
Tesco has its critics – hardly surprising, given it is the biggest retailer in the State, with a market share of more than 27 per cent. Despite the flak it gets, it is very important to the economy and employs more than 15,000 people. It accounts for more than 20 per cent of all the Irish produce that is sold in the UK and is worth €2 billion to the local economy each year.

Feargal Quinn
Quinn (right) founded the company that still carries his name – although not for long – in Dundalk in 1960. It grew into a 24-store chain where the customer really was king. The quality of the produce was generally top-notch – including the famous expensive sausage, initially made in-store but now outsourced to Larry Goodman’s ABP – and the man himself led from the front and was often seen on the shop floor. Then, in 2005, he sold his shop to Select Retail Holdings for €450 million. It must rank as one of the most canny business decisions every taken by an Irish person.

Groceries Order
The abolition of the Groceries Order in 2006 was hailed as a coup for the consumer that would result in lower prices. We were told we would save up to €500 a year as a result. We didn’t. In fact food prices got higher despite the scrapping of the 50-year-old price controls on basic foods.

Horse meat
It started with Tesco and Aldi own-brand frozen beef burgers, and the horse-meat crisis quickly spread to all supermarkets earlier this year after many well-known brands were also shown to be producing products made with at least some horse meat.

Irish
As shoppers we are more inclined to wrap ourselves in the tricolour now than at any time since the 1970s. Research carried out three years ago found 25 per cent of Irish consumers made their choices on the basis of where food was produced. According to official figures that number is now close to 40 per cent.

Jobs
Some 290 people will lose their jobs in Marks & Spencer and Superquinn following “market consolidation” announced last week. It is a lot but it pales in comparison to the more than 50,000 people who are currently employed by the State’s big retailers.

Kantar
Who are these people and should we care about them? Kantar World Panel is the retail expert that details how each of the big players is performing every quarter, and it is the organisation best placed to highlight grocery price inflation, which is frequently higher that regular inflation.

Loyalty cards
Your supermarket knows what you buy and when you buy it. It knows how old you are, your marital status and how many kids you have. It knows where you live, what credit cards you use and what DVDs you watch. It knows intimate details of your personal care. But it gives you vouchers every quarter, so that’s okay.

Maurice Pratt
The man who became the face of Quinnsworth. Then he became the slightly-less-visible face of Bulmers.

NCA
The National Consumer Agency is either a toothless quango that does nothing to help beleaguered Irish consumers or it is a powerful advocate that acts as a supermarket watchdog and stops misleading pricing and dodgy practices. It is probably a little bit of both. We used to like its grocery price surveys but it stopped doing them more than three years ago, after retailers with deep pockets and accomplished legal teams complained the methodology was flawed.

Own-brand
Five years ago just 8 per cent of the Irish shopping basket was made up of own-brand products. Today it is close to 40 per cent, as consumers recognise the value to be found by deserting familiar labels. By doing so you can save more than 30 per cent on a weekly shop. That is more than €3,000 for the average household.

Price-matching
A survey by the Consumer Association of Ireland published earlier this year found indications of widespread price-matching across the State’s main supermarkets – Dunnes Stores, Superquinn, Supervalu and Tesco. It found a price difference of just €0.55 between the cost of a basket of 19 commonly bought good in the cheapest supermarket and the dearest. The price of the basket of goods in Tesco and Dunnes Stores was identical.

Quinnsworth
The shop was taken over by Tesco in the late 1990s, but is still remembered, mostly for Maurice Pratt and its “yellow pack” range of own-brand groceries. Yellow-pack soon become a pejorative description.

Ready meals
We are buying fewer of them. An NCA survey published last week found 73 per cent of us are preparing more food from scratch than 18 months ago, while 54 per cent are eating less processed and ready-to-eat products. This shift is particularly evident in younger age groups, with 82 per cent of those under 35 saying they are cooking more now.

Shrinking
Over the past 12 months, hundreds of things commonly found on supermarket shelves and in trolleys have been quietly made smaller by manufacturers anxious to keep profit margins up. Earlier this year, British consumer magazine Which? reported that one-litre tubs of Carte D’Or ice cream had become 900ml tubs, while Magnum ice creams were 330ml instead of 360ml. A packet of 48 Persil washing tablets is now just 40, while 56 Pampers Baby Wipes used to be 63. One Birds Eye range of burgers has been cut from 16 to 12.

Tea
Few products engender more loyalty among Irish shoppers than tea. Most of us are either in the Barry’s or the Lyons camp. Pity poor Tesco, then, when it tried to introduce us to the likes of Tetley and Twinings. It launched a campaign in 2009 that saw it give over more shelf space to these alien teas. But proper order was soon restored.

Unexpected item . . .
. . . in the bagging area. It is not unexpected. I put it there. Is there anything more annoying than express checkouts?

Value
It is what all stores promise us. Whether they deliver depends on how loyal (or gullible) you are.

Walmart
The biggest grocery chain in the world and the parent company of Asda, the British retail chain that consistently undercuts the likes of Tesco. Were Asda to enter the Irish market it would lead to the biggest price shake-up ever. The chances of it happening seem remote, however.

Xmas
It starts earlier every year doesn’t it? Well, not really. While the likes of Tesco do start stocking some Christmas products as early as September, the madness doesn’t really being until Halloween has ended.

Yo-yo pricing
They go up. They go down. They go all over the shop, leaving consumers utterly bamboozled.

Z?
No, we can’t think of any grocery related word that starts with Z and we’re not even going to try.