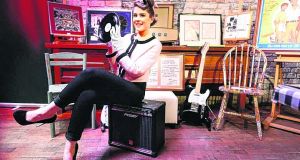 Inez Flynn from Whyte's Auctioneers with an origional recording of a young and unknown Elvis Presley from July 5th, 1954. Photograph: Alan Betson / The Irish Times

A pop and rock memorabilia auction in Dublin at the weekend includes rare acetate and vinyl records, autographs, photographs and other items from artists including Elvis Presley, the Beatles, Buddy Holly, U2 and Rory Gallagher.

Organised by Whyte’s Auctioneers, the 200 lots – due to go under the hammer at the RDS on Sunday – span 60 years of international and Irish pop and rock ’n’ roll. Almost all the items were sourced in Ireland.

An original copy of the first press mention of U2 in the Evening Press in March 1978, when the band was known as U2 Malahide, is estimated at €500-€700. All the names of the band members are misspelled in the photo caption apart from Adam Clayton.

A chair designed by Stephen Colgan for Imelda May, signed by the singer, is being offered on behalf of the Parkinson’s disease charity in |Ireland. Other customised chairs signed by Nick Seymour, Michael Flatley and Daniel O’Donnell are being sold for the charity.

Ian Whyte of Whytes ’s Auctioneers said the collection had something for all music lovers.

“The items start at €100-€150 and then go up to the highest at over €50,000, but there’s something for every budget. It’s nice for fans to have a memento of their favourite music act, but there’s plenty of items for the serious collectors.”


Overseas bidders
Mr Whyte said he was expecting a lot of the higher ticket items to go overseas, with huge interest in the collection from America and Australia from where potential buyers will be able to bid online.

Mr Whyte said if an item was of good quality, it was more likely to hold its value, even in a recession. “Some will always buy for sentimental value but others buy to invest. They will pick items that they think will always be in demand, especially from the big names like the Rolling Stones or the Beatles.”

“We also have a customised Mathey-Tissot watch. Elvis had a few of these made and gave them to friends and family. If you owned one of these exclusive watches you were automatically a member of the ‘Memphis Mafia ’, and you could get into VIP rooms at Elvis concerts and tours just by flashing it. It’s expected to go for between €8,000-€10,000.”


Beatles on the menu
An Aer Lingus menu signed by the Beatles during their flight back to London after their only appearance in Dublin – at the Adelphi Cinema – is expected to sell for up to €500. Mr Whyte said: This November marks the 50th anniversary of that concert so this rare set of autographs is very fitting. A crew member working on the route got the band to autograph the back of the menu and, funnily enough, one of the autographs is fake: John Lennon wrote in Paul McCartney’s name as well as his own as Paul wouldn’t sign it.”

The auction includes other Beatles items including a 1965 American cinema promotional poster for Help! , autographs, posters, tickets, and concert programmes.


Items are on show at the RDS from today until Sunday ; the auction tak es place from 2pm Sunday. See whytes.com.