British judge jails Romanian criminals, warning that Britain will not be ‘a soft touch’

Gang will face 83 years in jail 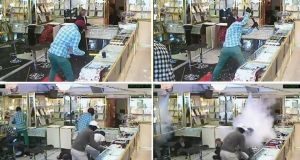 An undated handout photo issued by the Metropolitan Police of CCTV footage of a Romanian gang robbing a jewellers in Turnpike Lane, London.

Romanian men, who had never “worked a day” since arriving in Britain, have been jailed for more than 80 years in all for a series of violent jewellery robberies, with a judge warning that Britain will not be “a soft touch”.

The men carried out seven raids over six months using sledgehammers, crowbars and baseball bats to break into jewellery shops, terrifying their Asian and Turkish owners, who traditionally stock large amounts of gold to satisfy demand in their communities.

Sentencing the men, who had pleaded guilty, Judge Timothy Pontius said: “No one should think for a moment the courts of the UK will be a soft touch. Sentences such as these should serve as a powerful deterrent not only to home-grown but imported criminals.”

None of the men had prior convictions in the UK, while Judge Pontius said that none of the group, led by Ovidiu Gabor (25), had established any right to remain in Britain after they complete their sentences and will be deported afterwards.

Delivering his sentences in the Old Bailey, the judge said that lengthy terms in jail were justified because of the level of planning and violence used and the number of conspirators who were involved over many months.

Iulian Roman (21) was jailed for nine years and six months, including seven years to run concurrently for a £1 million raid on a shop in Birmingham last year.

5:21 Mary Lou - 'Nothing will change if Fine Gael and Fianna Fáil are in government together'