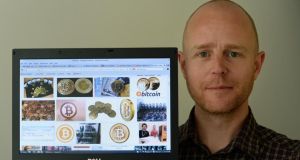 In 2008 a pseudonymous character called “Satoshi Nakamoto” invented a cyber-currency called bitcoin. Initially ignored by all but a few aficionados, it became the subject of huge interest earlier this year when a wave of speculation caused the price to soar . . . and then plummet.

“A bitcoin today is worth around €75,” explains Alan Donohoe of the Irish Bitcoin Association. “Well three months ago bitcoin was up to €140 and dropped in a matter of hours to €80.”

The hype obscured the fascinating rise of an untraceable peer-to-peer electronic currency that crossed borders, eschewed regulation and was also used for nefarious purposes on the notorious Silk Road website (where guns, drugs and other illegal items are for sale).

Anarchist types
The mystery around “Nakamoto’s” identity lent itself to the utopian narrative which many have structured around the currency. Brian Lucey, professor of finance at Trinity College Dublin, notes that bitcoin enthusiasts are often “crypto gold-standard people” who object to central bank control over money. Internationally interest seems driven by distrust of government and banking institutions. Anarchist types see it as an alternative to government-controlled currencies, while libertarian investors see it as a way to make a lot of money fast. In the US and UK both mingle at bitcoin meet-ups.

David Fleming, owner of Eircoin, “Ireland’s only bitcoin broker”, says such meet-ups haven’t taken off here yet, but he describes bitcoin as “one of the best forms of money that has ever existed. It solves one of the biggest problems we have, which is the expansion of credit at the will of whoever’s in control of the money supply . . . It’s better than gold, it can be transported easily and stored more securely and it doesn’t have the same cost to the environment”. But he’s reluctant to get too political, saying he sees it “purely as a useful technology.”

Mathias Linnemann has a more explicitly political interest in the currency. He works for a large technology company in Dublin and also advises companies how to incorporate bitcoin into their business models. “Personally I’m not for crashing governments or destroying the system,” he says, but he muses about how bitcoin might eventually become the unofficial currency of the international black market. That said, he thinks the stereotype of bitcoin being for those who want to avoid tax or buy drugs is overplayed. He sees it as the people’s currency.

‘Huge potential’
“We live in a part of the world where it’s not really a problem that the government can follow what you do, but a lot of people are in places where it’s a big problem. And that’s where bitcoin gets really interesting.” He references Iran, Myanmar and North Korea. He recently visited Argentina where he made a short film about a man using bitcoin to avoid the perils of the inflating peso – the film can be viewed at bitcoinfilm.org. “I think a currency like this would have a huge potential to free a lot of people,” he says.

One of the things stopping people from using bitcoin efficiently, however, is its own price volatility. “For any currency to work,” says Lucey, “you would hope it would have the same purchasing power in a month’s time as today.” That’s not clear with bitcoin, he says, because it’s still being created (production of bitcoins will stop in 2140) and people are speculating wildly about its worth. “There’s a bit of mania about it,” he says. “I’ll take it more seriously when my salary comes in bitcoin or I can use my ATM card for bitcoin transactions.”

Efficient mechanism
Alan Donohoe believes such things could happen. His own telecommunications company AllCom accepts payment in bitcoin, although he estimates that only 0.5 per cent of customers use that option “and for some reason many of those have been from Switzerland.”

He established the Irish Bitcoin Association with some “silent partners” to encourage Irish businesses to use the currency.

Donohoe’s interests are much less political than Linnemann’s. He sees bitcoin as an efficient mechanism of exchange and a way of avoiding online middlemen like Paypal. David Fleming sees the mysterious Satoshi Nakamoto in altruistic terms (“I think he did it to aid society”), but Donohue envisions something more prosaic. “If I was to guess I’d say [Satoshi Nakamoto] is a group of businessmen, maybe in Silicon Valley, who have invested a lot of money to get it started.”

Donohoe admits that the speculation-fuelled volatility hasn’t helped the currency’s uptake as a business tool, but notes that in the US more companies are using it and that there’s some interest here. “Mainly from students,” he says. “Younger folk interested in technology and something new.”

Utopian notions
Brian Lucey says people need to be cautious about investment bubbles and utopian notions, not to mention internet security. “It’s a cyber currency so it’s only as safe as where you’re storing and creating it. I have seen reports of people who have had their bitcoins stolen.” Bitcoin, he stresses, is very new.

But Fleming, Donohoe and Linnemann are optimists. Linnemann is going to Berlin in a few months to make another film, this time about small companies using bitcoin. “Over there they have pizzerias and bars that take it,” he says. But he’s not so interested in bitcoin as a business opportunity. “I’m not a bitcoin millionaire. I never bought a whole lot of bitcoins. Too risky,” he says. He sees it as a social experiment.

“This is a whole new worldwide global technology that can be used without anyone’s consent and disrespects borders. It asks – ‘What is value? Who decides what money is worth?’ It’s a real experiment running in the real world.”

1 Six weeks of Level 5: Non-essential shops to close, no visitors to homes and a 5km travel limit
2 Life under Level 5: What will the next six weeks look like for Ireland?
3 Covid-19: State moves to Level 5 for six weeks with hopes of ‘meaningful’ Christmas celebrations
4 Bill that overrides UK’s Brexit deal denounced in House of Lords
5 Coronavirus: Why Level 3 failed and why Level 5 might too
Real news has value SUBSCRIBE