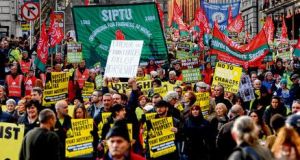 Tens of thousands attended the Dublin anti-austerity march organised by the Irish Congress of Trade Unions on Saturday. Addressing the rally in Dublin, Ictu's David Begg said the campaign would go on until the agreement reached in June last year by European leaders to separate bank debt from sovereign debt was honoured in full. photograph: dara mac dónaill

The campaign against repaying Ireland’s bank debt would continue despite last week’s promissory note deal, the general secretary of the Irish Congress of Trade Unions, David Begg, has said.

Addressing a rally in Dublin on Saturday organised by congress in support of lifting the overall bank debt burden, he said he wanted to send a message to the “architects of austerity” that“we no longer want to be the poster child”.

The campaign would go on until the agreement reached on June 29th last year by European leaders to separate bank debt from sovereign debt was honoured in full, he said.

Speaking in a radio interview yesterday, however, he said Ictu would not be joining any campaigns to protest against the introduction of a property tax. Mr Begg hit out at what he termed “Trotskyist groups” and said congress would not be campaigning with them to oppose the property tax.

The tax “is something which was enacted by the parliament. That’s a democratic decision. Our business is not to interfere with that”.

Congress broadly agreed with the concept of a property tax “albeit we would have different views about the nature of that property tax”.

Ictu estimated that about 60,000 took to the streets of Dublin on Saturday as part of its march and rally in support of lifting the debt burden. The event was attended by trade unions, community and voluntary groups and some left-wing political organisations and campaigns. Gardaí, however, put the turnout in Dublin at about 25,000.

Mr Begg estimated that more than 100,000 people turned out at the six congress-organised rallies around the State.

Some left-wing groups who positioned themselves at the front of the Dublin march and who were strongly critical of the trade union leadership were prevented from entering Merrion Square where the rally was to be held.

Entry to the sides of the square was not opened up until these groups had passed and the main body of the march had reached the entrance.

In his address to the rally Mr Begg said Ireland had saved the European banking system and now the country wanted that solidarity returned.

He said pushing the debt onto future generations would simply not do.

“What happened this week was not the end of it; it was not even the beginning of the end. It may turn out to be the end of the beginning, but only if we make it so . . . New deal, same problem: 1.8 million people cannot possibly pay off a bank debt burden of €64 billion – especially a debt they played no part in running up.”

Mr Begg said Ireland had already paid €41 billion for the banking crisis, more than Germany, the UK, Spain or Portugal.

On the march: what protesters said

“I’m here protesting to lift the burden, the debts and the property tax. I already paid €75,000 in stamp duty four years ago, that I borrowed and am still paying on an overpriced property, so I won’t be paying the property tax.”

“I’m a second-year student in NUI Maynooth studying youth and community studies. I’ve worked in the community for the past 16 years in disadvantaged and marginalised areas. We’re sick of austerity. We need solidarity and to all stand together against it. I refuse to pay these new taxes: I’d rather do time. I’ll go to prison.”

“I’m here today because my wife is a teacher and my brother is unemployed. I’m employed but with all the cuts and stealth taxes, it’s tough . . . There’s a lot of wastage within the Civil Service but the young people starting out are getting hit. The price of living hasn’t decreased but they’re taking more money out of people’s pockets. ”

“I came to Dublin today because there’s so much suffering going on. I don’t know where I’ll be in five years’ time. I’m fed up with the way the country is and the Government at the moment. I’m not sure who I’d vote for in the morning, not any of the current ones anyway . . . Independents or a party where there’s more young people.”

“I’m really angry at all that is happening. We see the effect it is having in disadvantaged communities and for young people in particular. It’s about time that we all got out together and made a stand against it.”

“I’m marching against austerity measures but I’m mainly here because of my daughter. She’s only four years old but she’ll be paying off all these debts when she’s my age. This is the first time I’ve ever gone on a protest like this. I’m just so angry about it all. Most of this debt isn’t even ours and doesn’t belong to the Irish people.”

Ictu rallies across the State

EU governments should honour an agreement made last June to allow the European Stability Mechanism (ESM) fund to recapitalise banks rather than have the Irish people shoulder the burden, protesters in Cork heard.

Siptu general secretary Joe O’Flynn told the rally that trade unionists were seeking nothing more than “fair play and honourable behaviour” in relation to the bank crisis rather than a programme of austerity which clearly was not working.

Addressing the rally in the Grand Parade, estimated by organisers to be 15,000 and by gardaí to be 6,000, O’Flynn said that unlike some commentators, he was not impressed with the agreement reached in Frankfurt this week as it placed an unfair burden on Ireland.

He said the financial crisis which hit in 2008 had been caused by “a failure in corporate governance and wanton greed” with every policy response being dictated by the need to protect the banking system and the very people whose greed caused the crisis.

From bricklayers to teachers, they came in their thousands from all over the midwest to Limerick city, to highlight their opposition to the austerity measures.

Led by a crescendo of noise from the bagpipes and drums of the City of Limerick Pipe Band, the 8,000-strong protest march brought the city centre to a standstill.

Trade unions and individuals from Limerick, Clare, Tipperary and Kerry hit the streets carrying anti-austerity placards and banners. Protesters shouted chants such as “The banks got bailed out . . . We got sold out” and “Tax the greedy . . . not the needy”.

John Moore (47), from Co Limerick, marched alongside his wife – both carried banners which read: “I’ve paid €9,000 of your bank debt”.

Cian Prenderville said the Government deserved no credit for its successful refinancing of payments to bondholders of the former Anglo Irish Bank.

An estimated 6,500 people took part in the Sligo anti-austerity march, described by congress spokesman Richie Carruthers as “a people’s march”.

He told protesters that public service workers, the unemployed, senior citizens and community and voluntary workers must stick together in the fight against poverty, emigration and inequality.

The union leaders said the numbers turning out were a reflection of the “real anger and worrying concern” among ordinary people.

O’Connell Street, Sligo’s main street, was closed for several hours to accommodate the rally which was also addressed by a local unemployed woman, a member of the Senior Citizens’ Parliament and a special needs assistant .

Dáil deputies from the west of Ireland have been warned that they will lose their jobs at the next election unless they deliver in the next few years.

Padraig Mulligan of Impact, addressing a crowd of about 2,000 in Galway, said: “I want to address every single politician in the west of Ireland and tell them: you have borrowed our vote between now and the next election and if you fail us we will replace you.

“The west is awake and prepared to hold all our politicians to account.”

Speakers at the rally in Waterford included Ictu’s Jimmy Kelly and Claire McMahon from the Irish Nurses and Midwives Organisation.

Union co-ordinator David Lane said the crowd numbers, with estimates of up to 13,000, were boosted by the promissory note deal.

“I think over the last couple of days,” he said after the rally, “what happened is that people came to realise that the deal was no deal . . . because all it was was an extension of the debt. It’s not a writedown and still has to be paid, and why should we be paying it?”