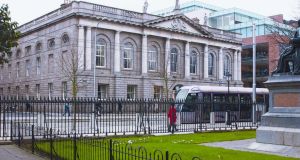 
The Bahraini government has expressed satisfaction with the outcome of meetings held at the weekend with a delegation from the Royal College of Surgeons in Ireland (RCSI) after the controversial cancellation of a conference on medical ethics.

A delegation from the college travelled to Bahrain to meet officials to deal with the fallout of Prof Tom Collins’s resignation last month as president of the RCSI’s Bahrain campus.

He told staff and students last month he was stepping down in protest over the cancellation of the conference on medical ethics which he helped organise.

Medical charity Médecins Sans Frontières, which had intended to co-host the conference with the RCSI, said permission for the conference had been verbally withdrawn by the Bahrain government. However, the Gulf monarchy has denied these claims.

“For their part, the delegation expressed regret over the circumstances that surrounded the resignation of former president of RCSI-Bahrain, affirming that the college looks forward to further expanding co-operation with the government in order to develop medical education in Bahrain,” the Bahrain News Agency report stated.


‘Government support’
Meanwhile, the prime minister “affirmed the government’s support for RCSI and the Bahraini-Irish relations, expressing appreciation for the college’s effort in training and feeding the health sector with well-qualified Bahraini medical cadres.

“He also asserted Bahrain’s keen interest to consolidate fields of co-operation with RCSI and benefit from its international reputation and achievements.”

A separate report from the same agency said: “The RCSI’s delegation expressed their appreciation towards the Kingdom of Bahrain’s support to the RCSI to upgrade its academic programs and research studies, praising the Ministry of Education and the Higher Education Council for developing its programmes in order to raise the standard of medical education in the region.”

The RCSI, whose investment in Bahrain amounts to €70 million, declined to comment on either the visit or the agency reports yesterday.

The delegation was led by the RCSI’s president, Prof Patrick Broe, and its chief executive, Prof Cathal Kelly.

The theme of the RCSI conference, scheduled for April 10th, was sensitive in Bahrain given the continuing fallout from the rounding up of scores of medics in early 2011 as Bahraini security forces tried to snuff out pro-democracy rallies. A number of those arrested had trained at the RCSI in Dublin.

The RCSI was criticised for its failure to take a public stand against the security crackdown which, as an international investigative commission later confirmed, involved serious human rights abuses by the Bahraini authorities.