An Irishman’s Diary: A homage to Myles na gCopaleen 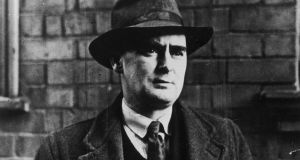 An elderly man who gave his name as Myles na gCopaleen was brought before Dublin District Court charged with causing a disturbance on Fleet Street.

His honour Judge Twinfeet remarked that the man in the dock was no stranger to him. The defendant was heard to mutter aithníonn ciaróg ciaróg eile.

His honour warned the defendant that this was no place for Latin tags or Norman quiddities. That sort of thing was all very well for the Fancy Dans beyond in the Four Courts, but this was the Bridewell, and the only person wearing a wig here, as far as he could tell, was the defendant himself. He advised him to stick to the English or be held in contempt.

One wig knows another, replied the defendant. He would rather be held in contempt than that cell they had him in. There was hoppers in there the size of a gerbil. It was all very well for the lower sort of Irishman, but he would have the court know he was an English baronet.

Sgt Pluck, prosecuting, stated that on Wednesday, April 1st he had found the defendant stripped to the waist and roaring in the middle of Fleet Street.

There was a strong smell of drink off him. When he tried to calm the defendant, he took a swing at him but fortunately missed.

Quis custodiet, ipsos custodes, said the defendant. The incident would not be repeated: if he ever got another dig at that red-faced turnip-snagger Pluck he’d make sure and do proper damage.

Sgt Pluck said that after a brief scuffle he had subdued the defendant, who then resisted being put in the car that took him to Pearse Street, claiming to have parliamentary privilege.

His honour Judge Twinfeet admonished the sergeant for what he termed a regrettable lapse in his diction. Parliamentary privilege was an abstract class of a thing not admitting of possession. One might not have it. It could only be enjoyed.

‘Winking of an eye’

In evidence, he said that that day had begun like any other for him when he awoke in the restaurant car of a train parked in the Phoenix Park tunnel adjacent to King’s Bridge station. There was, however, something different about the quality of the light at the end of the tunnel that day, April Fool’s Day.

“It was as if the daylight had changed with unnatural suddenness, as if the temperature had altered greatly in an instant or as if the air had become twice as rare or twice as dense as it had been in the winking of an eye.”

Things went from bad to worse. There was not a sinner from the Irish Press in Mulligans of Poolbeg Street. When he went round to Burgh Quay, the Scotch House was not merely closed, but absent entirely.

The Irish Times had likewise vanished from its customary location. The buses on the street had mysteriously changed colour, and the Plain People of Ireland had learned to walk upright, and bristled with an unwonted quantity of relatively straight and unstained teeth.

The defendant implored the court to imagine his horror when he looked into the Palace only to find it hosting what appeared to be a mass-meeting of the Irish Writers, Actors, Artists and Musicians Association – the dreaded WAAMA.

The back room was stuffed with writers and actors and similar self-regarding liúdramáns, all blathering out of them about some besotted scribbler who had mercifully snuffed it nearly 50 years before. The main bar was crowded with hangers-on and riffraff and there were painted women in the snug.

Outraged at this halfwitted invasion of his habitual sanctuary, the defendant had asked them all outside to sort it out like men. He had already stripped for the combat before he discovered that none of the curs had followed him outside.

His honour Judge Twinfeet ordered the dismissal of all charges against the defendant. He could leave the court without a stain on his character, which remained pseudonymous if not fictitious.

As part of the annual Myles Day celebrations there will be readings and songs in his beloved Palace Bar, Fleet Street, Dublin, 3pm-7pm today. No charge, all welcome.