Abortion legislation ‘incompatible with the core values of human rights’

Prof William Binchy says Bill not necessary under the decision of the European Court of Human Rights in A, B, C cases 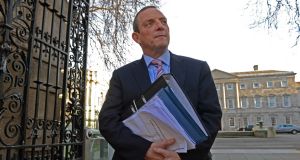 Abortion legislation is incompatible with the core values of human rights, Prof William Binchy, legal adviser to the anti-abortion campaign, has told the Oireachtas committee.

He said those values respected and protected the equal dignity and worth of every human being.

Prof Binchy said the Bill was not necessary under the decision of the European Court of Human Rights in the A, B and C cases. That only required clarity in law and a review procedure, he added.

Former Supreme Court judge Catherine McGuinness believed many Irish people would approve the Government’s action in bringing forward legislation to deal with abortion, despite the virulent argument on both sides.

Ms Justice Catherine McGuinness, who described herself as expressing the middle ground in the debate said: “despite the emphatic, not to say virulent, nature of some of the argumentation on both sides I remain convinced that very many Irish people will approve the action of the Government in finally bringing forward legislation in accordance with the Constitution in this difficult area.”

Dr Maria Cahill, of the UCC law faculty, said the Constitution was uncompromising in its defence of human life. This was evidenced by the fact that the Constitution prohibited the direct and intentional taking of not only innocent life, but also even of guilty life by forbidding the introduction of the death penalty in the strongest terms.

It would be very difficult, she added, not to conclude that the suicide provision was simply unconstitutional.

Frank Callanan SC said there had been a great deal of talk about the fact that there was no psychiatrist involved in the X case. But there was a very experienced child psychologist whose evidence was of a very cogent kind, he said.

Earlier, the committee hearings heard that allowing abortion for a suicidal woman marked a change in the law and that it was inaccurate to say otherwise.

Barrister Paul Brady said section or head 4 in the draft legislation creates for the first time a statutory basis in Irish law for what may be a direct and intentional termination of an unborn child’s life.

“Head 4 marks a change in the law. I don’t think its accurate to say otherwise,” said the barrister whose current research is in the role of moral argument in judicial reasoning.

He described as a very noticeable feature of the political debate on the legislation, the extent to which proponents fall back on arguments of legal necessity which emphasise the Governments lack of freedom of choice rather than offering stand alone or policy-based arguments to justify the drafting choices that have been made.

He was speaking during the third and final day of the health committee hearings on abortion, focussing today on legal issues around abortion legislation.

Barrister Simon Mills said the section of the Bill creating a criminal offence for abortion was simply overbroad in the offence that it creates.

He said it was a significant overstatement of the position contained in the 1861 Act, which criminalised abortion.

Under heading or section 19 of the proposed Protection of Life During Pregnancy Bill, it is an offence for a person to do any act with the intent to destroy unborn human life. The section will replace the 1861 Act which bans abortion and will restate the general prohibition on abortion in the State under article 40.3.3 of the Constitution. It also includes an infinite fine and up to 14 years imprisonment.

“If the Bill intended to restate the 1861 Act it misses that mark. And some issue may also wish to be given to the question of the criminalisation of the vulnerable and desperate pregnant woman, which the Act also contemplates.”

“It may well be that thats dealt with by the need to prosecutions only through the director of Public Prosecutions but it is certainly a matter I ask the committee to give some consideration to.”

Solicitor Caroline Simons said however that abortion remained illegal in Britain and a woman had been sentenced to eight years for having an abortion at 30 weeks, so there was a need to retain the provision.

Ms Simons also said abortion had never been shown to be an appropriate treatment and it was not prescribed for complications of pregnancy in which psychiatrists had expressed opinion.

Psychiatrists do not treat suicidal intent with abortion, she added. A woman chooses this treatment for herself.

Senior counsel Tony OConnor said he agreed with the view of the Medical Council the draft heads did not make it clear how a decision about a procedure which may cause the ending of an unborn human life will be enable where the pregnant womans capacity to consent o refuse may be impaired.

Man who loses bag with €40,000 of cocaine rings gardaí to report it missing 10:06
O’Gorman apologises for communication failure over mother-and-baby homes 09:30
A wall of evasions and denials: Ghislaine Maxwell’s deposition revealed 09:06
Australia rule out taking a knee against All Blacks 09:04
Lull in staycations drives hotel occupancy rates down 60% 08:56