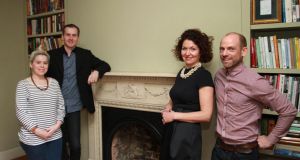 The mantelpiece is the place to place party invites, position Christmas cards from friends old and new, and leave a nip of whiskey for Santa and some carrots for Rudolph on December 24th. If you haven’t got a mantelpiece, you could even use a shelf. “My mantle reflects the round shape of the classic Christmas-tree decoration,” explains antique dealer Niall Mullen.

The look starts with a gold ovoid crib that tells the story of Christmas. The Alessi design, available at Brown Thomas, Dublin, features porcelain figures of Joseph, Mary, baby Jesus, a donkey and cow in a manger, €79. You can add to the group. The Magi, Caspar, Balthazar and Melchior, cost an additional €36 together, the shepherd and his camelare €25.

A Regency brass and cut-glass candlestick, decorated with a sea horse, one of a pair (€1,375) adds further illumination with red berry lights, €4.99, reduced from €9.99, at Home Store and More, giving the scene a rosy glow.

A series of paperweights, from €30 each, and a Christmas rose in a metallic vase, available from select florists, all echo the bauble shape.

A large Victorian silver glass ball, a cool piece that can also be hung like a disco ball of its day, €350, completes the picture. 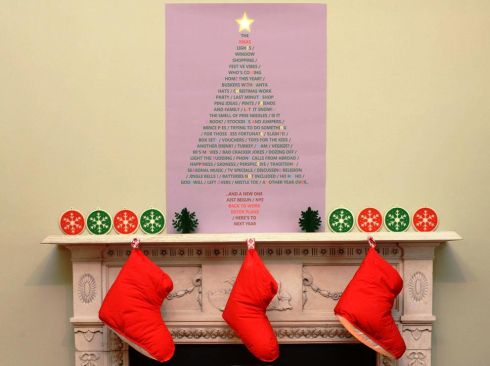 Eoin Whelehan is the animator and graphic designer credited with reimagining the modern Irish poster. You may recognise his Five Stages of the Irish Summer, Pigeon Irish, A Toastie Map of Dublin and Symptoms of the Fear; they formed part of 35 Days, a project in which he set himself the challenge of creating a new artwork every day for 35 consecutive days.

His look centres around an A1 poster, made of 180gram Ilford superior matte paper, as the “ultimate easy, cheap, Christmas-tree alternative that can be rolled up and stored under the couch or under the stairs after January 6th”, he says explaining: “Originally a Christmas card for Designist it’s a simple affair that captures the expectation, the build-up to meeting people, the madness of it all, the way it wears you out slightly and how you look forward to it and dread it at the same time.”

All Joy Designs felt coasters, €10 for a pack of four, at Designist.ie and Five and Dime, Dame Street, Dublin 2, have been Blu-Tacked to the wall to frame the poster which can be ordered direct from Eoin and costs €40 in A1 format and €60 in A0 format. The stockings are vintage Ikea. They currently have gorgeous red gingham slippers, €12, that are similar in shape to the ones pictured. 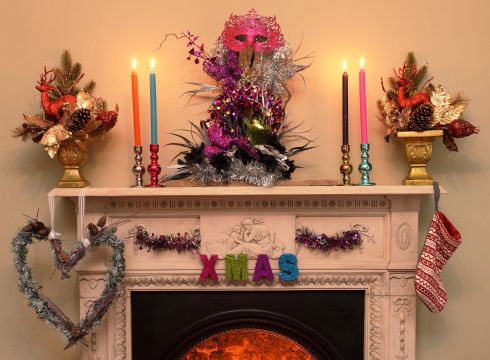 When American Vogue’s creative director Grace Coddington and photographer Annie Liebovitz came to Ireland to shoot for their September issue, earlier this year, it was stylist Grace Moore they called on for local knowledge.

Moore is also actress Saoirse Rowan’s go-to girl for her red carpet and off-duty looks. “Christmas is a fun time of the year,” she says. “I wanted to rethink the traditional colour palette of red and green with hot neon pink and the funkier cooler shade: turquoise. I’ve kept the gold and silver also synonymous with the season but have gone for gilding that is grittier, more ghetto fabulous than upscale.”

To give tinsel a 2013 treatment she enlisted the help of her sister, Joanne Callaghan, to make quirky creations that form her centrepiece, €45, and end pieces, €25 each. These can be bought from Callaghan at the Southgate Christmas Market, Southgate Shopping Centre, Drogheda, today, December 14th and tomorrow, the 15th.

The wicker heart, €28, is also by Callaghan. The metallic candlesticks, €2 each, and coloured candles, two for €1, are from Tiger Stores. 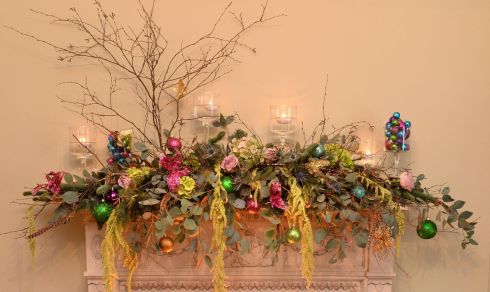 Wedding and event planner Tara Faye of Xena Productions has teamed up with Mark Grehan of The Garden, in Powerscourt Townhouse Centre, Dublin, to create a foliage-led treatment with a fashion element.

“We wanted to take the colours of peacock feathers and frame them in a way that felt classic yet contemporary,” Faye says.

The mantle is strewn with greenery; noble fir, silver birch twigs and bunches of eucalyptus set into blocks of oasis.

The natural element is overlaid with pops of neon colour; pink butterflies, €3 each, and turquoise and pink baubles, part of a pack of 50 that costs €10, both from Dunnes Stores.

A silver birch branch acts as a minimal Christmas tree on which a couple of gold birds, €5 each from Brown Thomas’ Christmas shop, are placed.