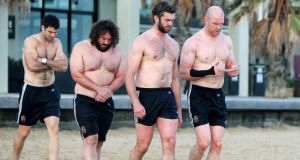 They may have been blessed to be the first Lions Test team with two former captains in their ranks but with the loss of one of them suddenly the tourists look denuded of generals alongside their young captain, Sam Warburton, especially up front.

Paul O’Connell has been immense since the squad first came together in the Vale of Glamorgan six weeks ago, and now his absence leaves a huge void.

If it’s cruel on him to miss out on the rest of the tour with a fractured forearm having recovering from a back operation on New Year’s Eve, it’s equally damaging for the Lions.

One suspects O’Connell even surprised the management with the trademark force of his personality, not to mention the tackling, carrying, breakdown work, lineout skills and innate sense to come up with the big play at the big moment. At 33, he was playing as well as ever and like any pack with him as a fulcrum, you could throw a blanket over them. He’s a loss.

‘He’s one of the best [locks] and he’s in the form of his life as well,” admitted forwards coach Graham Rowntree yesterday. “He came into selection quite late because he’d been out for so long with injuries during the season. Suddenly he came back on the radar after that game against Quins in the European Cup. He was fit, in fact I don’t think he’s ever been fitter.
“He’s a good leader, without stamping over what Sam says. Paul is a very good leader within the group but he is very respectful of Sam being captain. He leads by example.”

Trusted Lieutenant
Suddenly, of the pack only Jamie Heaslip has experience of captaining at the highest level as a trusted lieutenant for Warburton.

Geoff Parling, a noted lineout operator as well as an unstinting worker around the pitch, will replace O’Connell, after he was withdrawn from captaining the Lions today against the Melbourne Rebels.

“We’ve said that right from the outset; that the attitude and intensity of the midweek team makes the series, because on a Saturday they were the ones who were straight into the changing-room, congratulating the lads,” added Rowntree.

He described Parling’s form for England this season as “exceptional”.

“He certainly helps me within the group, having such leadership in the lineout. But Geoff is more than just a lineout forward. He’s a very clever footballer, a good ball-carrier. His workrate involvement is very high and he is getting better and better, but he has got to be to go in a squad like this one.”

The Lions have also been hit by a knee injury to Alex Corbisiero, which has made him a major doubt for the second Test and makes Mako Vunipola a real target for the Wallabies at scrum time.

Court’s call-up
Speaking of Tom Court’s ensuing call-up from holidays in his native Brisbane with his family and friends, Rowntree said: “We are not quite sure whether he [Corbisiero] will be right for the weekend.

“He is certainly out tomorrow night so we need a bit of cover. Tom happens to be in Brisbane. I didn’t realise he was Australian. He gives us good cover, temporary cover, for Corbs.”

The Wallabies have also been hit by injuries and yesterday confirmed centre Pat McCabe (neck) and winger Digby Ioane (shoulder) will play no further part in the series.

The pair will be joined on the sideline for the second Test by fullback Berrick Barnes, who was concussed in the first half of last weekend’s match and has been ruled out of the second Test.

Leali’ifano recovering
But inside centre Christian Leali’ifano is “making an excellent recovery after he too sustained concussion, in the opening minute of the first Test” according to a Wallabies statement while Adam Ashley-Cooper (shoulder) should also be fit for next Saturday’s game.

A warrant was also issued for Ioane’s arrest yesterday after he failed to show for a court hearing into allegations of assault, with a new date for his hearing expected to be set in the next few days.

1 Diarmaid Ferriter: We are being infantilised on Covid-19 by an immature Government