Gentle radical who fought for a more just Irish society

Obituary: The teacher and equality campaigner Ann Louise Gilligan believed in the rich rewards of altruism 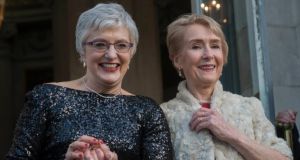 A gentle radical whose elegance, sensitivity and deep spirituality were matched by her quiet but fearless dedication to the creation of an equal and fair society, Dr Ann Louise Gilligan leaves a rich legacy for future generations through her activism as an educator.

Although her public profile is most associated with the campaign she championed for marriage equality with her life partner, Minister for Children and Youth Affairs Dr Katherine Zappone, Gilligan’s educational work reaches into the backstreets of such Dublin suburbs as Jobstown, in Tallaght, where she cofounded An Cosán, in 1999. This community education centre, which has transformed the lives of thousands of people, particularly women, once dependent on social welfare, grew out of the Shanty, a building in the couple’s back garden in Brittas, Co Dublin, established for the initiative in 1985.

From a prosperous family who lived on Nutley Park, in Donnybrook in Dublin, Ann Louise Gilligan was one of three siblings born to Imelda and Arthur Gilligan, a publican. She was educated at Loreto College Foxrock, whose nuns had a very positive influence on her, whetting her interest in the discipline of their community life, which ultimately informed her decision to pursue an academic career. But her teenage devotion to God did not preclude her from sneaking out, during school breaks, on a scooter her father had bought her and stocking up on goodies for her classmates.

Deeply influenced by a line in scripture, ‘What return shall I make to the Lord for all he has given me?’, she cut her hair and became a postulant, much to her father’s horror

Deeply influenced by a line in scripture, “What return shall I make to the Lord for all he has given me?”, she cut her hair and became a postulant, much to her father’s horror. She went on to study theology at Mater Dei Institute of Education and taught for a time at Loreto College. Gilligan’s faith in the rich rewards of altruism was not dependent on an institutionalised life and had been expressed through her volunteering with the Samaritans and the Society of St Vincent de Paul from an early age.

However, her love of convent life was challenged after she was told she would not be sent abroad as a missionary and was bound to remain in Dublin. When she realised her faith was not strong enough to fully embrace the life of a nun she left the convent, in Rathfarnham, and in the early 1970s worked for a time as an au pair in Spain.

A subsequent scholarship to the Institut Catholique de Paris, or Catholic University of Paris, meant she spent two years studying for an MA there while honing her French, returning to a position teaching at St Patrick’s College in Drumcondra, in north Dublin, in 1976.

Her life changed for ever after she moved to the United States, in 1981, to pursue a PhD in theology, on the subject of the philosophy of imagination, at Boston College. It was there she met Katherine Zappone, a Seattle woman who was the only other theology-doctorate student. Within six weeks they had committed to a life together, and some months later they became engaged. They returned to Ireland in 1983 because of Gilligan’s love of her native country and her commitment to her teaching role as a theologian and philosopher at St Patrick’s.

With the traditional Catholic ethos of St Pat’s, and a pervading stigma attached to being gay, Gilligan felt unable to come out at work

With the traditional Catholic ethos of St Pat’s, and a pervading stigma attached to being gay, Gilligan felt unable to come out at work. This was compounded by the fact that homosexuality was not decriminalised until 1993.

A decade later the couple married in Vancouver, on the west coast of Canada, and on their return applied to the Revenue Commissioners to be taxed as a married couple but were turned down. This effectively precipitated a long legal quest that culminated first in the Civil Partnership Act of 2010 and the groundbreaking success of the marriage-equality referendum of May 22nd, 2015.

While Gilligan and Zappone became a poster couple for the yes side and for the wider campaign for equality for the LGBT community – Zappone proposed on air, during the celebrations at Dublin Castle after the referendum was carried – they were still busy with all their other professional commitments. They did find time, however, to marry under Irish law, at Dublin City Hall, on January 22nd, 2016.

Over Gilligan’s 33-year career at St Patrick’s College and Dublin City University (whose institute of education St Pat’s became part of) she lectured in the philosophy of education, postmodern philosophy and gender studies, with a working ethos always underscored by innovative and imaginative ways of challenging disadvantage.

Meanwhile, An Cosán was continuing to develop; today it includes a virtual community college.

Gilligan retired from her formal teaching work at St Patrick’s and DCU in 2009. This gave her more time for hillwalking in the nearby Wicklow Mountains with the Bootleggers, indulging in the occasional glass of wine while listening to her favourite jazz or classical music, and appearing with Zappone on Room to Improve, RTÉ’s home-renovation series.

A brain bleed in 2013 may have stopped her riding her BMW motorbike into Blessington for the weekly shopping, but it did not repress her indomitable spirit from continuing her lifelong journey of imaginative thinking, talking and writing about a more just Irish society through “soul work in the public sphere”.