Adventure holidays have an element of risk, but they can be life-enhancing too 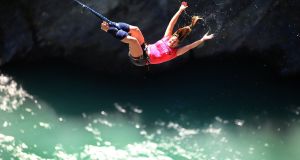 Those with vascular disease, eye problems and reduced bone density may be at greater risk of injury from bungee jumping

In EM Forster’s A Room with a View (1908), Miss Lavish gets lost in Florence and exclaims to Lucy: “Two lone females in an unknown town. Now, that is what I call an adventure.”

But what the 2016 Adventure Tourism Development Index (ATDI) calls an adventure is a trip that takes “an individual outside of his or her regular environment for more than 24 hours – and for no longer than one consecutive year – and include[s] at least two of the following three aspects: participation in a physical activity, a visit to a natural environment and a culturally immersive experience”.

With the ATDI valuing the adventure tourism market at $263 billion (€236 billion) – it grew by 65 per cent between 2009 and 2012 – Miss Lavish and Lucy’s Edwardian travails sit at one end of a spectrum which is freighted with significantly greater hazards than taking a wrong turn in Florence.

Someone with expert knowledge of the medical challenges at the other end of the adventure holiday spectrum is Prof Gerard Flaherty of NUI Galway.

Prof Flaherty is clear that adventure travel confers many health benefits. “These include positive mental health effects; group camaraderie; escape from one’s routine; physical exercise; and the development of useful skills which help make an individual more resourceful in their home environment,” he says. But Prof Flaherty also observes that the risks of adventure travel are substantially increased compared with other forms of travel.

“This is because destinations may be remote; access to medical care may be challenging; communication may be limited; travellers may be subject to extreme weather and terrain; physical exertion increases the risk of dehydration, heat or cold stress and may be life-threatening; trips are often extended; and such travel is often goal-oriented, which may cause travellers to exceed safety parameters.”

One goal that may cause safety parameters to be exceeded is that of securing a “selfie”. A relatively recent phenomenon, selfies are typically snapped to provide evidence that “Fun Was Had”, and last year a report in the Journal of Travel Medicine, co-authored by Prof Flaherty, referred to “braggies”.

These are selfies “taken in desirable locations for the purpose of rendering one’s social contacts jealous”. The report cited the death of a Japanese tourist who allegedly fell down the stairs while taking a selfie at the Taj Mahal; a 17-year-old Russian photographer who died after falling from a St Petersburg railway bridge; and a middle-aged hiker walking in Wales who was killed during a thunderstorm when lightning struck his selfie stick.

Last year a report in the journal Medical Clinics of North America noted that filmmaker Carl Boenish coined the acronym BASE in 1981 to describe the objects that parachutists jumped from: buildings, antennae, spans (bridges or arches) and earth formations (such as cliffs).

For those intent on participating in the several legal Base-jumping events held around the world, the report authors point out that the practice “is associated with 5-to 8-fold risk of injury relative to sky-diving” and that injuries occur in 0.2 per cent to 0.4 per cent of jumps, with the main cause of injury and death due to collision with the object being jumped from.

Although the commonest kayaking injuries are blisters – typically benign – shoulder injuries, especially dislocations account for between 5 per cent and 15 per cent of all injuries to kayakers and are mainly due to poor technique. Unsurprisingly, more novice kayakers sustain impact-related injuries because they often capsize.

For white-water rafting the injury rate is 0.26 to 0.44 injuries per 1,000 participants, with most injuries occurring in the raft - typically after being struck by a paddle or other equipment or after falling from the raft into dangerous waters. However, most white-water rafting injuries are relatively minor, comprising lacerations, sprains, strains, fractures, contusions and dislocations.

“Adventure travel,” says Prof Flaherty, “puts the traveller at greater risk of certain infectious diseases, such as rabies, leptospirosis, histoplasmosis and hepatitis B. Failure to access clean water or to disinfect it increases the risk of traveller’s diarrhoea from a range of enteropathogens, as well as hepatitis A, typhoid and cholera in certain destinations.”

And a review published this year in the journal Travel Medicine and Infectious Disease confirms this. White-water sports in a range of climates and terrains provide opportunities for infection after swallowing water or inhaling spray.

For example, leptospirosis is a bacterial infection spread through water contaminated with the urine of infected rodents, although other animal reservoirs – dogs, cattle, bats and sea lions – have recently been suggested.

Leptopirosis outbreaks have been reported among rafting groups in Thailand, Sri Lanka and Switzerland, and one Belgian travel clinic reported 15 cases of leptospirosis between 2008 and 2011, with four cases occurring after white-water sports.

The parasitic disease schistosomiasis is caused by the Schistosoma trematode, which can penetrate the skin within 15 minutes of contact with fresh water, whether domestically or recreationally, and the authors highlight “a common misunderstanding among travellers and white-water guides that flowing water negates the risk for schistosomiasis . . . travellers should be advised about the risk of schistosomiasis in all endemic freshwater”.

A recent report in the Journal of Public Health revealed that one-quarter of travellers returning to Scotland – most having visited Africa - had been infected with the schistosoma parasite. Schistosomiasis affects more than 200 million people in over 74 countries, including Lithuania and Corsica.

Converts to “volcano boarding”, where one sits on a wooden board and plummets down the side – the outside, that is – of a volcano, may risk contracting the respiratory fungal infection histoplasmosis. The authors of a recent study in the journal Travel Medicine and Infectious Disease describe how a Dutch couple were hospitalised a fortnight after returning from a three-week round trip to Nicaragua, where they “. . . had massive soil exposure during volcano boarding from the Cerro Negro Volcano near Leon . . . Speeds up to 90kph can be reached and our patients reported to have inhaled considerable amounts of volcanic dust”. Lab results suggested exposure to the fungus Histoplasma capsulatum, which is widespread in Central America, with exposure to contaminated soil a well-known risk factor for infection.

Prof Flaherty told The Irish Times that recommended vaccinations for adventure travellers include tetanus, hepatitis A, hepatitis B, typhoid, rabies, and in some cases, yellow fever, cholera, tick borne encephalitis and Japanese encephalitis. “The travel consultation,” he explained, “should ideally take place at least two months before the planned departure date and in some cases, a course of injections will be required to achieve immunity.”

Prof Flaherty makes the point that self-planned trips are generally more risky and the traveller will need to be carefully educated about the medical risks involved and how to mitigate them. This will include carrying a comprehensive medical kit which may include prescription medication for self-use.

“In addition,” cautions Prof Flaherty, “adventure travellers with pre-existing medical illnesses should attend a physician with experience of the effect of extreme environments on these conditions. This is particularly true for patients with diabetes, heart disease and lung disease. Medical clearance for participation may be needed for adventure travellers above a specified age or with certain chronic illnesses.”

When money is no object

And for those wealthy individuals craving high adventure, Prof Flaherty and colleagues note in a report to the Journal of Travel Medicine (2015): “The terrestrial space tourism industry is already witnessing healthy growth, with the emergence of multiple space tour operators and space travel agencies.”

He has this advice for those in search of earth-bound adventure: “Adventure travel is exciting and fulfilling and gives us renewed vigour and perspective. Taking a responsible and organised approach to preparing for such travel will ensure that the traveller does not succumb to the many health risks associated with adventure activities. This must include a pre-travel consultation with a suitably qualified and experienced travel health provider and a visit to one’s local pharmacy.”

‘We cannot get sick here. It will spread.’ Norman lives with 19 others in Phibsborough
9

Lisa Hannigan on Damien Rice: “He didn’t want me in his band anymore, so I left”
10