New X3 prices start at €58,580 and the new car looks generally similar to the outgoing model with design touches from the smaller X1 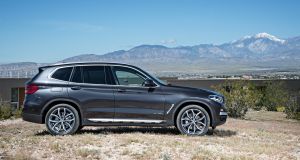 The new BMW X3 looks generally similar to the outgoing model, but takes on the bigger grille and more upright lights of the smaller X1 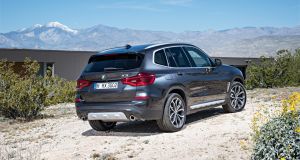 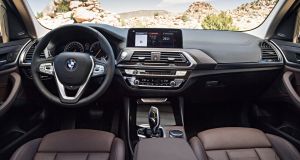 The new X3 looks generally similar to the outgoing model, but takes on the bigger grille and more upright lights of the smaller X1. From the side, you’d be hard pressed to tell old and new X3 apart, but the new model has a 50mm longer wheelbase (which helps with interior space).

That interior is largely drawn from the new 5 Series in its styling, and features the same new iDrive system and 10.3-inch touchscreen, and optional all-digital dials. BMW says that the cabin is more functional than before, with more stowage space for personal items. Boot space is now up to 550-litres, or 1,600-litres if you fold the back seats. There are also some sneaky little x-shapes thrown into the cabin design, such as the embossed X in the electroplated accents in the front and rear doors and another on the B-pillars.

While the suspension has been kept broadly the same as before (with the option of adaptive dampers), the engine lineup is changing subtly. The 2.0-litre 190hp diesel engine is still expected to be by far the best-selling engine option, and that’s joined at the queue for the black pump by the 265hp version of the 3.0-litre straight-six diesel.

There will be a 2.0-litre turbo petrol four-cylinder engine this time, though, and BMW will release details for that a little closer to the X3’s November 11th on-sale date. Topping the range will be a new high-performance model, the first such X3 variant, using a 360hp turbo 3.0-litre straight-six engine and badged as X3 M40i. It can hit 100kmh from rest in just 4.8 seconds, serious performance for an SUV. It will also, by 2020, become part of BMW’s expansion of its battery-powered range - as well as a plugin hybrid X3 30e, there will also be a fully-electric X3 by the turn of the decade.

Co2 emissions start at 132g/km for an X3 20d SE, rising to 138g/km for the popular M-Sport version, and 149g/km for the 3.0-litre diesel. The X3 M40i will have emissions of 188g/km. xDrive four-wheel drive, rear-biased as always, is standard on all models, in spite of which the new X3 is around 55kg lighter than the old one, model-for-model. BMW even claims some off-roading prowess for the new X3, including a water-wading depth of half-a-metre, but let’s just say that if any X3 actually ever goes off-road, we’ll be amazed.

Safety is high on the X3’s list of priorities, and optional extras include Active Cruise Control (ACC), whose capabilities include braking the car to a halt in stop-and-go traffic and automatically pulling away again. The Steering and lane control assistant, Lane Change Assistant and Lane Keeping Assistant with side collision protection all form part of the optional Driving Assistant Plus safety package.

There’s also a new, larger, heads-up display and a built-in SIM card which allows the car to phone for the emergency services in case of an accident.

That SIM card also allows for a broad range of connected services, including traffic, fuel price, and parking live feeds, connections to mobile phones and smart-watches, and on-board Microsoft Office 365 which includes voice-control for emails.

Other standard equipment includes leather seats, ambient interior lighting, the ‘Display Key’ which has its own touchscreen, LED lights front and rear, three-zone climate control, roof rails, and 18-inch alloy wheels. The M40i gets the option of 21-inch wheels.