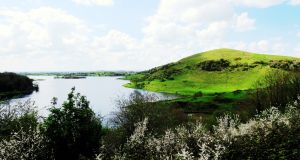 Friends tell me that I am showing increasing symptoms of asociality when they hear that I’ve headed off at dawn to do a walk. It may be essential to start early in winter, no matter where I am headed; in summer it is to summit before the mid-day heat or if my destination is one of Ireland’s “hidden gems” which are no longer so concealed with the development of the Wild Atlantic Way and Ireland’s Ancient East projects. I like to enjoy them in pristine peace and by arriving at opening time there is a good chance of that.

My early arrival at Lough Gur enhanced the atmosphere of a special place that has seen continuous habitation for 6,000 years. I stopped off first to inspect the largest stone circle in Ireland which is just off the R 513 north of Holycross. It is an impressive place indeed, being about 50m in diameter with 3m high stones, connecting rather than free-standing. The utter silence gave the site an expectant air as if a procession of Bronze Age druids would march into view at any minute. The rumble of a passing car broke the spell and I moved on to the entrance which is on the eastern side of the lake which curves around the wooded hill of Knockadoon. There is a good view here of one of the two crannogs on the lake. These are artificial islands which were created for defensive purposes by placing a ring of boulders in the water and filling it with brushwood and soil.

The lakeside was utterly quiet apart from the myriad melodies of the numerous species of birds that are found in the woodlands.

At the end of the public path, there is a track to the left that leads up to Knockfennel which rises out of the lush meadows bounded by coppices of beech and oak to give a view of the southern ramparts of the Munster mountains, stretching from the Galtees all the way west to the vague outline of the Slieve Mish Mountains on the Dingle Peninsula. To the north the mountains bounding the Shannon lowlands were clearly delineated by the morning sun.

I descended to a surreal scene. Dozens of small children dressed as fairies thronged the circular route which starts with a hundred steps. They were on their way to a magic fairy circle where druids awaited to regale them with tales of magic in times past. I felt like Gulliver as I made my way up the steps to a path lined with white thorn in full flower which provided an attractive floral foreground to the placid waters below. Finishing the circuit, without trampling on a pixie, I called into the heritage centre which is one of the more impressive I’ve visited with panels and artefacts detailing the lives of the generations who have lived here.

As I drove off from the now packed car park, it struck me that I hadn’t been in the least bit irritated by the crowds. The mindfulness must be kicking in.

How to get there: Turn off the R 514, Limerick-Mitchelstown Road at Herbertstown. Or turn off the R512 Limerick to Bruff Road at Holycross.