‘How I got a new passport in less than 24 hours’

Given the high number of pre-Brexit applications for Irish passports, Arlene Harris skips the queues and gives the online service a try 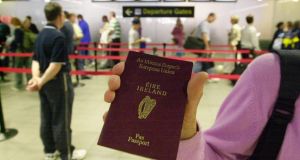 ‘I travel a lot and I was anxious about sending away my old passport in case it took up to six weeks (which it has done in the past) for a new one to arrive.’ Photograph: Alan Betson

Getting a new passport has always been a bit of an inconvenience. The thought of filling out forms and getting photos taken can seem like an endless succession of fiddly little jobs. Especially when most of us only remember to do so when we urgently need the passport.

I’m heading to Boston in October and while I would still have six months on my passport, I know US immigration can be picky, so I thought it would be best to apply for a new one.

But as I travel a lot, I was anxious about sending away my old passport in case it took up to six weeks (which it has done in the past) for a new one to arrive. Plus there was the whole palaver of picking up a form, filling it out (with a black pen or you will be asked to redo it, as I have learned to my cost), going to a professional photographer to have four shots taken and then taking the whole kit and caboodle down to the local Garda station to have it stamped and approved.

The mere thought of all of this was exhausting and needless to say, I put it off for as long as possible.

But forcing myself into action, I decided last week to get it sorted – I had no trips planned for the next few weeks so I would be fine to be without a passport for a while.

So I trotted down to the post office, picked up a form and diligently filled it out. Then I made another trip into town and got my photos taken – I was good to go. Now all I had to do was taken the form and photos to be verified by a Garda and send the package off.

I had gone through a similar process in January for my three sons, so I knew the score – or so I thought – because as I was debating whether to send a cheque or my credit card details, my husband casually mentioned the online renewal service.

Well that threw me.

Initially arguing that it wouldn’t be possible to do the whole thing online, my more observant other half, showed me where in bold black writing at the front of the form it announced exactly that service.

But he persuaded me to stand still for a photo - neutral expression against a white background - and I saved it to my computer.

Then giving him the benefit of the doubt, I went on to the DFA website and followed instructions for renewal.

It was incredibly straight forward and easy to use.

However, the first photo I uploaded was deemed ‘unsuitable’ so I presumed this was the ‘catch’ which would prevent the process from happening. But when I uploaded the second one, it was accepted.

I moved on to old passport number, address and payment details and five minutes after I logged on, my application had been successfully registered – and I didn’t have to relinquish my old passport.

So far, so good - I thought, but how long would it take?

I was expecting a package to arrive a week or two after my application - but the following morning – yes, you read correctly – a fat package arrived through my letterbox bearing my new passport.

For exactly the same price as the old method, I had ordered and received my new passport within 24 hours. Given that the Passport Office is currently swamped with requests from people wanting to officiate their Irish heritage before Brexit occurs, this efficiency seems even more noteworthy.