The capital, celebrating its 450th anniversary this week, is a Mediterranean jewel. So why is the city so empty? 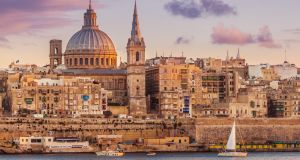 Valletta skyline at sunset with the Carmelite Church dome and St Paul’s cathedral. A world-heritage site, Unesco calls this time-warp city “one of the most concentrated historic areas in the world”

The first thing that can strike you about Malta, a tiny island in the Mediterranean approximately 17 miles long and nine miles wide, are the sheer number of people on it – 425,000 inhabitants plus another million or so tourists each year – making it the most densely packed place in Europe. Worst of all are the number of cars, some 300,000 – an insane amount – many of them driven by people seemingly determined to run you over.

What a relief then, to find a safe haven on the island. A place virtually without cars. Or even people. A city so beautiful and so quiet that at night you cannot help but feel as if you have wandered on to an incredible film set, after everyone else has gone home. Which makes it all the more surprising, then, that this is Malta’s capital city, Valletta, as it celebrates the 450th anniversary of its founding this year.

It was built following the Great Siege of Malta which required it to be so fortified and spectacularly mounted that not even the Luftwaffe managed to destroy it some four centuries later. And yet it is virtually empty today, mysteriously unloved and unlived in (with only 6,500 inhabitants), as if something terrible happened that sent everyone running for the hills.

So what did happen here, you wonder, as you walk the empty, darkened streets? Where are all the people?

During the morning, they pour into the fortified city across Valletta’s dramatic drawbridge entrance. They set up their market stalls, open their shops, bars and restaurants, in preparation for the thousands of cruise-ship passengers and tourists who also pour in here every day. Or they go to their offices to work. Parliament is here. So is Malta’s stock exchange – housed in a former chapel!

Then, around 6pm, or later perhaps, after the restaurants close or the opera house finally empties, they all go home and leave you standing alone in a European capital city entirely by yourself like the star of a dystopian Danny Boyle movie...

It’s a strange feeling; utterly strange, utterly enchanting. The empty film-set feel is far from whimsical, either. Valletta has proved an incredibly versatile character actor for many major Hollywood productions recently, doubling as Rome, Jerusalem, old Istanbul and even medieval Madrid. Old Havana would not be a bad comparison either, given Valletta’s languid Mediterranean climate, but even there, among the dilapidated colonial ruins, you would at least eventually come across a policeman. Whereas here even gaping across the Grand Harbour at one of the most epic views in the world, the only nighttime company one seems to have at all are ghosts.

And what ghosts. Back in 1565, an Ottoman army comprising of 200 ships and some say 30,000 men (including 6,300 Jannisaries, fearsome warriors trained as fighters from the age of seven), came here and took hold of this rocky, barren peninsula on which Valletta stands today. Pitted against them on the other side of the Grand Harbour was a much smaller force of only 8,000 to 9,000 men, including the now famous Knights of Malta, facing some of the worst odds in military history. And yet somehow – after a lot of decapitated heads were thrown back and forth – the Ottomans lost.

Valletta was therefore built not just out of necessity but in a spirit of Christian reverie, making it one of the most impressive, even opulent cities on earth (visit St John’s Co-Cathedral and see if your jaw doesn’t hit the floor). So impressive in fact, it might even have inspired New York – at least as the first city ever built on a grid system. But even New York, I’ll wager, doesn’t have a shop where you can still buy an original, handmade Roman costume, like the one they made here for Russell Crowe in Gladiator – in Valletta there are surprises like that around every corner.

A world-heritage site, Unesco calls this time-warp city “one of the most concentrated historic areas in the world”. Its streets slope magnificently but a glimpse of brilliant blue at the end of many of them reminds you that Valletta is a very small city – less than half a square mile – almost entirely surrounded by water. It is Europe’s smallest capital, as well as its southernmost. However, it is all too easy to forget sometimes, especially with its British red telephone and pillar boxes, that you are more south here even than Tangiers or Tunis in Africa, or Mosul in Iraq.

All of which, though, still doesn’t answer how the city came to be so bereft. Why only one house in 10 looks even lived in, while the rest stand darkened and decaying like haunted ruins, exactly as they were left.

In the decades following the second World War, and Malta’s independence in 1964 – which meant the withdrawal of the British navy and its economy – Valletta’s exodus was caused by the usual suspects. Migration, lack of opportunity, changing economic fortunes. Like in Ireland, some people just wanted cosier, modern homes too, I’m told. And so Valletta was slowly abandoned, leaving only the die-hard, poor and the elderly behind.

As a consequence, many of Valletta’s old villas and much of its prime real estate is in a state of paralysis – its original owners having multiplied abroad into squabbling diaspora unable to get any agreement. This won’t last though, as tourists and Maltese alike rediscover their passion for this most romantic of cities, with multiple signs already that is beginning to open up again like a fantastic old vampire emerging from its long slumber, as I like to think of it when wandering at night under wooden balconies, gothic street corner statues, and marvellous stone-carved grotesques... if only to suck the life out of the tourist trade anyway.

For the time being though, this unique, extraordinarily underrated city exists in a wonderful twilight – caught somewhere between having been almost entirely forgotten, and about to go through the roof. More quiet and empty at night than a provincial French village, yes, but far from dead and with an ever-increasing, ever intoxicating nightlife of cosy cellar bars, restaurants and boutique hotels popping up daily now, their doorways glowing like lighthouses on the darkened streets.

A stunning, baroque almost empty European capital on the verge of exploding back on to the scene as it takes over as European Capital of Culture in 2018.

Ah well, nothing good ever lasts, does it?