Where to stay, eat, sleep, drink and visit 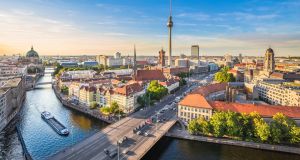 Berlin: Visitors are spoilt for choice when it comes to boat trips, as the city boasts miles of tranquil waterways. Photograph: Getty

Berlin’s architecture is magnificent, and the best way to take a tour is from a river boat on the river Spree. Visitors are spoilt for choice when it comes to Berlin boat trips, as the city boasts miles of tranquil waterways. Sail down the Spree, which winds through the city centre, taking in sights such as the Reichstag, Berlin Cathedral and Museum Island. Tickets can be purchased on visitberlin.de.

A visit to Berlin isn’t complete without the delicacy of currywurst: a frankfurter in a roll with a spiced-ketchup curry sauce. This fast food appeared after the war and is cheap, cheerful, popular and available all over the city from street carts and cafes.

Go for tea in the Tiergarten and enjoy Berlin’s 520-acre green lung. The Tea House has a lovely terrace and views of the landscaped parkland. Cafe am Neuen See to the south is beside a small lake and the beer garden is open almost all year round. In the Tiergarten you can see the Memorial to the German Resistance and monuments to activists Karl Liebknecht and Rosa Luxembourg. There is often music in the park, particularly on summer Sundays. See visitberlin.de.

It’s hard to say skip Museum Island with its fabulous museums, including the Pergamon’s art and architectural treasures. However, the DDR Museum is fascinating. See how people lived, furnished their homes and what they ate during the 1949-1990 communist period. Learn about waiting times for simple things like a roll of wallpaper and how there was often just one design available to everyone. DDR Museum Karl-Liebknecht-Str 1, ddr-museum.de/en.

The Mauerpark Market runs on Sundays from 9am to 6pm. It is a huge flea market near the site of the former Berlin Wall. There are hundreds of stalls selling the usual flea market wares including clothes, shoes, crafts, jewellery, and great food stalls. On Sunday afternoons from spring to autumn there is a karaoke session in the open air amphitheatre and it draws a great crowd. Bernauer Strasse 63-65, 10435 Berlin. See berlin.de.