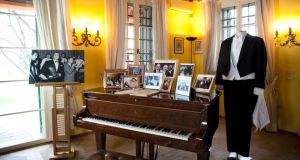 Luciano Pavarotti’s Modena home is now open to the public as a museum. Photograph: Alpha

Luciano Pavarotti’s Modena home is now open to the public as a museum (Stradello Nava 8; www.casamuseolucianopavarotti.it; admission €8) – featuring his art collection, extravagant clothing and personal mementos, as well as the riding school that was his other passion.

Meanwhile, Milan has paid tribute to the legendary tenor by opening a museum and restaurant dedicated to his name, on the fourth floor of the trendy Piazza Duomo 21 bar-and-restaurant complex overlooking the cathedral. The pasta-and-photographs tribute has walls lined with images of the big man and a menu with his favourite dishes, including tortellini and tagliatelle al ragù.

And when you’re done, take a behind-the-scenes tour at nearby La Scala (teatroallascala.org; €7), the world-famous opera house where Pavarotti made his debut exactly 50 years ago alongside Mirella Freni in the revival performance of Zeffirelli’s La Bohème, conducted by Herbert von Karajan.

Five things to see & do in Havana

The US and Cuba have just agreed to open embassies in each other’s capitals. It’s another important step in the normalisation of relations between the two countries, but some observers will say it’s the beginning of the end for an “authentic” Cuban experience. Here’s five to cherish in Havana before it’s too late:

Callejón de Hamel The home of Havana’s Afro-Cuban culture is this stretch between Aramburu and Espada in Centro Habana. There are colourful street murals and even more colourful art shops, but the real draw is the rumba session that takes place every Sunday from noon, which is raw, sensual and completely hypnotic.

Fortaleza de San Carlos de la Cabaña The highlight of a visit to this massive, 18th-century fort built by the British is the nightly cañonazo ceremony, when actors dressed in military uniforms re-enact the firing of a cannon over the harbour. There’s also a museum devoted to Che Guevara.

Habana Vieja The focus of most visitors’ efforts is the old town of the capital, home to nearly 1,000 buildings of architectural and historical significance, with styles ranging from high baroque to modern art deco.

The Malecón The neoclassical and art nouveau buildings that line Havana’s 8km-long sea drive have fought a long battle with the corrosive effects of the ocean, which regularly casts its waves across the street and against the facades.

When the sea is especially agitated the street is closed to traffic and you can walk down its centre – and get soaked.

Museo Napoleónico A beautiful Vedado mansion that houses more than 7,000 objects associated with Napoleon – courtesy of a lifelong obsession of a sugar baron and politician.

Paintings, furniture, a recreation of the emperor’s bedroom and a death mask are some of the items on display. The views from the fourth floor terrace are worth the effort, too.

Say ‘I do’ in Stockholm

City officials in Stockholm have announced that couples will be able to marry for free at City Hall (below) during Stockholm Pride Week, the largest pride festival in Scandinavia, which runs from July 27th to August 1st.

Non-residents usually have to pay a fee of 500 kronor (€54) to tie the knot, but the fee is being waived for same-sex and heterosexual couples willing to say “I do” on Friday, July 31st, between noon and 3pm.

Refreshments and photographs are also included, but interested parties are urged to book their spot in advance. See stockholmpride.org.

Fitness buffs on the move will invariably look for the best places to go for a run when on a city break.

Strava has you covered, with a series of “athlete-curated travel guides” for 12 cities around the world, including London, Paris and New York.

It shows the popular routes, along with distance and elevation; tracks your run and rides, syncs with your GPS device and also provides info on the best pit stops and photo ops. See strava.com/local.

CityJet (cityjet.com) has announced a new service between Cork and London City Airport from October 1st.

It will fly three times daily on weekdays (with the first flight departing at 7.40am), once on Saturday and twice on Sunday. The expansion comes on the back of the success of the Dublin to London City route, which has seen a 50 per cent increase in passengers in 2015 over the same period in 2014.

School’s out for the summer, which means it’s time to look for family deals. The Belline Estate (tridentholidayhomes.ie) in Piltown, Co Kilkenny, has two newly refurbished houses that sleep up to eight in each; seven days self-catering in each costs €1,250 until the end of August – and dogs are welcome.

The Carraroe Holiday Village (carraroeholidaycottages.ie) in Connemara is offering seven nights self-catering in a three-star traditional cottage that sleeps five for €650 or a four-star luxury lodge that sleeps eight for €875. This offer is valid until August 31st.

DO Akihabara – a quirky, neon-bright neighbourhood: it’s the cultural HQ of anime and manga and is a place like no other.