Travel Desk: Are Irish holidaymakers the happiest in the world? 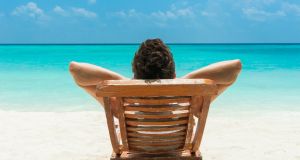 The Irish are the world’s happiest holidaymakers, according to a study by booking site Expedia. The company’s Vacation Deprivation study reveals that 95 per cent of Irish people derive happiness from being on holidays, compared to the global average of 85 per cent. The Irish also get more out of the post-holiday glow, with 93 per cent reporting that they felt more rested after their break and 72 per cent saying they came back more focused. However, the Irish are towards the bottom of the holiday entitlement list, with an average of 22.6 days a year (European average is just over 33). More than three-quarters (77 per cent) take their full entitlement, and the majority (62 per cent) prefer to take several short trips rather than one long holiday (21 per cent).

PLACES TO VISIT IN VIENNA

Unesco has just added the horsemanship of the famous Lipizzaner horses at the Spanish Riding School in Vienna to its list of intangible cultural heritage. Here are five other cultural experiences in Vienna:

Hofburg Imperial Palace (Michaelerkuppel; hofburg-wien.at). The Hapsburgs made Austria their winter home from 1273 to 1918. Today the palace is home to a collection of museums, the national library and the offices of the country’s president. A stroll through the grounds is enough to appreciate its magisterial size.

Kunsthistorisches Museum (Maria-Theresien-Platz; khm.at; admission €14). Vienna’s answer to the Louvre and the Met is this magnificent gallery, chockablock with artistic treasures from ancient Egypt up to more modern times. Star exhibit is the Picture Gallery and its fine collection of Old Masters.

Musikverein (Bösendorferstrasse 12; musikverein.at; tickets from €25). With arguably the best acoustics of any concert hall in Europe, this opulently decorated hall is where the Vienna Philharmonic perform on a regular basis. Biggest night on the calendar is New Year’s Eve, although tickets for that concert can go for up to €1,000.

Schloss Schönbrunn (Schönbrunner Schlossstrasse 47; schoenbrunn.at; admission €12). In summer, the Hapsburgs would retreat to this 1,441-room palace, taking walks amid the fountains of the French-style gardens. The tour explores but a fraction of the palace, but it’s enough to make you appreciate how outrageously grand this place is.

Vienna Boys’ Choir (wienersaengerknaben.at). Maximilian I founded the choir in 1498, getting rid of the traditional castrati singers in favour of boys with unbroken voices. And so the world’s most famous choir was born, their celestial tones echoing through the chamber of the Imperial Chapel of the Hofburg. The choir also performs at MuTh (muth.at)

Paris’s Musée Rodin (77 rue de Varenne, 75007; musee-rodin.fr; admission €10) has finally reopened after an extensive three-year renovation. The 1730 Hôtel Biron, home to some of the world’s best-known sculptures including The Thinker and The Kiss, was Rodin’s studio until his death in 1917, before opening as a museum two years later.

The €17 million facelift has resulted in a new layout that will highlight Rodin’s creative development and showcase previously unseen works, as well as paintings from Rodin’s private collection, including works by Vincent Van Gogh and Edvard Munch.

APRIL LOUNGE FOR THE 1%

Los Angeles International Airport is to build a posh private lounge for its glitterati passengers. The paparazzi-proof lounge will allow celebrities, sports stars and the wealthy elite to enjoy suites and showers and meals prepared by top chefs, as well as separate security lines, border checks and private transport to their first-class seats ... all without interacting with the hoi polloi.

Although the lounge will be in a separate building to the main terminal, guests will not be expected to walk more than 60 steps from arrival to departure, compared to the 2,000-plus steps regular passengers have to take.

American Airlines has launched an investigation into how a dog ended up on a flight to Honolulu instead of Mississippi. A Pembroke Welsh corgi called Bethany was scheduled for transport from Seattle to Jackson, but baggage handlers in Dallas accidentally put her on a flight to Hawaii. Her distraught owners thought she had been stolen, but no sooner did Bethany land in Honolulu than she was placed in veterinary care and her owners informed of the mixup.

The Connemara Coast Hotel (connemaracoasthotel.ie) has a two-night post-Christmas B&B deal including dinner for €135 per person sharing. Children under four stay for free. The offer is valid from December 27th to January 3rd. Castle Leslie (castleleslie.com) in Co Monaghan has a two-night B&B winter special that includes a bottle of bubbly and chocolate for €175 per person sharing in the castle or €155pps in the Lodge. It’s a midweek offer valid until the end of January.
The Rosegarland Estate (rosegarlandestate.ie) in Wellingtonbridge, Co Wexford has three-nights in a two-bedroom cottage for €400, valid weekends until December 27th.

STAY Hotel Una (55-56 Regency Sq; hotel-una.co.uk; double from £110). 19 beautifully decorated rooms, including a two-room split-level suite with its own cinema.