The Spanish city is famed for its temperate climate, good food – it is the home of paella – and Calatrava’s City of Arts and Sciences 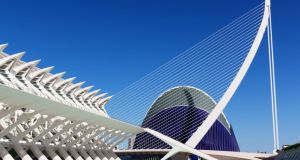 The City of Arts and Sciences designed by Santiago Calatrava 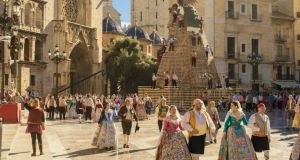 The festival of Fallas Valencia in 2014 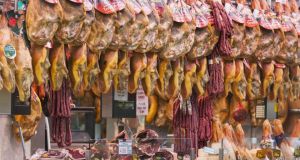 Nowhere has fortune favoured the brave more than in Valencia. The 2,000-year-old city, one of Spain’s oldest, was founded by retiring Roman soldiers given land by Caesar as a reward for their bravery.

With the best weather in Spain, and less crowds than you’ll find in Barcelona to the north or Alicante to the south, it still rewards visitors today

1. Amazing weather
Which brings us to Valencia’s weather. There’s a reason why those canny old soldiers opted to retire here, the Florida of its day. Valencia has arguably the best weather in Spain, with 300 days of sunshine a year and temperatures that range from an average of 25 degrees in its hottest month, August, to a manageable average of nine degrees in January.

That said, you can expect to find yourself in a T-shirt any month of the year here. And, of course, being on the Med, the sea temperatures are pretty nice too.

2. Brilliant beaches
Though it’s usually seen as a city break option, Valencia has terrific beaches for those looking for a more traditional fly and flop holiday.

Closest to the city, and just minutes away by bus, tram or car, are the beaches at Arenas, with seven kilometres of cabanas, sun shades and loungers and backed by a lively prom with shops and restaurants.

Head north and you’ll find La Malvarorrsa beach, which should surely be renamed Benvarossa because its size and fine sand make it a real gem. Just beyond the city you’ll find wilder beaches such as La Garrofera, 15km outside the city.

Like many of the beaches around here, what’s most striking is how undeveloped they are, especially when compared with their Costa del Sol counterparts.

3. Fantastic fallas
Valencia’s world famous fiesta takes place from March 14th to 19th, with festivities dominated by giant wooden effigies called ninots made by various neighbourhoods, or ‘fallas’. In all they cost up to €20 million to build, which is something to ponder as you see them all set alight after being paraded through streets. If you can’t be there then – and with half a million visitors in town for the festivities, accommodation books out years in advance – you can always visit for Valencia day on October 9th, to see the townsfolk parade through the streets again, this time dressed as Moors. Or just go to the Fallas Museum instead, open Monday to Saturday year round.

4. Ancient atmosphere
The gates may be all that are left of the town’s 14th century defensive walls, but what a souvenir. Towering over the entrance to the city’s historic centre, they set the tone perfectly for the beautiful Plaza de Virgen, a pedestrian square just behind them. Its centrepiece is a fountain surrounded by eight women, representing the eight irrigation channels that have brought water to the city since Roman times.

One side of the square has cafes and restaurants while the other is dominated by a stunning if somewhat confused cathedral. The architect couldn’t decide between Romanesque, baroque or gothic style so just used all three.

Come on a Thursday at noon and you’ll see the Water Tribunal in session, where local farmers come to get irrigation issues adjudicated on, just as they have for more than 1,000 years.

5. Fabulous fartons
You’d have to be very immature to find the name of Valencia’s signature dish funny, but you’d be the only one laughing if you ordered a farton.

Everyone else is too busy stuffing their faces with these sausage shaped confections that you eat only after dunking in horchata, the city’s signature drink made of tiger nuts. A surprisingly tasty cold drink not unlike sweetened milk, it is reputed to have all sorts of health benefits, and even if it doesn’t, it’s the perfect way to cool down on hot days.

6. Great wildlife
Take the Number 25 bus from the city centre and within minutes you’ll be transported into the wilds of Albufera Natural Park, home to the largest lake in Spain and one of the most important wetland areas on the whole Iberian peninsula.

Locals have fished here for generations, although mainly for eels. Today visitors can take utterly relaxing boat trips across the lake and feel a million miles from civilisation – but still within reach of a terrific restaurant.

The lakeside village of El Palmar is where locals go for long and lazy Sunday afternoons.

7. Culinary classics
Valencians take their food seriously and so they should, with magnificent produce available from the wonderfully fertile (thank you Roman irrigation) surrounding lands. Sample them all under one roof at the magnificent Central Market, a cathedral to food just off Plaza de Virgen.

Under its elegant dome you’ll find 400 market stalls selling the freshest of ingredients as well as opportunities to sample local specialties including Paella – but only for lunch, only tourists order it for dinner – summery gazpacho and arros a banda – a rice, fish and sweet potato dish.

You’ll also be able to pick up bottles of delicious but lethal agua de Valencia. The fresh orange juice base is so good it hides the gin, vodka and cava lurking beneath. You never know you’ve had one too many till you try to stand up.

There are great restaurants too, including cutting edge offerings such as La Salita, whose chef won Spain’s professional MasterChef, more traditional options such as Palacio de la Bellota, and hopping joints such as Las Lunas, set up by former hotel staff who lost their job in the downturn and who are now cooking up a storm.

8. Laid-back nightlife
Few places are as convivial as Valencia by night. No doubt the fact that it’s a student town has a lot to do with that. Of the 70,000 students here, around 4,000 are Erasmus students from overseas. In fact, it’s the most visited city under the international student programme.

Then again, maybe it’s the agua de Valencia. Find out for yourself at fabulous bars such as the magnificent Cafe de las Horas or its little sister, the new Laboratorio bar, in the historic city centre, or in clubs such as Upper Club.

Located on the Gran Vía del Marqués del Turia, in the posh part of town, this club has staff so good looking you know all they had to do was send a selfie and the job was theirs.

9. Cool Calatrava
Architect Santiago Calatrava transformed the port end of the city with his space age City of Arts and Sciences complex.

Iconic though it may be, not everyone was happy with the seven building complex. It has seen complaints – and even legal action – over the durability of some of the masonry work.

On top of this has been general grumbling about spending on white edifices rather than on education or healthcare while in the grip of recession.

On the plus side, the buildings certainly helped put previously overlooked Valencia on the international tourism map, not just for their design but for housing great visitor attractions such as a fantastic aquarium and science museum as well.

10. A river runs through it
The most wonderful feature of Valencia is the city centre park that runs right through it. Snaking through the city over nine kilometres, it’s a long green lung that came about when, in the 1950s, the River Turia flooded once too often and was diverted away from the city.

Dictator General Franco – not a man to be trifled with – wanted to turn the site into a motorway, but the locals drew on their inner gladiator and objected, demanding a city park instead. Designed for locals, not tourists, it’s viewed – and used – by them as their front garden. Once again fortune favoured the brave.

Do you smoke or vape? Here’s why Covid-19 means you should quit right now
5

Coronavirus: Will tenants have to prove they can’t pay rent?
7