The Bahamas: a tale of two islands 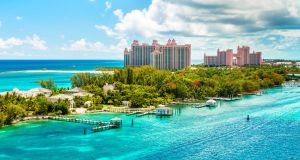 The Atlantis beach resort at Nassau, The Bahamas. Photograph: Getty 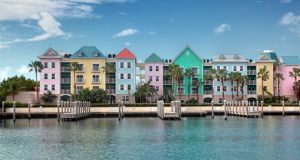 Colourful condominiums in the capital of New Providence, Nassau, The Bahamas. Photograph: Getty

‘The pilot told me this is bad – says it’s the worst he’s experienced in four years.” The air hostess is talking about the storm outside, the one that’s making our plane bounce around the sky. The man next to me is praying, he’s been praying for 20 minutes and he won’t stop for the hour-long journey.

I’m en route to the island of New Providence, and its capital Nassau, the epicentre of a cluster of 16 main islands and over 700 cays and islets that are collectively known as The Bahamas. The initial nine-hour direct flight from London turned into a 25-hour marathon after an overbooked aircraft. The detour has delivered me to the eye of the storm – via Miami.

On arriving in Nassau I head to the Atlantis resort on Paradise Island, which will be my home for four days. A steep cement bridge takes me towards the sky, cruise ships bob in the sea below, then it’s a sharp descent to Atlantis. A cluster of orange dots and lit arches dominates the horizon.

Among many, many, other things, Atlantis has five hotels, 21 restaurants, 19 bars, an aquarium, gym, water park and a casino. Themed on Plato’s doomed state, this American playground is all things to all men, women and children – and its scale is staggering.

Walking from one end of the resort to the other can take 30 minutes. The journey is anything but boring. White-sand beaches and pools nestle beside the sandstone structures, guests kiss the resident dolphins for photos, and a spiralling aquarium, with 20,000 deep-reef and pelagic fish on show, lies below the staircase at the Royal Tower hotel. It’s pretty impressive, and a little daunting.

One of the more exclusive haunts is the afternoon beachside bar, Cain. Bolted on the side of the more expensive Cove hotel, only Cove residents need apply. Being a lowly resident of The Reef, I’m persona non grata but as it’s 30 minutes from closing time and I’ve promised the “guard” that’ll I’ll only have one drink, I get access. I look onto a faux MTV party, or a warped spring break in Cancun, sipping my $10 can of beer. Everyone is over 30, American, swigging cocktails, gambling poolside and dancing badly along to hip-hop tracks that a DJ is playing through huge speakers.

Later in the evening it’s time for blackjack or, in my case, something cheaper. I position myself at an electronic roulette machine; one with a $5, not $50, minimum bet. After an hour placing minuscule bets I accumulate winnings of $30. “I know it’s pathetic, but I thought I’d stop while I’m up,” I say to the cashier. She shrugs and passes me my bounty. As I walk away an American 20-something guy runs up to his friend who’s stood near me. An aggressive high-five follows: “Woooo! I just won 30 grand!”, “No way man!” his friend replies, “I just won 25K.” They high five again and hug.

Resorts in the Bahamas are big business. They hit the height of extravagance at a resort called the Albany in Nassau. Spread across 600 acres and frequented by golfers and celebrities, it’s famous for being where Daniel Craig’s Bond walked out of the sea in his little blue shorts. Accommodation ranges from $1,100 to $3,700 (€999,155-€3,360) a night, or you can buy a villa from $7.4 million.

Elsewhere on the island you have the historical Graycliff, a cosy retreat for the rich and famous. It has 275,000 bottles of wine in the cellar worth around $22 million. Bill Clinton once owned a cigar bought there.

In the evening it’s time to experience real Bahamian culture, in the form of Junkanoo Carnival. Not to be mixed up with Junkanoo, a street parade with costumes, music and dance which takes place over Christmas each year. This new mid-year celebration carbon copy is in its infancy; critics say its sole purpose is to help lure holidaymakers to the island during low tourist season.

The opening gambit is a concert headlined by none other than Wyclef Jean of Fugees fame. Being from Haiti he’s not a resident, a lot of the other acts aren’t Bahamians either – a matter of contention for a lot of the locals here. Pencilled in for only an hour, Wyclef refuses to leave, staying on stage for two hours. Being thin on material he takes to rapping/talking over songs he’s produced, such as Shakira’s Hips Don’t Lie. Everything about this says it shouldn’t work, and it doesn’t.

Taking a break from the festivities we sit on the beach. It’s lined with shacks serving cold beer and local food such as conch salad – raw diced sea snail mixed with a salsa. It’s as far away from the resort lifestyle as you can get, but we’re about to get even further away.

At 128km long and 6km wide, Long Island is one of the more “rural” islands of the bunch, and only a 30-minute flight from Nassau. The airport is no more than three huts. There’s no security or customs, and a taxi picks us up 10m from the runway.

The short journey on a hedge-lined dirt track leads us to the 3-star Stella Maris resort, less than five minutes from the airport. It is trapped in time. Traditional Caribbean colours, patterned fabrics, a wooden bar with bamboo chairs. After checking in I ask for the room key, to which the receptionist replies: “We’re on an island, we don’t need locks.” Unsurprisingly the rooms don’t have wifi.

Traditionally known for its scenery and collection of vistas, Long Island has had a hard time lately. Hurricane Joaquin devastated it in October 2015. The fiercer than usual visitor from the annual hurricane season (June-November) battered sea-front hotels and tore up roads. The scars are still visible but may not be there for long: rebuilding and expansion can be seen all over the island.

We head to the west of the island for a fishing trip. Our skipper, Robert, will teach us to catch our dinner. We cast our lines into the Caribbean Sea only to come up short. Robert says, we’re, “feeding the fishes” with our bait, while laughing at our numerous pathetic attempts to hook snapper.

Back at Stella Maris we head to the pool and beach-side bar for moonshine cocktails and local music. Fresh from dropping us off at the harbour after four hours of fishing, Robert turns up. He’s in the “rake ‘n’ scrape” band we’re about to watch.

Along with the rest of the band he runs a Phillips screwdriver against the teeth of the saw, creating a unique sound that could only work against the backdrop of the Atlantic. Other band members include Robert’s son and his old headmaster. With only 3,024 islanders, it’s always a case of six degrees of separation on Long Island.

The next day we have an island tour. Lily is our guide. She is Robert’s daughter-in-law. One of the island’s famous destinations is Dean’s Blue Hole, at 202m the deepest known saltwater hole in the world. Snorkellers swim across the ridge of the abyss; fish and coral litter the seabed before they disappear into nothingness.

Looking out into the horizon there’s not a cloud in the sky. The storm that delivered me seems to belong to another dimension, just the way that Long Island is a distant sort of paradise to Nassau.

HOW TO... LONG ISLAND AND PARADISE ISLAND

Welcome to my Place ... Leiden, The Netherlands
6