Ernest Hemingway is Key West, Florida’s, most famous literary son and when they celebrate his legacy they do it in style 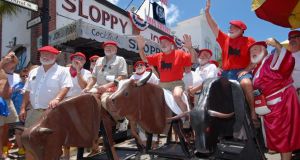 The Running of the Bulls, a highlight of the Hemingway Days Festival in Key West 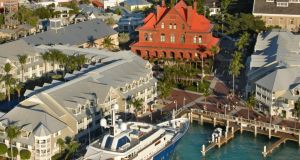 There’s a touch of voodoo about Key West, this subtropical island basking at the foot of Florida. It’s famously closer to Havana than Miami, but stepping off my bus I know I’m deep in the heart of America. Facing me is Sloppy Joe’s bar, the anchor to my four days in this town so associated with Hemingway. Chickens wander freely in the streets and at this early hour my only companions are slow-moving families.

Key West is a party town and is the location of America’s best-known literary festival – or at least the most fun. The Irish throw literary parties more frequently than most but I don’t believe any of our get-togethers quicken the pulse quite like Key West’s festival, Hemingway Days.

Ernest Hemingway stumbled on Key West by accident, arriving there from Havana to pick up a new car in 1928. The car was late and so the writer was put up in an apartment above the car dealership to wait for it.

Its arrival took just long enough for the town to weave its spell and, like many who testify to have washed up there, a decade quickly passed and Hemingway and Key West were like brother and sister.

He finished Death in the Afternoon there, For Whom the Bell Tolls, The Snows of Kilimanjaro and The Short Happy Life of Francis Macomber. He also put the town firmly in the mind’s eye when a Depression-era Key West took centre stage in his novel To Have and Have Not – although the film of the same name was changed considerably from Hemingway’s original, writing Key West literally out of the picture. Thankfully, Key West didn’t repay the favour and Hemingway’s place in the town is as prominent today as ever.

The streets come alive from early afternoon. Most bars bring on live music a little after 4pm and the party runs until the early hours. Sloppy Joe’s is the busiest of them all and by late afternoon things there are heating up. The main bar is stuffed with families and supporters of an army of Hemingway lookalikes. It’s 30 degrees outside and the cool air and fast-flowing beer inside has chilled everyone out – but temperatures are rising. In a place where everyone is trying to look the same, the trick, it seems, is to stand out. Families and friends are handing out T-shirts, flyers and badges celebrating their favourite contestant and as every wannabe Papa wanders past, friendly banter and rivalry charges the room. It’s the early stages of the contest and everyone is trying to make the final.

With a lookalike contest at its heart, Hemingway Days can never be accused of taking itself too seriously. It shouldn’t be a surprise that this contest has become the loudest part of the festival – America has always appreciated a trier in a way that other countries simply can’t grasp. Everyone knows that looking like a writer can hardly be the same as being that writer, but watching the contestants line up to take the stage in Sloppy Joe’s is fascinating. White hair and beards, fishermen sweaters, flat caps – it’s a beauty pageant like none other.

The judges are a powerful group of past winners – the Papas – who gather each year to select the next member of their elite group. Each Hemingway wannabe has a short speech prepared designed to pull a vote their way, to get them through the heats and into the finals.

Some sing, some plead and some tell a joke, while one admitted that a win would secure him a great night in with his wife – or in supposed Hemingway fashion someone else’s wife (Hemingway was married four times). This got him a cheer from the crowd but it takes more than bravado to win. The heats last for two days and the day of the final culminates in a mock running of the bulls through Key West as well as the triumphant announcement of the winner – in this case it turns out to be Greg Fawcett of North Carolina who, in his 10th year trying, finally stole the prize.

Behind this very public facade the literary side of the festival is also in full swing. I wander along Duval Street to a local gallery to one of the headline events. Crime writer Michael Haskins is giving a reading from his latest Mick Murphy crime novel, Car Wash Blues. His books, set in and around the Florida Keys, reveal a side of the keys we’ll never meet but is vivid and alive in Haskins’ story telling.

Key West is a magnet for creative people, its beautiful wooden architecture framing new lives for countless artists, writers and musicians. Over at the Tropic Cinema, Brian Gordon Sinclair has taken over the main auditorium with his latest take on the Hemingway story, In Deadly Ernest. Sinclair is a Canadian playwright with Irish citizenship who has found his life rapidly entwined with Hemingway’s story. Through this play and his five-part series on the life of the writer, Sinclair has become a renowned authority on the Hemingway story and its place in the literary world. His portrayal is exciting and real and the audience, in true North American fashion, cheer and laugh in equal measure – a much more confident audience than we’re used to at home.

Nearby is 907 Whitehead Street, Hemingway’s home. It’s a museum now and the tours that take place there bring you face-to-face with this literary landmark. His writing studio, his living areas, the fantastic outdoor pool and even the living descendants of his famous six-toed cat. The house is a national historic landmark and well worth visiting. But it’s not the only property that bears his legacy.

Lorian Hemingway is Ernest’s granddaughter and over the past 10 years she has developed what has become one of the more important short story competitions in the US, with more than 1,300 entries from around the world. On the last night of the festival, we gather in Hemingway’s first port of call, Casa Antigua on Simonton Street, to announce the winner. Long converted from a garage with apartments above to a private home, it’s now a landmark building with spectacular atrium gardens and we’re privileged to visit. Hemingway’s bedroom is preserved and protected on the first floor and the gardens are open to visitors. Now in its 33rd year, last year’s honourable mentions included two Irish writers, Patrick McCusker from Wicklow and Damien de Burca from Dublin. It’s exciting to be there for the announcement. There’s an energy in this beautiful house that matches the event, and a reading from the winning story captures the sense of importance in the written word.

Despite its bawdy personality, Key West is fantastic for families. It’s surrounded by the Atlantic ocean and the Gulf of Mexico with the point at which the two bodies of water meet being the Florida Straits. The waters here are renowned for their sea life and there are many great and safe trips to be taken. Fury Water Adventures took me out into the Gulf of Mexico on a dolphin safari, followed by a great snorkelling session in the Key West wildlife refuge.

Back on land, the Key West Butterfly and Nature Conservatory is a beautiful experience with its glass house full of hundreds of tropical butterflies that flutter around and alight on your hands and feet. You can learn about the journey a butterfly makes from cocoon to adult butterfly and get up close and personal with these delicate insects – just make sure there aren’t any hitching a ride when you leave.

Families will also love the aquarium, the Shipwreck Museum, the Eco-Discovery Centre and of course the Sunset Celebration – a nightly event at Mallory Square in the old town to watch the sun slip slowly into the sea surrounded by fire eaters, jugglers and musicians.

Key West has lots of accommodation of all types – historic guest houses, bed & breakfasts and five-star resorts. Many located on historic Duval Street itself as well as on the coast. The Doubletree Hilton, where I stayed, is a great resort for families, particularly as it’s not in the old town so it’s quieter and has a great pool.

Want to buy a fixer-upper? Here are five things to consider first
4

‘He was some man’: Shane’s journey from care child to fearless activist
8