A taste of Washington and Baltimore 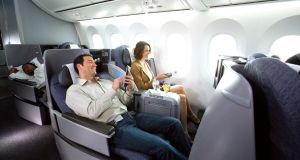 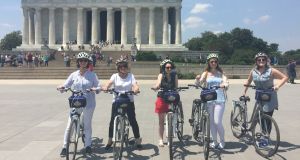 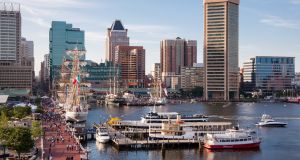 Baltimore: just an hour away from Washington and an ideal second venue for a short break in DC and Maryland. 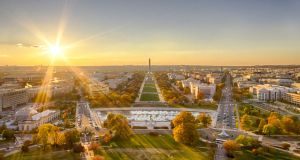 Washington DC: sights include the National Mall, Capitol Hill, the Supreme Court, the many Smithsonian Museums, the World War II Memorial and the Washington Monument.

Balls, bats, beer and bikes. None of the aforementioned have ever featured in my travel plans. That is, until I visited Washington DC and Baltimore, to see what could be packed into a long weekend in the area. Sitting submerged in a sea of red baseball jerseys watching the Washington Nationals and the St Louis Cardinals slug it out, with barbecue smoke and the tantalising smell of very superior hot dogs in the air, I began to realise what I’ve been missing.

The crowd – there was a 30,781 paid attendance according to the mesmerising giant scoreboard – were amiable: there were lots of kids, and bizarrely, dogs too. It was Pups in the Park night, a fundraiser for the Washington Humane Society, and the atmosphere was electric as the giant stadium glowed under mega-watt lights in the early evening heat haze, the kids waved giant foam fingers and the dogs wondered what the hell was going on.

“Nats” star Bryce Harper, the player touted as being likely to get the first half-a-billion-dollars contract in American sports history – was the big draw on the night, and every night at Nationals Park stadium. But despite the bearded wonder’s heroics on the pitch, it wasn’t the Nats’ night, and there was nothing for it but to seek solace in a chilli half-smoke.

Pepe, the food truck operated by Washington’s original celebrity chef José Andrés (two accents) sadly wasn’t in attendance, so this was the consolation prize – a pork-and-beef smoked sausage dowsed in chili, from Ben’s Chili Bowl, a favourite of President Barack Obama’s and conveniently with an outlet in the stadium.

And the beer . . . No I haven’t overcome a lifetime’s indifference to it, despite the best efforts of my craft beer-loving friends. But myself and the other “senior” did find ourselves buying beer chasers for our white wine when some of our party were refused bar service as they didn’t have ID with them. Youthful, yes, but first flush they were not, so DC’s often strictly enforced legal drinking age of 21 is something to remember when heading out, if you’re lucky enough to look that young.

The baseball season runs April to October and tickets are from $26, see washington.nationals.mlb.com, and though it didn’t make me a baseball convert, it was a thoroughly enjoyable evening. And that’s coming from someone who gave far too much thought space to trying initially to wriggle out of this appointment.

Keeping mostly to off-road paths around National Mall and Capitol Hill, we wound our way past Capitol Building, the Supreme Court, the many Smithsonian Museums, the World War II Memorial and the Washington Monument, stopping regularly for fascinating insights and background information. The three-hour tour covers about 12km of easy cycling and costs $40, with helmets provided(bikeandrolldr.com). It’s a brilliant way to get your bearings in the city as well as plan where you’d like to return to visit in more detail.

Despite having just 24 hours to spend there, it went straight to the top of the travel alphabet for us, scoring an A-plus for its visitor attractions including superb food, excellent hotels, a thriving arts scene and some stunning architectural features.

The historic neighbourhoods of Fell’s Point, a shopping and dining hub on the waterfront, and Mount Vernon, with its glorious Mount Vernon Place urban square and Baltimore’s Washington monument, are great places to explore. Fell’s Point is the city’s pub and restaurant epicentre, while up in Mount Vernon you can also eat and drink well, mostly on Charles Street, while taking in the well-preserved 19th-century architecture and the stately red-brick-row homes.

History is brought to life across the harbour at Fort McHenry, a national park at Locus Point, where you can learn about the origins of the Star Spangled Banner, while taking part in a moving unrolling or changing of the flag ceremony, to mark the fort’s successful defence of Baltimore against the British fleet, which had already captured Washington, in 1814.

The museum also has an excellent shop, so the many temptations there, combined with a swift pitstop at the outlets centre at National Harbor, on the way back to Dulles airport, meant that United Airway’s generous 23kg baggage allowance (32kg in BusinessFirst) was fully exploited on our return. The airline flies direct from Dublin to Washington Dulles airport year round (except January 10th-March 1st, 2017), making a short break in the region easy to organise and something a bit different from the usual Ireland-US routes. November/December fares start at €474 (including taxes) in economy and €1,840 in BusinessFirst.

Where to eat and sleep: Washington

Commissary DC, 1443 P St, Washington DC (commissarydc.com): Breakfast tacos – what a way to fuel for a busy day’s sightseeing, and at neighbourhood joint Commissary they are top-notch. Eggs, chorizo, feta, Pico de Gallo, guacamole, sour cream, salsa and home fries for $14. All day dining and drinking spot that will give your pocket a break.

Where to eat and sleep: Baltimore

Cosima, 3000 Falls Road, Baltimore (cosimamill1.com): Who would have thought that an old sailcloth factory on the outskirts of Baltimore would be where to find some of the best Sicilian food outside of Palermo? Donna Crivello and Alan Hirsch have just opened this impressive venue where Crivello is cooking the food of her nonna. Arancini with smoked mozzarella and Sicilian pesto; ricotta-stuffed aubergines, spit-roast chicken with a rosemary orange glaze, and a masterful chocolate hazelnut torte were highlights.

Gunther & Co, 3650 Toone Street, Baltimore (eatatgunther.com): Another new opening, and another impressive restaurant. A former beer factory has been transformed with great flair into a vast but not cavernous space. Weekend brunch is a lavish affair, washed down with a Bye Bye Missy cocktail – a pimped bloody Mary made with Alaska smoked-salmon vodka, garnished with Gunther cured salmon on a bagel chip.

Hotel Indigo, 24W Franklin Street, Baltimore (ihg.com/hotelindigo). Quirky hotel with masses of character in the heart of the cultural and culinary hotspot of Mount Vernon. Doubles from $139, but expect to pay more, and book well in advance, at weekends.

For further information on visiting Washington DC and Maryland