Artist Fergal McCarthy on why, over the past few months, he has been imagining an escape to this hideaway on Lough Corrib 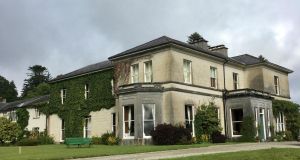 Currarevagh House in Oughterard, Connemara, Co Galway has been open to guests for 130 years, making it the longest-running hotel in Ireland owned by the same family

There is a house in the west of Ireland on the shore of Lough Corrib that has stayed with me since I first visited last summer. During the long months of lockdown I often imagined escaping to Currarevagh House near Oughterard in Co Galway and the mind-expanding view across the Republic’s largest lake. There are many extraordinary places to rest your head in Ireland, but this hideaway has something more.

As you drive up Currarevagh’s overgrown, dark avenue, the rest of the world somehow fades until the colossal vista of the lake is slowly revealed behind the trees. No amount of meditation could compete with the peace this amount of water can offer. The house also seems dark on arrival, like a theatre before a show, until the owner Henry Hodgson unexpectedly pops up from behind a well-stocked bar, illuminating the stately rooms with his warm smile.

Hodgson grew up here; he has a sparkle in his eye that seems to will you on to enjoy Currarevagh as much as he clearly does and to fully embrace all it has to offer. Our room looks out to the Hill of Doon but I have a feeling that I won’t be straying that far during my stay.

We play tag on the lawn after dinner, with bats and swallows circling overhead

I tramp with my young son through the verdant grounds before finding a red-and-white boathouse and a jetty which calls out for a swim. It feels like we’ve been transported to Sweden’s lakelands. Multiple islands lie across the horizon. For me, at least, this is heaven.

A gong rings for dinner and I manage to coax my wife away from her book and our enormous bedroom. Downstairs, another theatre set awaits that comes alive with the careful attention of the mother-and-daughter team that serves up the best food I’ve ever eaten in a hotel, anywhere. Henry’s wife Lucy conjures up plate after plate of deliciousness; she’s one of those gifted cooks that can alchemise foods you don’t especially care for (such as venison) into the most extraordinary thing you’ve ever tasted. A happy hum descends on the room which crescendoes when Henry appears with a giant silver platter of extra helpings. We play tag on the lawn after dinner, with bats and swallows circling overhead.

The silver platter makes a reappearance the next morning at breakfast studded with fried eggs and bacon. Henry’s mother, June, appears, with a smile to rival her son’s, brandishing what looks like a science set but instead turns out to be an ingenious Cona coffee pot. A lit glass lamp filled with purple methylated spirits keeps our coffee warm as we try desperately not to polish off the entire platter of food.

A well-used picnic box awaits us in the hallway topped with firelighters, a blackened kettle and matches. Henry calmly explains how to use an outboard engine and waves us off on one of his wooden clinker boats for a day of island-hopping on the lake. My 10-year-old son, Dash, grabs the tiller and steers us towards Inchagoill island in the distance. The monastic ruins have to wait as we make a fire on the shore and boil the kettle for arguably our best-ever cup of tea. We have the island to ourselves for a few hours until it’s time to return. The wind has picked up, the quiet lake is suddenly a mass of mutinous waves akin to those on the Shannon in the last paragraph of Joyce’s story The Dead. Dash gladly hands over the tiller. I steer the boat at a 45-degree angle to the wind. I know little about boats and have no idea where this innate wisdom has come from, but it works and, after 10 minutes, the drama subsides and the calm bay in front of Currarevagh comes into view.

I’m not sure how we can still be hungry after our box of sandwiches and cakes on the island, but we arrive back just in time for more cake and tea in the sittingroom at four o’clock. The star of this show isn’t the tiers of homemade cakes and biscuits, but instead it’s June. She brings the past alive as she explains how Currarevagh has been open to guests for 130 years, making it the longest-running hotel in Ireland owned by the same family. Many decades ago a dedicated train carriage would leave London bound for Currarevagh, such was its fame for fishing. The guests would sleep as their carriage was rolled onto the boat for Ireland and awaken as the train sped west for Connemara. June brings us back to the present with the offer of another slice of cake.

Dash finds an old chess set and we take over the lounge briefly, both of us imagining what it would be like to live here. The beauty of this place is that it doesn’t feel like a hotel. Before long the gong rings again and it’s time for dinner. Often the thought of eating dinner for a second night in a row in a hotel would fill us with dread, but not here. Lucy performs her magic again and a room full of diners pray that they’ll never have to go home.

We have great plans to hike some of the Western Way during our stay, to climb the Hill of Doon, to buy a basket from Joe Hogan at nearby Loch na Fooey and to venture out for a pint at ivy-covered Keane’s Bar at Maum Bridge. None of this happens. Currarevagh is a kingdom unto its own and there’s really no need to leave until you really do regretfully have to leave and then drive out the avenue and back into the world.

Now that the world has changed, Currarevagh has changed with it; the family have reopened the hotel post-lockdown with measures in place to ensure their guests’ safety. They are operating at reduced capacity to make more space for everybody, which isn’t altogether difficult with a very large house, 130 acres of grounds and an enormous lake. A picnic on a deserted island is surely the ultimate socially distanced activity. The Hodgsons and their team will care for you like one of their own and wrap you up in the warmth of their house and grounds. I know where I’m going on holiday next.