Heritage Week: With staycations the norm, it’s a perfect time to appreciate the best in our villages and towns 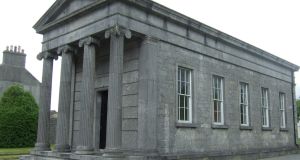 Often, we take for granted the architectural gems that are close by. But, with more people holidaying in Ireland this summer, it’s a perfect time to discover – or rediscover – buildings of interest in our villages, towns and cities.

And, it’s not just visitors who can appreciate Ireland’s architectural heritage but local people too can also learn more about what’s on their doorsteps with audio guides, downloadable online maps and signed heritage trails. Here, we offer a sample of places worth exploring .

The Boyne Valley which straddles counties Meath and Louth has some stunning places to explore via a series of downloadable heritage trail maps. For example, the medieval town of Trim is home to Ireland’s largest Norman castle.

Nearby Kells has five Celtic High Crosses, Ireland’s only inland lighthouse and a former courthouse designed by Francis Johnston who was the architect of the General Post Office in Dublin.

The village of Slane is a beautiful example of 18th century architecture with its stately Slane Castle and townhouses on its main crossroad.

And Drogheda at the mouth of the Boyne has an impressive medieval town gatehouse, many 18th and 19th century buildings and the Boyne viaduct, designed by Irish railway engineer Sir John Benjamin MacNeill.

Heritage trails and maps can be downloaded athttp://www.discoverboynevalley.ie/download-brochures-about-boyne-valleyand some are also available in French, Italian, German, Spanish and Chinese.

This sometimes neglected city in the South East is Ireland’s oldest city. Its Viking heritage can be explored in the medieval museum and the King of the Vikings virtual reality experience within a replica of a Viking house.

The influence of the Normans can be seen at Reginald’s Tower, the city walls and medieval churches such as Greyfriars. Both the Church of Ireland and Catholic Cathedrals were designed by John Roberts during the Georgian Era.

And for those with a car, the village of Cappoquin on the Blackwater River is one of Ireland’s best kept secrets. Its Georgian streetscape was built by the Keane family, owners of Cappoquin House which overlooks the town.

Barrons Bakery, one of Ireland’s oldest bakeries is a must-stop for tasty homemade breads and cakes. A map of Waterford City with its architectural highlights is downloadable on http://www.waterfordcouncil.ie/media/heritage/architecturalwaterford.pdf

Known as the crossroads of Munster, Kilmallock was an important Norman town at the centre of Ireland’s political developments from the 13th Century through to the 17th Century.

One of Ireland’s finest walled towns, visitors can enjoy the West Wall walkway through a public park on the outside of the medieval town wall and the East Wall walk along the banks of the Loobagh River.

Kilmallock also has a rich ecclesiastical heritage which includes the Collegiate Church of St Peter and Paul and the 13th Century Dominican Abbey which is the best preserved of its kind in Ireland.

The 15th Century King’s Castle is in the centre of this town which now serves as a hub for the popular Ballyhoura region with lopped cycling routes taking between one and five hours to complete. You can follow an audio guide https://www.abartaheritage.ie/product/kilmallocks-medieval-marvels-audio-guide/The Co Cork town of Buttervant, about 25 minutes drive South from Killmallock is also worth a visit. With two castles, a 13th Century Franciscan Friary and abbey, the medieval walled town has plenty to offer. See https://buttevantheritage.ie/audio-guides/

The East Galway town of Athenry is one of the best preserved medieval towns in Ireland with over 70 per cent of its town walls surviving. These included an arched gateway, five defensive towers and the surrounding ditch or fosse.

The heritage buildings in the town –- which is 17km east of Galway city – include a restored Anglo-Norman castle, the ruins of a Dominican priory, a rare late medieval cross and the remains of the 13th Century St Mary’s Collegiate Church. Visitors can take self-guided walking tours, using maps and audio files downloadable from https://www.athenryheritagecentre.com/index.php/activities/historical-walking-tours

There are details of architectural walking tours of Athenry, Loughrea, Portuma, Gort, Ballinasloe and Tuam as well as maps and audio guides for the East Galway ecclesiastical trail by car on

One of the most attractive small towns in Leinster, Abbeyleix is a planned estate town built in the 1770s by the local landlord, Viscount De Vesi to replace an older low-lying town on marshy land near the River Nore.

Its finest architectural features include the Pembroke Terrace of town houses, a market square with restored Market House (which now houses the public library) and a series of beautifully ornate fountains.

The Abbeyleix Bog Project to the south of the town is a great example of a bog under restoration with 150 hectares of different habitat in wetlands, woodlands and meadows. Details of local walks on abbeyleixheritage.com and abbeyleixbog.ieAn audio guide to the town is available on https://soundcloud.com/laois-heritage/sets/abbeyleix-heritage-town

Best known for its medieval-style castle with extensive gardens and 19th century telescope, Birr is one of the finest Georgian towns in the midlands.

Follow one of the town trails or river walks to discover the elegant Oxmantown Mall with the entrance gates to Birr Castle at the eastern end and St Brendan’s Church of Ireland church at the west.

Midway along is Oxmantown Hall, an Elizabethan-style concert hall and theatre built in 1888, now home to Birr Theatre and Arts Centre. There is also an impressive terrace of Georgian houses on John’s Mall, next to John’s Hall, a beautiful Doric temple built by the 2nd Earl of Rosse as a mechanics institute to commemorate the death of his 26-year-old son. Also worth a visit is the 19th Century Gothic Revival building which now houses Birr civic offices and public library. The town also has pleasant cycle path and walkways including a riverside walk onto and off Mill Island.

There are plenty of ways of exploring the architecture of Dublin with guide books and apps but one of the guided walking tours which pays particular attention to the architectural and historical features is Dublin Decoded. Led by Arran Henderson, the tours for small private groups of up to 10 people are now back up and running. See dublindecoded.com for details.

You can also take a self-guided walking tour of the medieval city walls with great detail on monuments and buildings on your route by downloading the map on http://www.dublincity.ie/sites/default/files/content/SiteCollectionDocuments/walks_through_medieval_dublin.pdf.Also, the Dublin City Walls free app contains audio, 3-d videos, photographs and synopsis of existing and lost features of the medieval city walls.

https://apps.apple.com/ie/app/dublin-walls/id416432700And, did you know that you can scan a QR code on the side of many Dublin statues which will result in you getting a call back from a speaking statue. http://www.talkingstatuesdublin.ie/Finally, you can learn about local historic gems by watching stories told by locals on storymap.ie