Is it too early to get the BBQ started?

Cooking with fire is one of the greatest pleasures 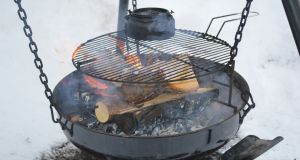 Don’t restrict yourself to meat or fish, try cooking a carrot or a leek over fire.

Cooking with fire is in our genes. That is, according to Victor Arguinzoniz, owner of Asador Etxebarri, a Spanish restaurant in Atxondo, in the Basque Country, Spain. Arguinzoniz cooks everything over fire, even his desserts. Of course, the ice-cream is not grilled over flame but rather the cream is smoked to flavour the resulting dessert. If you’re a fan of making ice-cream at home, this is a cool trick to try. Simply smoke the cream lightly in a small camping smoker with some oak chips. You can also use an old biscuit tin.

Arguinzoniz built himself different grills in order to cook his products more effectively, from oysters to prawns to chorizo. He even uses different woods with regard to the food stuff that he is cooking. He has inspired many “fire-restaurants” from London to Sydney.

We do a little in Aniar and Tartare with our Japanese grills, using some beautiful Irish oak charcoal. Is it the smell I love? Or the taste of the smoke scented food when I eat it? I can’t say. Whatever is it, cooking over fire transfixes me. Time slows down and sounds disperse. I and the object of cooking become one and until it’s cooked that’s all there is. It’s not only meat. Fish or vegetables are also amazing over an open flame.

Granted we all love a BBQ in the summer, but how many of us do our cooking over open flame in January? I don’t think it’s been too cold this year. Is it too early to get the BBQ started? Winter BBQs are a great thing as long as it’s not raining. Just make sure you’ve got some wood or charcoal as this will give your food that beautiful smoky flavour. Try a carrot or a leek or even a turnip. Don’t restrict yourself to meat or fish.

For Michael Pollan, writing in Cooked: A Natural History of Transformation (2013) cooking, particularly over fire, is what separates us from other animals. It is the foundation of so many things. Everything happened around the fire. Let’s continue to stoke the flame.