Time your visit to this mysterious tidal island with care 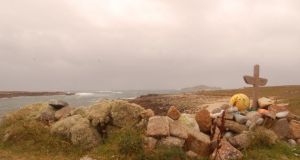 For years, Omey Island seemed a near-mythical place to me. Despite exploring much of the Connemara coast I had never been to this tidal island, which you can walk to at low water but which becomes cut off at high tide. Inishbofin, Inishark and Inishturk print their silhouettes indelibly on the western skyline, but Omey hides away under the Aughrus Peninsula.

You can cross the wide strand from Claddaghduff Quay to Omey around low water from roughly half-tide to half-tide. But tidal conditions vary each day, and with the weather, so ask in Sweeney’s shop and pub in Claddaghduff for local advice before setting out.

We crossed Omey Strand an hour before low tide one gusty October day, roughly following a route described in Paul Phelan’s book Connemara and Mayo: A Walking Guide (Collins Press, 2012). Rather than follow the signposts all the way over the strand, this route veers right towards a prominent house near the island’s northeastern corner.

As we crossed the beach, a hearse started out across the hard sands, followed by cars. The burial procession advanced slowly through the grey wind, bound for Omey’s graveyard.

As you reach Omey, turn right and follow the shore, passing the graveyard if you haven’t already. Ignore the sandy road leading inland towards the house and continue along the beach. You can now pick up a sandy track above the curving shoreline and follow the northern coast (no fence-hopping required).

You will come to one beach, then another. Where a fence turns inland above the second beach, follow it to the remains of Teampall Féichín. This medieval church was built on the site of an earlier monastic settlement founded by St Féichín. Omey’s Gaelic name is Iomaidh Féichín, the bed of Féichín.

Return to the beach and continue to follow the shore. This exposed corner of the island is called Guairín, meaning small dunes, according to Tim Robinson’s book Connemara: The Last Pool of Darkness, from which I have gleaned much of my information. It is mostly machair, a sandy grassland only found in western Ireland and Scotland. The grass is populated by snails that use the lime-rich sands to build their shells.

You will reach the island’s northwest corner, where there is another small tidal island offshore, and, further west, Cruagh Island. Follow the shore of Omey as it turns and heads southeast.

The wind was heavy and the sky grey – not a solid grey, but a fluid mass of moving shades and shapes. To the south, towards Slyne Head, the dim sunlight broke through in crepuscular rays. Keep the sea on your right until you come to a small bay. St Féichín’s well, where pilgrims have left strange trinkets, is above the shore here.

In 1841, Omey was home to 396 people; just 10 years later, after the Famine, this had almost halved. The island’s school closed in 1973, and today there is just one year-round resident.

Cross the beach, join the road by two mobile homes and go left, past the lake and back down to Omey Strand. Presuming you haven’t horribly miscalculated the tides, you can follow the posts back across the sand to Claddaghduff.

Start/finish: Claddaghduff Quay, Co Galway. The turn for Claddaghduff and Omey is about 3.5km north of Clifden on the N59. Turn at Claddaghduff church for the quay, or continue straight for Sweeney’s shop/pub.

Suitability: Easy to moderate walking. Head out well before low tide. Omey has no services.