Fancy trying yoga in a salt cave, or cuddling a puppy while holding downward-facing dog? 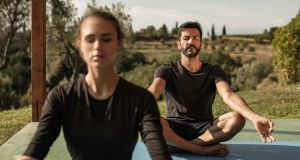 Ready to align your chakras? Yoga breaks are a surefire way of rebalancing the demands and stresses of everyday life. Their continuing popularity means that 2020 sees the broadest range of yoga holidays yet. Whether you like your sun salutations on the beach, fancy trying yoga in a salt cave, or like the idea of cuddling a puppy while holding downward-facing dog, there’s a yoga holiday with your name on it. Here’s our pick of the bunch.

Keen to be at one with nature? The Japanese practice of Shinrin-Yoku – soaking up the nature in a forest walk, or “forest bathing” to translate literally – is a complementary activity to yoga. It’s proven to reduce blood pressure and stress hormone levels, and increase the immune system too. At the Portuguese yoga retreat of Shamballa, guests are invited to join a three-hour sensory walk in Sintra’s National Park with a certified forest therapist (who knew…). That’s in addition to a week-long programme of yoga and meditation activities, and virtuous healthy meals, all within walking distance of Portugal’s coast.

Five nights including accommodation and meals from €600. shamballahretreats.com

Getting there: Direct flights from Cork and Dublin to Lisbon start from €44. Shamballa is a 40-minute transfer from Lisbon Airport.

High-aiming beginners and intermediates might be tempted by Burren Yoga’s yoga bootcamp weekend on January 31st. It’s where you’ll find a busy schedule of yoga and meditation classes, mixed in with a hike around the unique landscape of the Burren, and a little relaxation time to mentally exhale. It’s a nice chance to try out new forms of yoga (including yogalates and hot yoga), as well as take a step back from everyday life. Prepare to return a yoga expert.

For a no-expense-spared option for holistic yoga-ing, say namaste to Anse Chastanet, the St Lucian hideaway in the French-influenced area of Soufriere. The Ayurvedic Fusion package sees guests undertake activities right for their energy type. Once the Ayurvedic consultant has identified a guest’s “dosha” – it could be Vata, Pitta or Kapha – the guest will be drawn up a bespoke programme that includes specialised yoga, a cooking class in the beachside Indo-Caribbean restaurant, and a tailored treatment in the spa. For example, Vatas, who have the qualities of air, take a yin yoga and meditation session, an Ayurvedic cooking lesson concentrating on moisture-rich food, and a two-therapist, four-hands massage. The personalised intel can shape a holistic approach from thereon in – and let’s face it, it’s no hardship that it all begins surrounded by lush tropical jungle and the glorious Caribbean heat.

Getting there: Indirect flights from Cork, Dublin and Knock start from €569.

It’s only fitting that a spiritual stay takes you to the banks of the Ganges, in yoga’s birthplace of India. The Phool Chatti Ashram is built on an ancient pilgrimage route on the tranquil outskirts of Rishikesh. Surrounded by mountain forests, hiking paths and little else, their seven-day course is specifically for beginners and intermediates, and helps to focus on improving the mind, body and spirit. Each day, the wake-up bell sounds at 5.30am, after which there’s a non-stop schedule of activities from laughter yoga to Hindu religious rituals to philosophical lectures. It’s not ideal for those who need their creature comforts; instead, think of it as an intensive course that teaches yoga as a lifestyle.

The seven-day course including accommodation and meals costs €130. phoolchattiyoga.com

Getting there: Indirect flights from Dublin to Dehradun start from €498.

Be warned: your core is in for an intense workout at Surya Retreat’s yoga, pilates and surf package. Taking place in the heart of Fuerteventura, this keenly priced seven-night retreat involves daily yoga, pilates and meditation classes at the retreat or on the beach, half-board meals, three surfing sessions and a well-earned massage. All the surfing excursions take place with an instructor, and equipment and wetsuits are provided, making it great for beginners too. Retreats run all year, and happily, temperatures don’t usually dip below 20 degrees on this Canary island. Don’t forget to parade your newly-sculpted abs of steel upon your return.

Getting there: Direct flights from Dublin to Fuerteventura start from €95. Surya is a 30-minute transfer from Fuerteventura Airport.

Yes really. Because who wouldn’t love to admire a puppy while attempting the downward dog? If you’re heading to London, time it with a session by Pets Yoga, who bring in kittens, puppies or baby rabbits to motivate yoga lovers. As well as being supercute, their cuddles are found to relieve stress. Their classes run with animals brought in from pet owners, licensed breeders or charities; they’re let loose around the room so the animals learn to socialise with people in a relaxed environment. Doesn’t that sound purrfect?

Getting there: Direct flights from Dublin, Cork and Shannon to Stansted start from €30.

Fear ye not: a break that combines yoga with indulgent cooking classes merely employs the idea of balance in holiday form. There’s a number of dedicated retreats in the foodie hotspot of Italy, but for more flexibility on the timings and itinerary, Il Castelfalfi is a top choice. Atop the rolling Tuscan hills, the hotel and its 100-hectare grounds cover an abandoned village, now restored for guests to explore. Complimentary yoga classes are already included, and there’s also a number of classes to try out their world-famous cooking: create a classic Neapolitan pizza in the trattoria Il Rosmarino, or harvest vibrantly-coloured produce from their kitchen garden to create some fresh-tasting dishes. If you’re feeling active, head out on a truffle-hunting adventure with their well-trained dog, Bianco. Or indulge in a spot of wine-tasting here, the home of Chianti. Heaven.

Rooms with bed and breakfast start from €280. castelfalfi.com

Getting there: Direct flights from Dublin to Pisa start from €46. Il Castelfalfi is a 45-minute transfer from Pisa Airport.

To eat and retreat healthily, look no further than The Courtyard Yoga Retreat in Co Wicklow. They offer weekend and day retreats packed according to themes like gratitude and compassion, or on January 26th, new beginnings. Expect two yoga classes daily, activities like country walks and coffee hours, but more importantly, divine vegan food that’s become synonymous with the stay. Owner and Ballymaloe-trained chef Olivia Kelly employs intense flavours from her global travels to create dishes like South American bean stew and Maldivian mango curry, along with vegan snacks and treats like vegetable muffins, coconut and rhubarb crumble, and cakes that use their garden-grown strawberries. Put it this way: you won’t go hungry.

Weekend retreats including accommodation and meals start from €430 per person. thecourtyardretreat.ie

Here’s one for those who love holidays as much as yoga: a six-day urban retreat in the heart of Barcelona. The regular flights and convenient location mean it’s easy to get there, and travellers can tailor how much they prefer to retreat, or dive into Barcelona’s bustle. Days start off with an early morning yoga class, followed by a vegetarian brunch. Activities – like acro-yoga, vegan cooking and voice workshops – continue until it’s time for sunset yoga. Try to coincide a stay with the full moon, when the hosts put on live music to celebrate the cosmic event.

Getting there: Direct flights from Dublin to Barcelona start from €47.

We can’t verify the health benefits of salt caves, which claim to detoxify and help alleviate respiratory illnesses like asthma, but it’s certainly special to undertake poses on a bed of Himalayan rock salt within an underground cave. Give it a whirl in North America’s largest man-made salt cave, located in yoga’s modern spiritual home of California. The Himalayan Salt Caves offer a range of yoga classes like Reiki, Slow Flow and Yoga Nidra, as well as activities like meditation and sound healing classes. All take place in rooms laden with pink-tinged salts imported from Pakistan, with the temperature and humidity tightly controlled to give an optimal experience.

Getting there: Direct flights from Dublin to Los Angeles start from €416.

Crispr gene-editing technology: what is it and why you need to know about it
3

The importance of relationships and belonging
5

Jersey Boys writer: ‘Frankie Valli is a dark soul. He is not a happy guy’
8

What’s really inside your bar of Cadbury Dairy Milk?
9