Ever wanted to stay at 'The Shining' hotel? 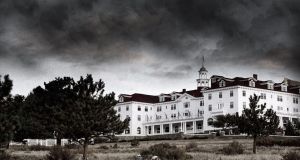 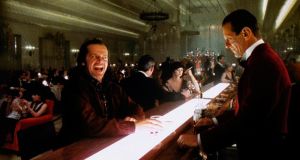 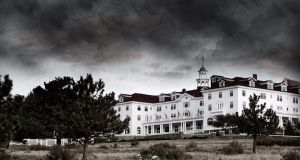 It was raining as we drove into town, a cloud of mist hanging heavy over the mountains. GPS was spotty, but I was sure we would find the hotel without a map. Our inner voices would guide us there. Our shining, you could say.

Besides, this was no squat motel that sat along the roadside. This was the historic Stanley Hotel, which despite its spooky reputation was supposed to shine white like a wedding cake against the landscape.

I was right. A twist down a hillside and the Stanley showed itself, hulking in this quaint but bustling vacation town. It was inviting, almost regal, not at all forboding. As we pulled in and unpacked our bags, the mixed messages kept coming. A rainbow appeared over the town.

FO Stanley, co-creator of the Stanley Steamer automobile, founded this place in 1909. He was a sick man who found the crystalline air in Estes Park to cure him, and so he stayed. The Stanley became a magnet for well-heeled folks, including President Teddy Roosevelt and John Philip Sousa.

While the Stanley’s origin story may actually be more magnificent – cured by clean air? – it’s told way less often than this one:

Stephen King and his wife, Tabitha, came to the Stanley in 1974 as it was about to close for the winter. They spent a night in room 217, which turned out to cure what for King was a sickness equal to to FO Stanley’s: writers’ block.

King, a tour guide told us, got somewhat blotto and experienced things. He dined in the empty dining room, talked to the hotel bartender. He saw a coiled fire hose and imagined it coming to life. He had dreams about his son running down the halls, screaming.

He got to writing. What ensued was The Shining, King’s novel about an alcoholic writer and his family looking after a historic hotel for the winter.

The hauntings at the Stanley started long before King’s visit. According to Stanley lore, housekeeper Elisabeth Wilson walked into room 217 in 1911 and lit a lantern. There was a gas leak, and an explosion followed. She lived through the blast, but is said to haunt the room to this day, tidying guests’ luggage.

A variety of other spirits may also haunt the place, including a free-spirited hippie girl and a cigarette-smoking maintenance man, little children as well as the spirits of FO Stanley and his wife.

The Stanley was fictionalised by King into the Overlook Hotel. For Stanley Kubrick’s 1980 movie version of The Shining, the outside scenes were shot in part at the Timberline Lodge in Oregon, the inside scenes on soundstages.

King disliked Kubrick’s movie and thought the sets captured none of the Stanley’s flavour (not to mention the destruction of the character Wendy Torrance via Shelley Duvall’s trembling interpretation). And in the movie, room 217 became 237. There are theories about why Kubrick did that, but suffice to say 217 remains the Stanley’s most popular room. You can stay there, if you’re lucky enough to book it.

In 1997, a King-approved Shining remake featured the real Stanley. That miniseries might seem a more appropriate version for the Stanley to show on the hotel television 24 hours a day. Instead, the Stanley shows an uncut version of Kubrick’s movie in every room.

The hotel, where a poster of Jack Nicholson’s face hangs in the tour office, seems to struggle with its identity in relation to King. The Shining is not the Stanley’s movie, and yet there’s really no escaping it.

In the spring, the hotel hosts an annual Stanley Film Festival of horror movies, and stages a Shining Ball around Halloween. The latest addition, being maintained by workers during our visit, is something born of Shining culture that never really existed at the hotel: a hedge maze.

Though the architecture is elegant and the history is rich, the place tends toward feeling like a tourist trap. And for the horror fans and ghost hunters who flock there every year, it is.

There was no air conditioning in our room, which is fine most of the year in crisp Colorado. In mid-June, it was just verging on uncomfortable, but we affixed a fan into the open window.

Our room, on the extra-haunted fourth floor, was small but pleasant, with new, remodelled features and an old-time appeal. Stare at the prints of antique photos for a while and you start to get why King was so enamoured with what might have happened here.

My boyfriend Josh and I took a night time ghost tour, one of several tours available for a fee, including a paranormal investigation tour and one focused on history and architecture. Our tour almost didn’t happen. After leaving several voice mails requesting a spot in the weeks leading up to our stay, I still wasn’t booked. (Arrange your tour online to make sure you get in.) The guide squeezed us in.

We went into the Stanley’s concert hall, sniffed for wafts of perfume, waited for pianos to start playing themselves. We took pictures of ourselves in mirrors, looking for uninvited guests. We sat in a billiard room where ladies once watched men play, looking for orbs in photos.

We ended the tour seeking FO Stanley’s face on various surfaces and getting an abridged download on the pop cultural elements of the hotel. For instance, the guide said, when Jim Carrey was filming Dumb and Dumber at the Stanley, he got so freaked out that he checked out of room 217 within hours.

The guide was intent on setting us free into the place with a sense that We Would Be Haunted.

Well, if nothing else, drinking seemed to work for King. After the ghost tour, we went to the hotel’s Whiskey Bar, which has a 37ft antique Rothschild bar and the largest selection of whiskey, bourbon and scotch in Colorado. Choices included the Redrum, a concoction of Brugal Añejo Dominican Republic rum, and the Fresh Blood Orbed Paloma, with Corazón Blanco tequila.

We opted for a simpler Old Fashioned and a 17-year-old Cadenhead small batch single malt scotch, served with an elegant eyedropper of water. We leaned on the bar and listened to the bartender tell stories of King.

A couple of sceptics, we didn’t really believe in the hauntings. Of course we didn’t. We sat there debunking how various creepy things happened on the ghost tour, deciding a mysterious door that kept closing had an uneven doorjamb because the floor had shifted.

“Do you think it’s possible?” Josh asked. “Not knowing is what makes it fun.”

We walked through the hallways, through the second floor with mirrors at each end where a frightened King once headed back to his room. We stood outside room 217 and snapped a photo of the door. A dead quiet hung in the air.

When we got to our room, every channel on the TV was out except for Channel 42. The one that showed The Shining.

How to make Michelin-starred spaghetti in 10 minutes