The €9.6 million upgrade of Quinta do Lago’s North Course has resulted in it being hailed as Europe’s best new golf course 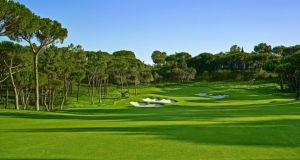 The upgraded 18th hole of the North Course in Quinta do Lago, Portugal 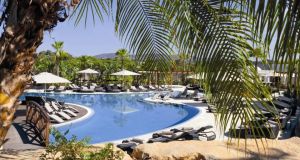 The luxurious pool area at the five-star Conrad Algarve hotel

T he reopening of Quinta do Lago’s North golf course under the stewardship of Ryder Cup-winning captain Paul McGinley couldn’t have been more timely. The launch in the heart of Denis O’Brien’s Algarve resort coincides with McGinley’s victory at the helm of Europe in Gleneagles. As the Dubliner emerged out of the early morning mist along with course architect Beau Welling and O’Brien for a ceremonial tree planting on the 18th fairway, the scene stealer was the Ryder Cup itself – delivered forth from a high security metal box by its steely-eyed chaperone (a full time job by all accounts) and whisked away as quickly afterwards.

It was a suitably audacious finale to what’s been a serious overhaul of the resort. In the last six years O’Brien has spent €29 million upgrading the facilities at Quinta do Lago. The upmarket resort throughout the boom years served as the playground for throngs of well-heeled golf-mad Irish who arrived there during the holiday season. We know what happened next, and while the economies of both Ireland and Portugal tanked, the sport of golf itself acknowledged a longer-term challenge.

As McGinley puts it: “The number of players is not increasing at the rate we would like. A lot of people find the game very difficult and so too do many of the professionals. The idea of the golf course here was to make it playable. We don’t want to intimidate the golfer.”

It was the priority of the North course’s revamp to make it playable for all with something of a challenge in there too. The €9.6million upgrade took place in a record time of 10 months, and came in ahead of budget too, something of a rarity by any ambitious build standards. Certainly regular visitors to Quinta do Lago who attended the launch said they were incredulous weeks previously that the new course would be complete on time. However not only was it complete but in fine order too.

The most noticeable improvement is in the course’s playability. There are vast swathes of fairway to play with, and more green to access on the approach. That said it’s not a course to just blaze away off the tee and hope for the best, smart iron play is required but well rewarded.

“We wanted to make it as visual as possible so you can see where your ball is going - the 18th being a great example with 85 per cent of the green now being visible. We want repeat business so that people return wanting and knowing they can do better,” McGinley says.

For women, the tee advantage is significant, so much so on some holes that the challenge is somewhat diminished. However it’s a balancing act, and there’s no doubt an accessible course for all will ultimately deliver return business. The greens were in excellent condition, and deceptively tricky on holes where getting up there had seemed relatively simple.

The verdant setting is beautiful too, and it’s always a nice diversion to ogle the luxury villas dotted around the course and see exactly how the other half might live. The new North Course had barely opened for business when it was named Europe’s Best New Golf Course at the recent World Golf Awards – a significant gong in getting Quinta do Lago back on the wishlist for European golf nuts. With a number of excellent courses within minutes Quinta is clearly investing with the intention of offering a more complete golf experience to a regular returning market.

And Quinta’s location in 2,000 acres of the Ria Formosa Natural Park, and right on the sea means there’s plenty to do when golf isn’t on the agenda. It’s a walkers’ and birdwatchers’ paradise, and by night there are good dining choices. On the accommodation front The Four Seasons, Monte de Quinta and the Quinta do Lago hotel are all firm favourites, and there are self catering and villa hire options too.

If money is no object, one of the more exciting recent additions to the Quinta landscape is the Conrad Algarve. It’s a five star behemoth right in the heart of the resort, which would give the Taj Mahal a run for its money on the marble quotient. The rooms are super luxurious, while the bar has a good line going in cocktails and it’s popular as a pre-dinner pop-in venue.

Quinta do Lago’s location 20 minutes from Faro airport and its sunny climate for much of the year make it something of a no-brainer for a short getaway from sodden winter golf.

Róisín Ingle: I’m menstruating as I write this. And I’m mad as all bloody hell
10 Tesla wants an electric Golf rival
Real news has value SUBSCRIBE