Track down geothermal springs, active volcanoes and waterfalls in a supersized jeep 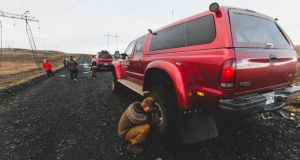 The roads in the nature reserve are suitable only for 4x4 vehicles (off-roading is illegal without snow). 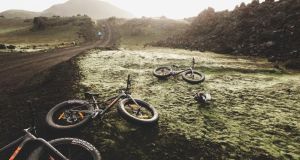 Fatbiking is proving popular in Iceland: the oversized tyres and robust mountain bike frames are perfect for dealing with the unforgiving landscape. 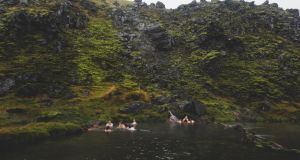 Take a dip in a hot spring any time of year before taking a hike.

In the mid 1960s, in search of the nearest thing it could find to the moon, Nasa decamped to the Icelandic highlands. The volcanic desert, almost entirely uninhabited, and with barely a plant or bush in sight, was as close to the moon as they could imagine, with the surface often bursting up into loamy dark mountains. Unlike the moon, though, these often hide giant basins filled with water and are ringed by bursts of chromatic colour.

Arnar Gauti Markússon, co-owner and tour guide for Midgard Adventure, is cheerfully spinning his oversized 4x4 up the steep sides of one such hill, while explaining how his grandfather used to go fishing here with Neil Armstrong.

The company takes its name from the word for the human world in Icelandic mythology. Two of its joyfully giant jeeps are named Thor and Odin. Here, in a landscape that beggars belief, the myths are never far away.

The company organises trips deep into the Icelandic highlands, with activities altered en route to match the weather and the ambitions of its punters. When we arrive in October, summer is reaching its end, before a late, beautiful burst of warm weather produces extraordinary colours and light. Even the ice-cool guides who have spent their whole lives in these hills are impressed. Our plan had been for snow-based activities but with not a snowflake in sight, we’re instead driving, biking and hiking to some of the most pristine parts of Europe.

Everyone in Iceland, it seems, has three jobs. Markússon is also a sound engineer and works on the family farm, located just 9km (5.5 miles) from everyone’s favourite unpronounceable mountain, Eyjafjallajökull. In the wake of that volcano’s eruption in 2010, a fine powder filled the houses in the surrounding area, covering every surface, while in the distance the locals could hear the sound of drums, as explosions powered along beneath the Earth’s surface. The family moved their livestock to safer pastures, but lost a year’s worth of farming in the process. And you thought your cancelled flight was hassle.

On this trip, we are rarely far from Hekla, one of Iceland’s most active volcanoes, and immortalised by Cistercian monks, in the wake of a 12th-century eruption, as the “gateway to hell”. The volcano is now overdue, though it is famously erratic. The last eruption was in 2000. Before that it had erupted each decade since 1970. Adding fuel to the fire are scientific readings which say Hekla has been gathering magma, and its internal pressure is considerably higher than before its last eruptions.

After deflating our tyres to deal with the rough roads, we head in convoy for Landmannalaugar, which is in the Fjallabak Nature Reserve and contains some of the most popular hikes in the country. The roads are only suitable for 4x4 vehicles (off-roading is illegal without snow), although dim visitors often try to make it in hire cars (we pass several even at this late stage in the season). There is also a regular bus service, in a giant converted truck (in Iceland, they like pimping their rides).

The area is on the edge of the Laugahraun lava field, which formed after an eruption in 1477. The geothermal hot springs mean you can take a dip at any time of year in the steaming hot waters, before picking a trail and wandering into one of the oddest landscapes on the planet. The trails wind through pimply walls of black twisted rock, so detailed it looks like it will crumble to the touch.

Strange vents belch steam and sulphuric smells out at regular intervals. The colours are stunning, thanks to the rhyolite magma shot up by still active volcanoes and the Brennisteinsalda “sulphur wave” mountain. The silence is almost total; almost no animals live in this part of the world – apart from elves, of course, which any Icelandic person will tell you hide their craggy features in the twisted rock.

The hiking options are varied, from our entirely manageable two-hour walk, to the most popular four-day Laugavegur, which shares its name with downtown Reykjavík’s most popular shopping street. And the only way to end them is with a fine lunch in the camping mountain hut followed by a sprint and swim in the bubbling ponds.

Iceland’s landscape is also home to an embarrassment of waterfalls. The Fossa river has the spectacular pairing of Háifoss and Granni, the former fully 122 metres tall. From here the views of the surrounding landscape are formidable, with hardly a handrail or fence to ruin the raw look of the land. Of course, the fall is home to an ogress who has been known to terrorise those who throw rocks in her river, disturbing the trout that she lives off.

For those with a little less vertigo, the small Gjáin valley is a lot more accessible. A small fall feeds pools and rivers that cut up a series of islands, accessed by small bridges. Viewed from above, the whole thing seems like a pleasant informal park put together by someone tired of the sturm und drang of the landscape elsewhere. It’s a magical, lush little pocket of scenery, and well worth the diversion, though in the high summer months the long lanes of traffic might put most people off.

From there we head for higher country, and get to grips with the landscape in a more modern way. Fatbiking is proving popular in Iceland: the oversized tyres and robust mountain bike frames are perfect for dealing with the unforgiving landscape, while being light enough to make steep ascents more than manageable. Spinning along volcanic ash tracks with just the mountains above for company is a strange, stunning experience.

After several hours, and with the light failing, we pile back into the jeeps and pick up old farming routes on our way home, but not before a stop off in an old cave, which was previously used to house horses and sheep.

A few of us try the local delicacy of fermented shark (it smells much stronger than it tastes; plenty of French cheeses will do a better job of screwing your face up in disgust), knocked down with shots of Brennivín schnapps.

Meanwhile our guides Helga Lucie Káradóttir and Stefnir Gíslason play and sing traditional Icelandic songs and perform a vikivaki folk dance, as the sun gives those colours one last moment of glory, before we head back towards the nearest thing the Icelandic highlands have to civilisation.

Laurence Mackin travelled as a guest of Midgard Adventure

Midgard Adventure runs a huge range of adventures, with itineraries dependent on the season and the weather. Prices start at roughly ISK19,900 (€160) per person for guided hikes to ISK249,900 (€2,012) for an all-inclusive five-day Icelandic Kaleidoscope tour. The company can arrange pick-ups from the airport also, in those fabulous oversized superjeeps.

Wow air flies direct from Dublin to Reykjavik from €69.99 each way. See wowair.ie

The Hrauneyjar Highland Centre is a warm, clean hotel with a range of facilities from private apartments to shared accommodation for those with sleeping bags. The décor is functional but comfortable, and it’s an excellent base from which to explore the area. During the high season expect it, and its homely restaurant, to be packed with hikers and explorers (accommodation options are limited so book far in advance). Standard doubles are €161 per room per night.

The luxurious four-star Hotel Ranga is a more upmarket option. On the evening we arrive, several guests are hopping into a helicopter outside. The warm, lodge-like interior houses an excellent restaurant, with the outdoor hot tubs and observatory the best place to watch the Northern Lights from. Rooms from €299. See hotelranga.is