Could we drive the family on holiday to France in an electric car?

How would our electric vehicle (and our patience) cope with 3,000km of low carbon driving? 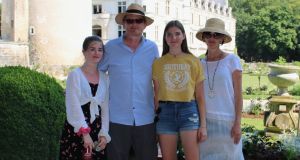 Simone, John, Sophie and Jane at Chateaux Azay-le-Rideau in the Loire Valley.

The Swedes have a word for it: flygskam, or “flying shame”. Growing anxiety about the environmental impact of travel means more and more people are now thinking twice about flying. Egged on by their young climate campaigner Greta Thunberg, train travel within Sweden grew by 8 per cent this year, while domestic flights are down by a similar margin.

While you can drive or take the train from Sweden to the European mainland, to leave Ireland you have a choice of the boat or plane. Either option inevitably involves emissions, but the ferry is, by some distance, the less harmful option.

Having driven an electric vehicle (EV) for just over a year, a trip to France seemed like the ideal excuse to road-test the technology and infrastructure to see how it would cope with 3,000km of low-carbon driving over a couple of weeks.

France is also probably the best place in Europe for clean energy. Almost 75 per cent of its electricity is nuclear-generated, with fossil fuels about only 9 per cent. As a result, less than 20 grams of carbon dioxide (CO2) is produced per kilometre driven in an EV. Our much dirtier grid means an EV driven in Ireland generates almost five times as much pollution. Yet, this is still twice as clean as its diesel or petrol counterparts.

Maximum realistic range on our four-year-old Tesla is about 370km (unlike with mobile phones, battery life in an EV doesn’t drop noticeably after a couple of years). We set sail from Dublin Port in late June. The hassle-free nature of boarding a ferry reminds me that, to borrow a phrase from Thomas Hobbes, modern airline travel is mostly nasty, brutish and short.

Disembarking in Cherbourg the next morning after a pleasant 19-hour crossing, we headed up the Normandy coast to visit some of the D-Day landing sites, stopping for lunch at Utah beach. Our destination on the first evening was the pretty seaside town of Honfleur, some 185km from Cherbourg. However, some bad timing en route meant we had to drive right past a supercharging station in Caen in order to make our rendezvous.

By the time we arrived, there was barely 100km left on the battery, and the Caen charger was more than 70km away, which left little scope for error the following day. One of the first things you learn when driving an EV is that each day is planned around the location of charging points. Every detour has to be considered, and driving behaviour subtly shifts towards coaxing as much range as possible.

After Normandy, we headed south. The most direct charger location on our route was in Le Mans, but this was nearly 200km away. With only about 210km left in the battery, we judged this too tight, requiring a 45km detour back to Caen to power up. A quick top-up on the supercharger can put about 200km of range onto the car in about 20 minutes, which is enough time for a coffee and croissant, but as the battery fills up, charging speeds slow down markedly, taking well over an hour for a complete fill.

The next destination was an overnight at Château de Perreux, a quirky but delightful old hotel etched into the cliffs on the outskirts of Amboise. Serendipitously, the hotel provided free 11kw per guest for EV charging, meaning we left the following day with our full 370km range restored.

From here, our ultimate target was the town of Décize, but since there was no charger at our destination, we stopped off along the way to top up again in Bourges, about 210km from Décize. By this time, the record-smashing late-June heatwave had central France in its grip, with the hottest temperatures ever recorded in the country. Mercifully, the car’s air conditioning was up to the job, with no significant loss of range as we kept our collective cool.

Globally, June 2019 was the warmest June on record. The French heatwave was technically categorised as a once-in-500-year occurrence – the fifth such “once-off” event since 2003. Unless emissions are dramatically cut worldwide, this can only get worse.

The next part of the trip was to have been five days on a rented (admittedly, diesel-powered) boat exploring the canals of the Loire Valley, but we had to jump ship after just three days, defeated by the stifling heat. As we limped back into Décize, it was a suffocating 41C in the shade. Being able to pre-cool the EV remotely via your phone is a gimmick you really only appreciate in a heatwave.

The staff at “Le Boat” could offer little but sympathy, so that meant an unscheduled extra two nights’ accommodation had to be found. This took us to the picturesque town of Saumur, 320km east. But first we headed back to Bourges for a quick top-up, then on to Tours, a university city about the size of Cork, for a final charge before completing our journey.

We were by no means the only EV adventurers in central France. We encountered electrics from as far afield as Norway and the Netherlands. Well over half of all new car sales in Norway in 2019 are fully electric, thanks to coherent government policy and world-class charging infrastructure.

Ireland lags far behind, and Richard Bruton’s announcement in April of just €20 million over four years to upgrade the entire national charging network indicates the farcical nature of the Government’s “plan” to have nearly a million EVs on the road by 2030.

As the heatwave abated, we visited some of the Loire Valley’s treasures: its great houses, including Chateaux Azay-le-Rideau, de Chenonceau and the breathtaking gardens of Chateau de Villandry. As our teenagers had never been to Paris, this was next on the agenda, with three nights booked in an expensive but middling Citadines aparthotel close to the Bastille.

The City of Light never disappoints. From the highs of the Eiffel Tower to boating on the Seine, Paris is a banquet for the senses. It is also chronically choked with traffic, and while there are plenty of on-street EV points, few people seemed to be using them.

From Paris, it was about 360km back to Cherbourg, but we broke the journey with a final overnight in the faded grandeur of Chateau de Quinéville, where German field marshall Erwin Rommel reportedly stayed in 1944 when inspecting the formidable nearby defences.

Our total car journey around France generated about 60 kilograms of CO2, or 15kg per passenger. The same trip using a combustion engine would have created more than half a tonne of CO2, as well as lots of fine-particulate emissions from diesel burning.

So, what’s the final verdict? Yes, driving an EV is more hassle than its fossil fuel counterparts. Yet, when you add up the combined savings in fuel costs, carbon emissions and air pollution, it seems a small price to pay.

John Gibbons is an environmental writer and commentator.

Getting around in an EV

For our trip we opted to use only Tesla’s dedicated supercharger network. It’s a high-speed service providing 120kw of power, which is more than twice as fast as the best ESB chargers in Ireland today. Stations are typically about 100km apart, and it’s extremely easy to use. If you opt for public charging, there are about 24,500 points in France, though most are 50kw or slower. To use these, you need to pre-register for a smart card, and prices vary. Visit Plugshare.com or Chargemap.com.

1 Plan your day: expect delays and detours and keep some range in reserve.

2 Schedule meals if possible for when you need to charge up fully; you’ll have plenty of time.

3 Resist the temptation to cruise at 130km/hr on the motorways; it eats battery life.

5 Not having an engine does mean more space for luggage (and wine!) in the front trunk.