Cycle Series: into a pocket of rich Kerry history

A loop, starting and ending in Tralee, takes in areas associated with St Brendan the Navigator and Roger Casement 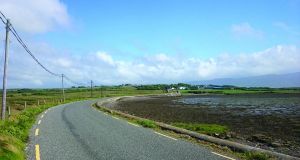 The countryside between Barrow and Churchill.

At the roundabout follow the R551 north in the direction of Ardfert and Ballyheigue. The first section of road between Tralee and Ardfert is a mere 8km and is generally flat, except for one small hill beyond Ballyroe Hotel.

On entering Ardfert, a small detour is optional, to visit the 12th-century Ardfert Cathedral and the nearby Ardfert Abbey. These buildings are dedicated to St Brendan, who was born in the vicinity in AD 484. Brendan the Navigator, a fifth-century monk, is said to have discovered the New World and sailed to North America long before the Vikings or Christopher Columbus,

Continuing on towards Ballyheigue, take the first left towards Banna Strand, heading westwards. You can continue to the strand itself and take in some of the fresh Atlantic air, but our route takes a left turn, at the crossroads, just beyond Sir Roger’s campsite.

Within 1km, the monument for Sir Roger Casement comes into view. It was here that Casement and his two companions rested after coming ashore from the German submarine U-19 after it had failed to rendezvous with the German cargo ship Aud in 1916, which was due to land a consignment of arms to assist the imminent rising in Dublin.

From the monument, take a right at the fork in the road; follow the twisting route through the sand dunes before the road straightens out and moves away from the coast, travelling over tidal salt marshes at Carrahane.

It was close to this section of the route that the unfortunate Casement sought refuge as he struggled on, weak and with a high fever. About a kilometre on, the tree-lined area of McKenna’s Fort, an ancient “fairy fort” or ring fort, can be seen on the left, just off the road. It was in this area that Casement was hiding when he was arrested by the RIC police.

Taking the next right turn (made distinctive by a black pole with a yellow walker sign), proceed along the narrow road. Turn right at the T-junction, and then take the second right, signposted for Tralee Golf Club. Along this stretch of road there are fine panoramic views of the Slieve Mish Mountains, stretching from Castlemaine in the east to Dingle and beyond to the west.

The road then sweeps down towards Barrow Harbour. Take a left at the T-junction. (Right will lead to the popular Tralee Golf Club, designed by Arnold Palmer.) Follow the road over the causeway and humpback bridge and up the hill to Churchill.

Just before the church and graveyard, take the right turn, signposted for Fenit, and enjoy a nice fast descent towards the hamlet of Chapeltown along the south side of Barrow Harbour and on towards the townland of Tawlaght in the direction of Fenit.

Turn right at the T-junction, just beyond the Old Lighthouse Hotel, into Fenit village. In Fenit there are various options to refuel. There is a public toilet close to the beach, located opposite the Tralee Bay Sailing Club and Sailing School. For something a little different, it is possible to cycle partly up the pier (be careful of the old railway tracks) and explore Samphire Island and the statue of St Brendan, or just relax close to the small beach overlooking the lighthouse on Little Samphire Rock and reflect on a job well done. On a clear day the mountain ranges on the Dingle Peninsula are clearly visible from here. Mike’s cafe and the Westend Bar are nearby.

On leaving Fenit, most of the route back to Tralee is accompanied by Tralee Bay, which sits peacefully to the right. The route passes quickly through Kilfenora and up the hill to The Spa. After leaving The Spa village, take the first road to the right, after the cricket pitch (it is not signposted!).

This lovely narrow but rolling road leads back into Tralee via the Kerries area of the town. From here on continue through farmland and past eye-catching properties, before rolling down into the more densely populated Spa Road.

On reaching the T-junction at Kerins O’Rahillys GAA club, take a left turn past the Bon Secours Hospital and on to a mini-roundabout. Take the first exit off the roundabout, following signs for Ardfert and Fenit on to the R874. Continue straight ahead until the traffic lights. Take a left turn on to the R551. Your starting point is less than 2km away.

Verdict: An area of historical importance in north Kerry – from Brendan the Navigator to Roger Casement.

Start/finish: The starting point for is from the Mounthawk area of Tralee. From the centre of Tralee follow the R551 in the direction of Ballyheigue and Fenit. Within 2km, there are parking facilities located just to the right of Mounthawk roundabout. It finishes 2km from the starting point.

Edited extract from Cycling Kerry – Great Road Routes by Donnacha Clifford and David Elton, published by The Collins Press, price €14.99. It is available from all bookshops and online from collinspress.ie

Aortic dissection: Getting to the heart of the matter
3

‘Moving to Ireland was the best decision I ever made’
10