A 007 ski experience in Austria, or a mid-term break in Westport?

Travel Bag: The best travel deals from around Ireland and abroad this week 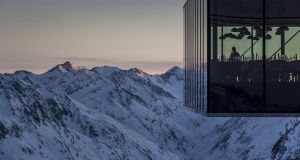 Solden ski resort: You’ll be stirred but not shaken by this high-tech Austrian resort

With ski season on the horizon, one of the most exciting destinations beckoning slope-slayers is Sölden in the Austrian Alps. Movie buffs will recognise it from James Bond’s Spectre and, surrounded by perfectly groomed slopes and colourful larch forests, it’s easy to see why this high-tech resort was good enough for 007. Skiers are welcome from as early as October, with the legendary FIS Ski World Cup taking place there this year from October 26th. Stay at Das Central Hotel from €200 per person per night, based on two people sharing on a half-board basis, and if you’re really keen to relive the movie, have lunch at the hotel’s mountain-top restaurant, ice Q, which starred as the Hoffler Klinik in the 2015 Bond film. central-soelden.com

Those with the mid-term break in their sights should look to the Hotel Westport, which is offering a three-night getaway with breakfast each morning and dinner on one night from €439 for a family of four sharing. Available on Monday, October 28th, to Sunday, November 3rd, guests can avail of a special discounted family pass to Westport House Halloween Fest, or just relax in the pool, jacuzzi and spa. hotelwestport.ie

Dancing in the Dam

The Dylan hotel in Amsterdam is welcoming dance-music fans this autumn with a special package. During the Amsterdam Dance Event, from October 16th to 19th, the five-star is offering a three-night package including VIP tickets, the use of bicycles to get around the city, and a hearty recovery breakfast served until noon each morning, from €1,500 based on two people sharing a double room. Once suitably danced out, the hotel’s chic Nine Streets neighbourhood has plenty more to offer with its independent boutiques, cafes and Heineken Museum. dylanamsterdam.com

Cork’s Victorian Quarter is having a renaissance. Cask is one of the most exciting bar and gastro experiences in the Rebel County right now, while Hotel Isaacs has just opened the first phase of 11 new fully-serviced apartments. Adjacent to Greenes Restaurant, each apartment has been designed with eco-friendly elements, including using their famous courtyard waterfall feature as a cooling mechanism. Apartment rates start from €150 with a minimum two-night stay at weekends. hotelisaacscork.com