A breezy, pulse-raising walk together on one of these undemanding circuits is a gift 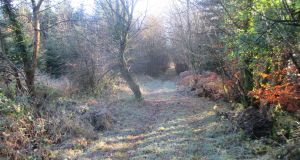 Most of us will doubtless be glad of a Christmastime escape from the clutches of the workplace. A few days cooped up en famille, however, and cabin fever can triumph over camaraderie. We might then fantasise about escaping the claustrophobic clutches of domesticity and dyspeptic over-indulgence.

A great way to relieve festive anxiety is by wrapping up warmly and heading outdoors for a bracing winter walk. If your pleasure is a ramble that conveniently comes oven-ready and fully basted, set off with the entire family on one of the undemanding circuits listed below.

After a breezy, pulse-raising experience, you will likely return enriched and relaxed while having a much-enhanced appetite for the Christmas turkey.

Gougane Barra, Co Cork
From west Cork’s Gougane Barra Hotel, pass the entrance to St Finbarr’s Oratory and continue by the serene lakeshore to the barrier where cars pay a fee. Buggies are exempt, however, so you continue as the tarmac doglegs into the deep-sided Coomroe Valley.

Continue by the gurgling waters of the nascent river Lee and soon you will observe a steep gully in the great cliffs above some open ground on your left. Here, you tell the kids of a memorable War of Independence scene. It was down this gully in 1921 that 100 volunteers of Tom Barry’s flying column made a daring escape under cover of darkness from encircling British troops.

Afterwards, the trail loops past a car park and several convenient picnic tables to rejoin your outward route. Retrace your steps to Gougane Barra Hotel, making a 6km outing.

Emo Court, Portarlington, Co Laois
A bit of Venice isn’t something you’d expect in rural Ireland, but our greatest Palladian mansion stands, somewhat incongruously, amid rural Co Laois. Once the seat of the Earls of Portarlington, the estate, which remains Europe’s second-largest walled park, is now the property of the Irish people.

To explore this fine monument of the Ascendancy period, follow the yellow arrows from the car park along a sylvan lane and then cross a field to reach an ornamental lake. Now tag the shoreline, as occasional views of the great neoclassical house appear across the still winter waters.

Cross a footbridge and then continue past the walled gardens of the estate and along a tree-canopied pathway to regain Emo Court after an exquisitely varied one-hour ramble.

Knockreer Estate, Co Kerry
Ideally located near Killarney, the Knockreer Estate is a car-free haven of beauty and tranquility. Start this easy 5km stroll from opposite St Mary’s Cathedral and follow the gurgling waters of the Deenagh river to the shores of Lough Leane. Here, the path tags the lakeshore while offering awe-inspiring views over the Lough to monastic Innisfallen Island and the great angular peaks of MacGillycuddy’s Reeks.

A right turn then takes you the short distance to the 15th-century stronghold of Ross Castle, which you can explain to younger companions is an excellent example of the tower houses favoured by medieval chieftains.

Return to your starting point while watching out for native Irish red deer grazing nonchalantly on the surrounding parkland.

Doneraile Wildlife Park, Co Cork
Laid out by renowned landscape gardener Capability Brown, north Cork’s Doneraile Park was once the seat of the wealthy St Leger family. It offers a series of waymarked walks around 500 acres of managed parkland that all start from the estate car park.

For exploration are lakes, woodlands and sweeping parklands, with some lovely cascades and ponds that greatly enhance the natural beauty of the setting. There is also a deer park with extremely friendly animals that kids will adore.

The full circuit of the park is a 5km buggy push, but there are several shorter, equally enjoyable alternatives.

FOR FAMILIES WITH OLDER CHILDREN

Killamuck Bog Loop, Co Laois
As one of Ireland’s first planned towns, Abbeyleix richly rewards visitors with fine period architecture. Another reason to come is the captivating 8km Bog Loop that begins from the town and offers a salient lesson in biodiversity.

Starting from the Manor Hotel, you soon follow a woodland path, known as Lord’s Walk, which directly connected viscounts of Abbeyleix Demesne with the railway station.

Later, a greenway leads to Killamuck Bog, which is managed by volunteers as a wildlife habitat and special conservation area. A boardwalk gives access to its boggy heartland. Here, kids can get up close and personal with the intriguing process of environmental change that laid down the Irish peatlands over a 10,000-year period.

An old railway line then returns you to the trailhead.

Slievenamon, Co Tipperary
From Ballypatrick village, follow signs for Slievenamon and park beside an enclosed lane. The lane leads to open mountainside where an obvious track heads directly for the summit, where a huge cairn is reputedly the entrance to the Celtic underworld.

Point to a large boulder known as Fionn MacCumhaill’s seat and explain that it was from here the great warrior watched candidates for his hand in matrimony race to the summit. He cheated and helped his favourite, Gráinne, win. Unimpressed by this devotion, she eloped, thereby inspiring the tragic melodrama Diarmuid and Gráinne.

Return by your ascent route having spent about two hours walking.

Lough Avalla Loop, Co Clare
Traversing an abundance of natural habitats, this 6km circuit starts from Mullaghmore Crossroads near Corofin. A green lane leads towards the Jeuken Organic Farm before diving right into a hazel forest and passing a holy well.

Upwards then to spectacular limestone karstlands for which the Burren is famous. Fractured limestone benches now lead to a Neolithic burial cairn offering superb vistas over the Burren landscape.

As the trail gallops east beneath immense cliffs, your eyes are drawn to the scene-stealing contours of limestone on Mullaghmore – the aptly titled Queen of the Burren.

Finally, the trail traverses timeless farmland, mostly unchanged since ancient times, before decanting you to the trailhead.

The Stairway to Heaven, Co Fermanagh
Despite years of gloomy predictions, the Irish Border will, thankfully, remain “soft” this Christmas. This is great news for those who wish to explore the abundant outdoor attractions offered by Northern Ireland.

One of the latest is the Legnabrocky Trail. Generally known as the Stairway to Heaven, this consists of a well-constructed new trail that conveys walkers high into the Cuilcagh Mountains. From the trail car park, about 1km from the Marble Arch Caves, follow a 6km gravel path to reach a boardwalk.

This lifts you spectacularly upwards to a viewing platform offering great views across the lake-strewn Fermanagh countryside.

Afterwards, return by your route of ascent after walking for about 3.5 hours.

Glencolumbkille, Co Donegal
If it’s a wild, untamed coastline you want, then Glencolumbkille ticks the boxes. To get pulses really racing, follow the blue arrows from the firestation along an ancient pilgrim path, rich with megalithic tombs, standing stones and cairns.

Then tag a switchback track to reach a Napoleonic signal tower offering breathtaking ocean views. Here you can follow the arrows back to Glencolumbkille after a breezy 2.5-hour hike or, if you are suitably experienced, continue along the remote clifftop to the enchanting little harbour of Port.

Kids will enjoy exploring the poignant ruins of a nearby deserted village, before tagging an ancient mass path back to Glencolumbkillle after about 4.5 hours.

The Spink, Glendalough, Co Wicklow
From the Upper Lake, Glendalough, head towards the National Park Office, then follow the arrows upwards beside scenic Pollanass Waterfall, and continue ascending along a switchback forest track.

Soon you will encounter a boardwalk leading into forest on the right. Follow this until the trees disappear on your right, allowing breathtaking views into Glendalough. Continue over the highest point of the Spink which offers sweeping vistas across the compelling bleakness of the Wicklow uplands.

On your descent, keep to the path heading diagonally right to the Glenealo river. Cross the small bridge and then follow the river downhill into Glendalough on a constructed path.

Pass some historic mine workings and continue along the north shore of the Upper Lake to the trailhead after a memorable 3.5-hour outing.

For more walking route suggestions, search for Walk for the Weekend at Irishtimes.com