The stable door: Butchers and scientists were the winners 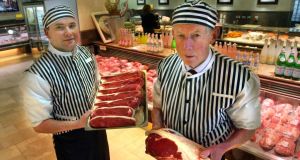 Out of the block: James Nolan with his father, Andy, at their shop in Co Kildare. Photograph: Brenda Fitzsimons

The horse-meat scandal was revealed on the evening of Tuesday, January 15th, 2013. The next morning the retreat back to the local butcher’s shop began.

“It was absolutely incredible, says James Nolan, of Nolan’s of Kilcullen, in Co Kildare. “If you went out and spent money to market and advertise your business, you couldn’t possibly have achieved what the horse-meat scandal delivered.”

He says trade increased by about 14 or 15 per cent last January and is still about 5 or 6 per cent up on pre-“horsegate” levels. “Beef has been the big winner of the year for us. We’ve seen a huge rise in the demand for beef.”

Martin Carey, a butcher in Bandon, Co Cork, also says the queues in his shop started straight after the horse-meat revelations. Not all the new customers stayed, “but, by and large, most of them did”. He has noticed more younger customers coming in and interacting with butchers. “There’s another interesting trend, as we have a lot of men shoppers now.”

He also noticed an increased demand for sausages, of which he sells 14 types. He says that when people started to question what went into their burgers, they also questioned sausages.

Dave Lang of Associated Craft Butchers of Ireland says the horse-meat scandal was “a serious boost” for butchers. Some butchers saw an increase in trade of 40 per cent after the scandal, “but most people were up 10, 15 or 20 per cent,” he says. “The amount of burgers butchers sell is phenomenal. Overall trade is up 10 per cent, but burgers are up about 50 per cent.”

Butchers weren’t the only ones to see a boost in business. The Food Safety Authority of Ireland asked a Dublin company, Identigen, to do the inital series of tests that unearthed the 29 per cent equine DNA content in the meat of a Tesco frozen burger.

Dr Ronan Loftus, commercial director of Identigen, says he had no idea of the frenzy that would follow. The company had to hire more people to meet the demand from companies wanting to have their products tested.

He says the controversy was a lightning rod across the industry. “There was a lot of interest at that time from companies looking at their products and asking were they implicated in this whole process. The question was, ‘Is there horse in my product?’ People were testing a pork chop to see if it really was a pork chop.”

The panic subsided, but as thoughts turned to more permanent solutions, Identigen found itself in the right place at the right time. It has devised a DNA TraceBack system, which is being used by processors, suppliers and retailers here and abroad.

“Business has been growing internationally,” he says. “We have operations in the US and Canada, and we’ve seen good uptake in those markets. We have about 60 people working with us now.”

Minimising your risk of stroke during pandemic is crucial
9